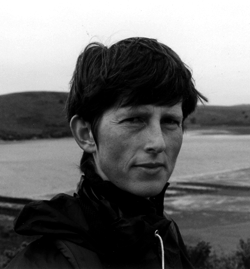 Alberta writer Robert Kroetsch’s long-standing mantra of literature being ‘a conversation’ is echoed in the origins of Vancouver’s Nomados Literary Publishers. Over email, co-editor/publisher Meredith Quartermain writes of their small beginnings:

We first started Nomados in 2002 with a book called Wanders, which had come about from fax correspondence between Robin Blaser and Peter and I. Robin would fax a poem to us and I decided to write a translation poem back. When we had 19 pairs, we thought ‘let’s put them into a book.’

I had taught myself an Adobe type-setting program in order to self publish my own chapbooks, and I thought I could contribute to the literary community by publishing other writers this way, in the more or less time honoured tradition of emerging poets.

It wasn’t so much that I thought something was missing as a way to join in the conversation.

Missing the conversation, she says, yet opening with a work produced as a conversation between two writers. She continues:

I see our publishing activity, which is really a micro-press, as part of the whole range of public speaking activities that go on now, including blogs and websites. It’s part of the social impulse that brings people together; through talking to each other in these various ways, they formulate knowledge in an ongoing fluid way. Let’s call it the trickle up effect. Publishing gathers ideas, makes them visible. They flow together taking news to places unknown. At our launches I’m tremendously warmed by interactions between the diverse audiences they attract. It’s really exciting to be part of that.

That’s the way I see a lot of micro-press activity. Some presses have very specific missions, targeting specific audiences or types of writing, but a lot of them are doing it because ever since printing was invented, the quickly-produced, easily-circulated, low-budget pamphlet, has been around.

Edited and produced by Vancouver writers/critics Peter and Meredith Quartermain, Nomados has published some three dozen chapbooks since it began. Nomados has achieved both an impressive roster of writers, and a wealth of critical response, including a lengthy piece on Lisa Robertson’s Rousseau’s Boat in Jacket (Australia). They’ve also been one of the few Canadian chapbook publishers (along with NO Press, BookThug and above/ground press) to engage with writers and poetics beyond the Canadian border, something that very few Canadian chapbook publishers have been known for over the years, with Nelson Ball’s 1960s-era Weed/Flower being a notable exception.

As impressive as their publishing output has been, Nomados is not the Quartermains’ first joint publishing venture. From the late 1970s into the early 1990s, they ran Slug Press, producer of an array of poetry pamphlets and broadsides, most of which appear to have been produced for free distribution at a variety of classroom talks, conferences, readings and tributes in and around Vancouver. Many of their authors included those in their geographic immediate, with the occasional author who came to town for an event, such as George Bowering, Basil Bunting, Robert Duncan, bpNichol, Sharon Thesen, Charles Bernstein, Robin Blaser, Robert Creeley, Daphne Marlatt, Tom Pickard, James Laughlin, David Bromige, Helen Adam and Phyllis Webb. Of Slug Press, Meredith Quartermain says:

Slug Press involved hand-set letter presses with movable type that we ran in our basement from the late ‘70s to 1997, when we were forced to give away the equipment to SFU because we couldn’t move it to our new location. Nomados produces books digitally using electronic files, which I take to a laser printing company. Slug Press printed mainly broadsides and one or two books – not many since it is very time consuming to set an entire book in movable type.

We now have a letter press again which we operate in our garage as Keefer Street Press. We do broadsides on that and we’ve done one chapbook. The output is pretty small and there is no list.

Casting about for a name, we were drawn to Robin’s poem ‘Nomad’ which we published as a broadside through Slug Press in 1995. The word comes from the Greek nomas, pasturing. We chose the genitive form of the word for our name. We thought of ourselves as wanderers, eclectic in what we would publish. Aware that the ground is always shifting, needing a rambling approach to the labour of sense-making. We wanted to avoid the droughts in theologies and romanticisms.

In his Slug Press article, Schlesinger goes on to say that ‘Among the 52 broadsides and pamphlets published between 1979 and 1995, there is a curious smattering of established and emerging writers. As if their scholarly writing required further testimony, their editorial stance indicates that the Quartermains read far and wide, and do not ascribe to any particular creed, camp or school of poetry. In the midst of Slug’s eclecticism, these works share in a high standard of literary and aesthetic quality. They print poems they celebrate, and do it beautifully.’ I don’t think it would take any stretch of the imagination, given what they have accomplished through nearly 40 chapbooks published through Nomados, that their standard continues, making their current work on Nomados an extension of their previous publishing via Slug Press.

Aside from their work through Nomados, the Quartermains are quite accomplished individually. Meredith Quartermain is the author of a number of collections of poetry, including Spatial Relations (Diaeresis, 2001), The Eye-Shift of Surface (Greenboathouse Books, 2003), Vancouver Walking (NeWest Press, 2005), Matter (BookThug, 2008), Nightmarker (NeWest Press, 2008) and Recipes from the Red Planet (Toronto ON: BookThug, 2010). What becomes noteworthy, further in her interview with Reimer, is in how Meredith Quartermain says her own work has changed due to interacting with the writing and authors that have come through the press. She writes, ‘I have found it enormously instructive to work closely with other authors on publishing. From Susan Holbrook, I learned about list poems. From Margaret Christakos, I learned about procedural poems, from Rachel Zolf I learned about structuring a conceptual poem, from Louis Cabri I learned to value the rich texture of sound morphology, from Larissa Lai I learned about pronouns. My writing has changed with this awareness, as I think will be clear in my next book, coming out next year from BookThug.’ On the other side, Peter Quartermain is a noted academic, as Kyle Schlesinger, in his piece ‘SLUG PRESS’ in the ‘Canadian Small Press / Micropress’ issue of Open Letter: A Canadian Journal of Writing and Theory (Twelfth Series, Number 4, Fall 2004), discusses, briefly:

After completing his doctoral thesis on Hawthorne and New England Puritanism in 1959 at Nottingham University, Peter spent a year as a Post-doctoral Fellow in American Civilization at the University of Pennsylvania, and two years as a Visiting Assistant Professor at Mills College in California (now a hotbed for poetry and book arts alike) before making his way north to the University of British Columbia. Peter’s scholarly interests turned toward contemporary writing in the ‘60s. He claims that friendship, literary correspondence and a marked visit from Basil Bunting in 1970 did much in the way of clearing the field for the literary corpus that would come to inhabit the pressroom for the next couple of decades.

Pages: 1 2 3 4 5
This entry was posted in ESSAYS and tagged publishing, Small Press. Bookmark the permalink.
Born in Ottawa, Canada’s glorious capital city, rob mclennan currently lives in Ottawa. The author of nearly thirty trade books of poetry, fiction and non-fiction, he won the John Newlove Poetry Award in 2010, the Council for the Arts in Ottawa Mid-Career Award in 2014, and was longlisted for the CBC Poetry Prize in 2012. His most recent titles include notes and dispatches: essays (Insomniac press, 2014) and The Uncertainty Principle: stories, (Chaudiere Books, 2014), as well as the forthcoming poetry collection If suppose we are a fragment (BuschekBooks, 2014). An editor and publisher, he runs above/ground press, Chaudiere Books, The Garneau Review, seventeen seconds: a journal of poetry and poetics, Touch the Donkey and the Ottawa poetry pdf annual ottawater. He spent the 2007-8 academic year in Edmonton as writer-in-residence at the University of Alberta.