Another technique to heighten the intensity of a decision is the coupling of urgency and immediate consequence. Telltale’s award-winning The Walking Dead Game uses timed responses (in that you have a limited amount of time to make a choice), and also lets you know that other characters will remember your choice.

The first time I remember experiencing timed responses was in Javier Maldonado’s 2007 work Masq – a clever, extreme branching narrative. Many parts of Walking Dead remind me of Maldonado’s techniques. What happened while I was playing Walking Dead was that I would have to quickly click on a response and then would get upset because it misrepresented me. Being upset about misrepresentation could only occur because my choices were ‘remembered’ by the characters (see Pic 10). With this design cue, I was warned that other characters would remember what I said or did, and at times they would respond accordingly. For instance, I told the neighbours outside a young girl’s house that I was a neighbour. It was a lie I told to make them feel comfortable around me. Instead, they noted it and so I got the impression it made them feel less comfortable around me. 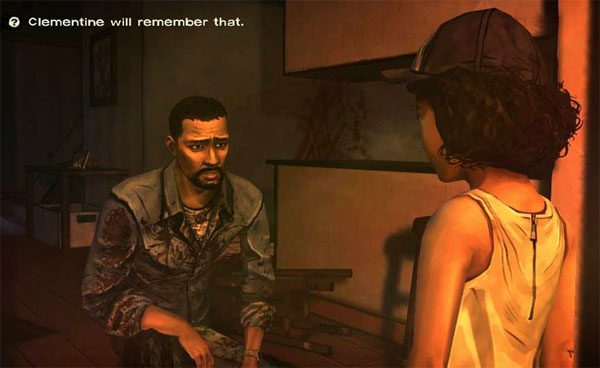 Pic 10: Screenshot from The Walking Dead by Telltale Games

Another example of a rush response was when I had to choose between saving a young boy of a family I was travelling with or saving the adult son of the owner of the property I was staying on. I went with the child. And then, when the owner asked why, in the heat of the moment I chose to respond that I was worried for the boy, rather than choosing the response that represents the way I like to see myself: ‘I thought I could save both!’ So that is the way I’d like to be remembered; it became a persistent personality test. My actions make me. There are other ways this game facilitates emotion, including tension-inducing devices such as forecasting, limited vision, and restriction of movement. I chose to highlight a technique, timed and remembered choices, that involves putting myself on the line in some way.

Indeed, in this short piece I’ve reflected on just a few devices for facilitating an emotional experience in an interactive work. There are certainly more techniques, and many more games that facilitate emotion. Here I’ve highlighted a handful of approaches I have found interesting, such as facilitating intuition and projection, limiting ability, accountability for choices, and understanding myself through choice. In many cases, there is a repeated idea: leaving room for the player to see themselves. Indeed, emotions are highly personal phenomena. Yet they are also universal, no matter what the trigger a poem or a game, a desert or a tiny room.