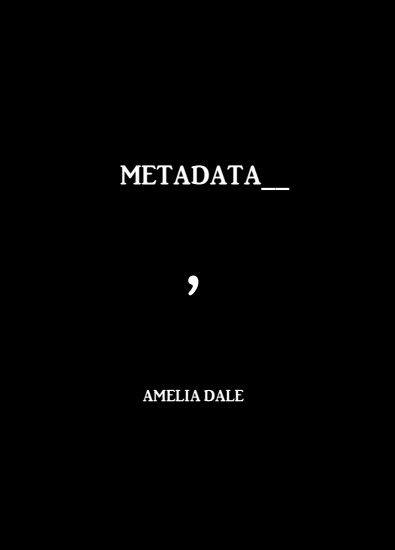 The question what are we to do at and with the limits of language presents itself as the central question in the two books under review here. That they frame themselves as poetry means that the context in which this occurs is different from art or graphic design – two fields into which both could easily be placed. One does not ‘read’ these works but apprehends them.

They could be situated in a longer history of visual and concrete poetry from the Greek Alexandrian School to George Herbert’s pattern poems to Apollinaire’s Calligrammes to Brazil’s Noigandres to Bob Cobbing to Pete Spence to a vast range of other poetries, many of which are collected in the Sackner Archive in Florida. What then are we to make of visual poetry, which is some sort of limit point, and what of these works within that lineage?

Amelia Dale’s short book Metadata is ‘takes its cue from (George) Brandis’ monumental attempt to store countless ‘electronic web addresses’ until they become stale. Like Brandis, Metadata is preoccupied with the staling materiality of proliferating information.’ The book begins with a quote from Brandis and is followed by web addresses and is followed by word plays on ‘metadata’ (retadate, detatdata, metzdata, metafata, metadafa, metagaga). The next section is the longest – it is the letters of ‘metadata’ repeated on various pages with considerable open space around each letter and carefully arranged. This section is reminiscent of Kenneth Goldsmith’s Gertrude Stein On Punctuation. All of which begs the question – how original, if that is a sought after attribute, or how derivate is Dale’s work? It is, like all things, an invention and a repetition. As a work that responds to its context – to Minister Brandis’s intervention into Australian privacy laws – it is relevant. But its politics are so subsumed that I found it hard to decipher ‘a message’. To be certain it is not a homage, or a paean, but its criticism is underdeveloped within the frame of poetry, so that it becomes an entertaining thought rather than an attractive alternative. What this means might be considered too for much other visual poetry – as a pre-cursor to conceptualism where one need think of the idea and then let go of the work, or at least the expectations to read it in the same way one could a sonnet.

A Loose Thread is a re-presentation of stenographic script. It takes shorthand and twists, turns, re-organises it in such a way as to present wry and pithy social observations. There are sections on ‘War’ (poems include the use of signs for ‘refugees’, ‘information intelligence’, ‘occupation’) and ‘Climate Fury’ (poems include the use of signs ‘aftershock’, ‘tsunami’, ‘cyclone’, ‘howling winds’) amongst a great many more. Thalia is adept at expressing the calligraphic power of the script into an easily apprehended form and with certain poems there is a great concurrence between the visual medium and the word. ‘Forced labour’ looks a great deal like a worker hoeing or tilling the ground (132). ‘Life giving’ looks a great deal like the sun rising (146). ‘Time’ looks like a dharma wheel (165). But these connections are there for readers to make themselves. This is in some sense what the limit is about – that we need to interpret by looking closely at the shapes on display. To my mind, it was most similar to Christian Dotremont’s work, but his was given full range of power by gallery display. When I saw a retrospective on him at the Pompidou Centre in Paris in 2012, it had an altogether arresting quality because of the framing. Thalia’s A Loose Thread, in a book with cheap paper (similar in quality to Dale’s), lacks that because it comes to us as an object even as one could imagine an altogether more affecting engagement in an art gallery where we can take a critical distance and bring with us different expectations.

Doubtless there will be claims that these works are radical precisely because they bare little resemblance to ordinary language, or plain speech as it were. But this might be both to reify the frames of plain speech and its antithetical Poetry and to read the work too generously. What constitutes experimenatalism should not necessarily be founded on a mythical reference point, lest we confuse paradigmatic challenges with abstractions, but on a sense of engagement with questions that rest lest on sureness and more on inquiry. By playing so heavily with repetition, and being minor variations on a theme, these works do seem to experiment. This though gives them a boring draftly quality that undermines their initial impressionistic power.

This entry was posted in BOOK REVIEWS and tagged Amelia Dale, Robert Wood, Thalia. Bookmark the permalink.
Robert Wood grew up in Western Australia. He has interned for Overland, worked for Australian Poetry, edited for Peril and Cordite Poetry Review, been a columnist for Cultural Weekly and is on the faculty of The School of Life. He is the author of History & The Poet and Concerning A Farm.