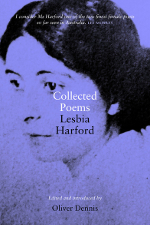 In the foreword of this long overdue volume, Les Murray writes that he considers Lesbia Harford to be ‘one of the two finest female poets so far seen in Australia; the other has to be Judith Wright’ (xviii). This is an extravagant contention, but it is not without foundation. Further, Murray’s claim warrants being extended beyond the confines of gender for, to my mind, Harford should be just as readily compared to some of Australia’s finest male poets including Les Murray, Kenneth Slessor, A. D. Hope, Bruce Dawe, Douglas Stewart, David Malouf and David Brooks (albeit that the tenor of Harford’s poetry is decidedly less conservative than some of these poets). Accordingly, it is quite tragic that Harford has, up until now, occupied such a minor place in Australian literary history for, as this volume amply attests, she produced what can only be described as some of Australia’s most evocative poetry.

Born in 1891 and dying in 1927 at the age of only thirty-six from the combined effects of pulmonary tuberculosis and a bacterial infection of the heart, Harford published very little in her lifetime and held so strongly to her uncompromisingly modern and free-spirited vision that she turned down opportunities for publication. Indeed, she refused to give Percival Serle, renowned Australian biographer, permission to publish one of her poems because her need to live an authentic life took precedence over concerns about her artistic after-life: ‘Your anthology will be read in many places for many years. I would not care to be recalled to the memory of distant friends by the poem you have chosen … You see, I take my poetry seriously and I am in no hurry to be read’ (xx). It is fortunate that Harford took this approach because the fluid nature of her sexual identity and her unselfconscious ability to express this within her poetry would, no doubt, have met with rejection and/or hostility at the time that she was writing. Being in no hurry to publish thereby gave her the freedom to commit wholeheartedly to her unflinchingly honest and searingly personal poetic vision. Moreover, it ultimately worked to preserve the wonderfully uninhibited nature of her poetry for posterity. During the years that she was writing, it is highly unlikely, for instance, that the following words from her poem ‘I can’t feel the sunshine’ would have been published:

Harford’s reference to Sappho carries more than a little weight, because if there is one poet that she most resembles it is Sappho. While Oliver Dennis, the editor of the collected poems, notes the Janus-like nature of her writing in its ability to look ‘both forwards and backwards’, he largely links the latter capacity to ‘Pre-Raphaelite influences’ (xix) and at another point, suggests that her poems ‘recall those of Shakespeare, Keats, Emily Dickinson and Edna St Vincent Millay’ (xxii). While one cannot argue with these assertions (particularly in relation to the openly bisexual and often controversial American poet St Vincent Millay), his claim that ‘she left behind three notebooks containing some of the finest lyric poems ever written in Australia’ (xix) is lent more authority if one takes Harford’s direct invocation of Sappho as a portal to her poetic sensibility. As Dennis notes, ‘Harford is said to have sung her poems aloud, memorably on the Manly ferry,’ (xix) and certainly most of Harford’s sensual and melodic poetry, like Sappho’s, appears to have been composed to be sung out loud. Instead of being accompanied by a lyre, however, Australia’s musician-poet and modern day version of Sappho was fittingly enough accompanied by the rolling waves against one of our most iconic modes of transportation.

The trouble with a collected edition of poems is that it often contains work that would be best left unpublished. Some of the poems in this volume are what can only be described as far from memorable. Slight in nature, they really only serve to give us a stronger understanding of the governing themes of her poetry (e.g. beauty, love, nature, death, war, industrial working conditions) and thereby do not help to cement her rightful stature as one of our best poets. The pedestrian and highly repetitive sing song love poem ‘Sitting here daylong’ stands as an example of Harford at her worst:

As to ‘the finest lyric poems’ that she left behind, there are plenty. These include: the simple but highly effective homoerotic poems ‘Once in the early morning’ (16), ‘I love to see’ (68) and the aforementioned ‘I can’t feel the sunshine’ (17); the elegiac poems ‘Ours was a friendship in secret, my dear’ (30), ‘The hot winds wake to life in the sweet daytime’ (31), ‘Somebody brought in lilac’ (31), ‘Now you are dead do you race the wind’ (32) and ‘Hecate’s Due”’(35); the marvellously liberated ‘Fatherless’ (48); the exquisitely delicate ‘Today they made a bonfire’ (26); and the profound and moving meditation on heterosexual love ‘I’m like all lovers, wanting love to be’ (72-3) which arguably rivals Judith Wright’s poem ‘Woman to Man’. This poem with its punchy rhyming couplets is extremely resonant:

Then there are the poems that sharply express the oppressive nature of love ‘You want a lily’ (85) and ‘Sometimes I think the happiest of love’s moments’ (91-2). The former is so pithily blunt and dark terms of its phrasing that it could very favourably be set alongside the best of Sylvia Plath’s work:

Harford’s beautifully concise and eloquent poetry is also exemplified in the compact but vivid poem about her husband ‘Pat wasn’t Pat last night at all’ (115) and the secular poem which reaches for religious transcendence ‘I am no mystic. All the ways of God’ (129).

In Harford’s poem ‘My mission in the world’, the speaker claims:

This is exactly what Harford achieved, and this necessary and important volume of her collected poems makes this more than evident.

This entry was posted in BOOK REVIEWS and tagged Lesbia Harford, Sappho, Shale Preston. Bookmark the permalink.
Shale Preston is an Honorary Research Fellow in the English Department at Macquarie University. Her key research interests are Victorian Literature (specifically the works of Charles Dickens) and 19th, 20th and 21st century poetry. She is a former winner of Sydney University’s Henry Lawson Prize for Poetry, Women’s Words Competition, and the University of Sydney Union Literature Competition. Her publications include Dickens and the Despised Mother: A Critical Reading of Three Autobiographical Novels (2013) and the co-edited Queer Victorian Families: Curious Relations in Literature (2015) which examines a diverse range of fiction and poetry in the 19th century.