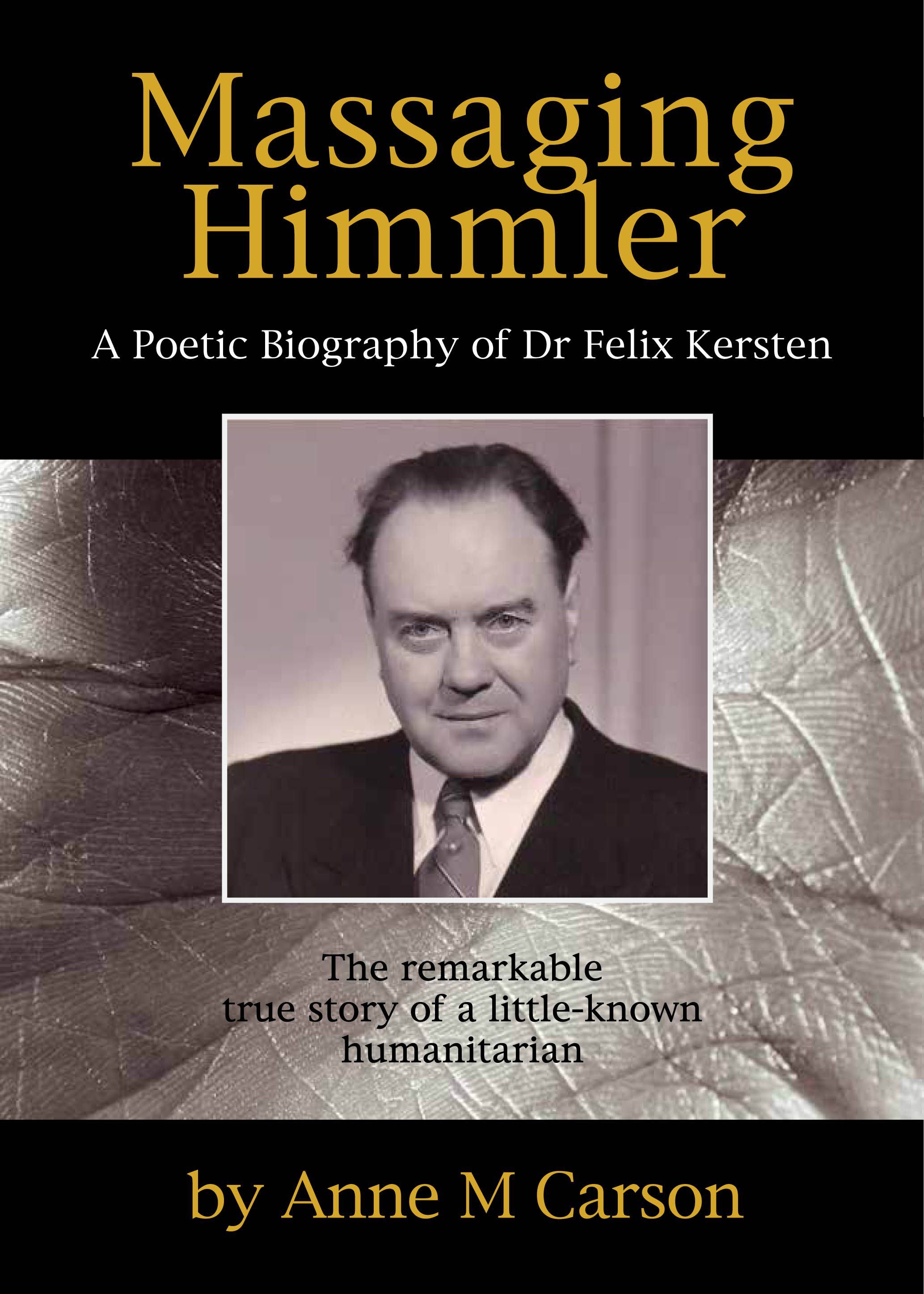 ‘The world today is a sick world,’ wrote Estonian-born Dr Felix Kersten in 1947, ‘and it was made so by a group of sick men.’ Dr Kersten knew about the diagnosis and treatment of sickness – he was a healer, a physiotherapist and masseuse. Practitioner of a style of ‘deep, neural massage,’ Kersten was educated in ancient Tibetan and Chinese lineages of medicine and his healing powers were highly sought after by the social elite of interwar Europe; clients responded to the exceptional sensitivity of his hands, ‘able to detect / the smallest movement of muscle, nerve.’ An appointment as Physician to the Dutch Queen secured Kersten’s reputation and ensured a steady demand for his services, but he consented to treat only those patients who he deemed capable of total cure. For migraine-wracked insomniacs, for bent bodies with wrangled nerves and twisted guts, Kersten delivered his rigorous and painful therapy. The frequent result was great relief, if not complete cure.

In 1933, one of Kersten’s ‘sick men’ was appointed Chancellor of Germany. Heinrich Himmler, Hitler’s second-in-command and head of the Nazi SS paramilitary unit, was another: a ‘weedy’ man with a ‘narrow chest’ and a ‘weak chin’, Himmler suffered from debilitatingly painful stomach cramps that at times left him prostrate and writhing in pain. An old patient of Kersten (an industrialist desperate to halt the Nazi nationalisation of industry) hatches a plan to open up a covert channel of influence within the Nazi party – Kersten is persuaded to take on Himmler as a client. In 1939, Kersten found himself deep within the National Socialist Headquarters in the ‘hushed’ and ‘anodyne’ atmosphere of Himmler’s rooms, at the commencement of several long years of an appointment as Himmler’s personal physician. Dr Kersten disguised an ulterior agenda throughout the course of the entire therapeutic relationship, using his position to secure pardons for political prisoners, labour camp inmates, Jehovah’s Witnesses and others, and ultimately negotiating the release of tens of thousands of Jewish people from concentration camps.

In Massaging Himmler, the ‘hard work’ of physical therapy becomes an allegory for the ‘agony’ of political change. Carson explains in an author’s note how she discovered Kersten’s story by chance and immediately recognised the historical significance and poetic potential of the story: ‘It was an Oscar Schindler-like story,’ she writes, ‘but Schindler had been responsible for the release of 1,100 prisoners – the numbers attributed to Kersten are as high as 600,000. Why don’t we know about him?’ Over more than 200 poems organised into six chapters, Massaging Himmler explores the tantalising ethical, political and poetic possibilities that Kersten’s story evokes.

The tale refigures remedial intimacy as a kind of diplomacy, the therapeutic relationship as a site of acute political intervention against genocidal intent: it’s challenging material for contemporary political sensibilities that feel urgently called to action, confrontation and revolution. In spite of the profoundly impactful results of his actions, Dr Kersten himself is not a poster-boy for any coherent political movement, and perhaps this is the answer to Carson’s question about his absent reputation. Not exactly a committed Buddhist (‘far too in der Welt for that’), Kersten is absorbed by his aspirational epicurean tastes (‘the soul / of a nobleman … trapped in the body of a burgher’), and with ‘apolitical blinkers’ firmly affixed he dines exquisitely with Mussolini (a dinner at which, he proclaims, the ‘fineness of the meat almost finishes me’) even while he schemes with representatives of Swedish, Finnish and American causes. This from the poem ‘Felix talks about his philosophy’:

And about Hitler, Kersten says:

The complexity of Kersten’s position – a powerful agent of anti-Nazism, and a nonpartisan aesthete who submits to the ‘welcome bite of raspberry’ that ‘cut[s] the cream’ – provides Carson with rich material for a challenging character study.

Massaging Himmler is an unusual addition to the already diverse and busy field of holocaust literature, joining works such as Art Spiegelman’s graphic novel Maus (the first volume of which was published in 1986) and, more recently, Bram Presser’s The Book of Dirt (2017). Carson continues the compelling and important work of this field, as events in the changing global political environment continually refresh the relevance of the questions raised by the Holocaust – the ‘battle between good and evil is perennial,’ she writes in her author’s note, ‘and we have much to learn from individuals who are courageous enough to … use whatever power they have to help others.’ Although many of these works use the literary imagination to revivify what was inexpressible about the Holocaust experience, Massaging Himmler stands out in this field for its hybrid status as both biography and poetry.

Pages: 1 2
This entry was posted in BOOK REVIEWS and tagged Anne M Carson, Annelise Roberts. Bookmark the permalink.
Annelise Roberts lives in Melbourne and is a PhD student at the Australian National University. Her research focuses on the poetics of texts connected to the British nuclear testing in Australia in the 1950s, and it is accompanied by a creative project, an epistolary novel. Her poetry and critical work has been published in SubbedIn, Mascara Literary Review, Rabbit Journal and The Suburban Review.