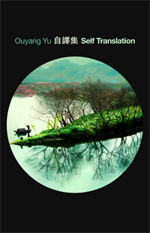 In his often quoted poem ‘An identity CV’, Ouyang Yu describes himself as ‘Australian for the last couple of years, Chinese for the first 43; unashamed of either’. National educational priorities notwithstanding, I have not found the time to learn Chinese. Inevitably though, the ideal reader of this bilingual volume would know a little more of that language than nihao. However, I immediately offer an observation that if this book is not strictly intended for English monoglots, it will have to make do with a considerably smaller readership than the average volume of contemporary poetry.

A characteristic of many of Yu’s most well-known and oft-quoted poems has been a blunt satirical tone, explicitly positioning the reader as ethnic adversary. Take ‘The ungrateful immigrant:’

Here, Yu attacks a straw man, cultivating a persona of the ‘other’ that is unconvincing because of an over-mediated, hegemonic leftist demonology and by his own cultural and temporal distance from a pre-multicultural Australia.

The poems in Self Translation, by contrast, are personal and lyrical: the speaker addresses himself with candour rather than playing to the gallery. It is as if, writing in or from the mother tongue, Yu has allowed the Minority ID badge to fall. Even when he writes, as he does in the foreword, of ‘joining the rank of Rabidrinath Tagore, Vladimir Nabokov, Samuel Beckett …’, the expressed objective is modest: ‘This collection let[s] readers see the gradual growth of my poetic art in my Chinese poems over the decades as I have matured in my command of English and Chinese’.

In Yu’s more confrontational mode, the linguistic awkwardness seems intentional: English is an adopted language to the speaker, who, as is implied, exists in an agonistically defining relationship with the non-immigrant addressee. The reader is induced to abandon culturally restrictive standards of usage like an outdated immigration policy. The same deliberate approach is present in ‘Song for the exile in Australia:’

so that here, the reader is tempted to correct the speaker’s expression to

on realising the redundancy of the third line (its meaning already connoted by the second), to delete it.

Perhaps at the time Yu wrote this poem, his English was less accomplished than it’s now become; still, a deliberate choice has been made to keep the poem in its original wording – together with a related choice to not date the poems or note their chronological order – to preserve pockets of earlier inarticulacy in this somewhat dream-diaristic account of, as the same poem puts it, ‘a season without languages in Australia’.

Another poem, ‘Beautiful Death’, features permutations of the sentence ‘The death of nature is most beautiful’, the speaker lolling the foreign words about in his mind’s mouth. The most linguistically odd section is the middle stanza, reading:

This passage gives rise to a number of uncomfortable questions. First, does the speaker realise that the first line is a double cliche? Is the aptness of ‘a mob of seas’ an accident? And why wasn’t the ‘the’ of the final line tweaked into ‘their’? There is also the numerical disagreement of the subject and verb in the first two lines. The point is that in Yu’s poetry there is no culturally normative standard in play by which to judge.

The awkward freedom of Yu’s approach – transgressing less to achieve particular effects than as a stylistic constant – is consistent with the experience he describes of freedom as rootlessness, and vice versa. From ‘My two women:’

This, of course, is the contemporary liberal understanding of freedom as progressive liberation: we become more free as individuals as we become more self-defining and less defined by identities and roles we have not chosen for ourselves. Ironically, there are signs elsewhere in Yu’s poetry that he feels contempt for Australia as a psuedo-nation, in contrast to his homeland, lacking an authentic culture and historical self- understanding. For example in ‘Sex Notice’, from Moon Over Melbourne:

A second irony in a poem like ‘My Two Women’ is the conventionally gendered personification of the two countries as a foil to the male speaker’s autonomy – revealing, on a more subtle level, his imperfect acculturation to literary mores in the postmodern West.

Jal Nicholl has published poems and reviews in various places online and in print. He also writes and has begun to publish short stories in the horror genre. He lives in rural Victoria with his wife and son and two dogs, where he teaches high school English.

View all posts by Jal Nicholl on Cordite →