Review Short: Philip Salom’s Between Yes and No 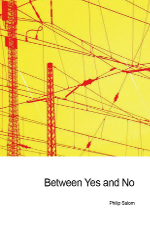 Between Yes and No by Philip Salom
Flying Island Books / Cerberus Press, 2014

Philip Salom is a poet and novelist who has, like several others of his generation, made a career straddling academia and a kind of award-and fellowship-winning literary writing (see the long list on his personal website) that has enabled him to retire in his late fifties to write full time.

Between Yes and No is published by Flying Island, AKA Cerberus Press, in their English-Chinese series of pocket books. Tastefully designed and printed in a serif font on quality paper, these little editions should appeal to students of contemporary Australian poetry looking for a sampler, and might perhaps be profitably offered in a boxed set. Another suggestion I have for this publisher, if they wish to present themselves as a serious concern, is to advertise the price of their books in their online store, which currently operates on an enquiry-first basis. It is actually easier to make a donation than a purchase on this website.

Many of these poems are retrospective and contemplative in tone and subject-matter, as in the opening pair in which Salom reminisces about his youth in rural Western Australia, working on the family farm. These poems are full of detail of that semi-technical variety that, in poetry and fiction generally, conveys a sense of authenticity, presenting the writer’s credentials, so to speak, as in this partial description of (I think) a power generator:

It is not that Salom is afraid to explore subjectivity, although thought and emotion are never free-floating, nor do they climb up on the rugged back of reality only to jump off and spread their wings as in romantic, and much post-romantic poetry. A fine example of Salom’s approach to the big themes is given in the following poem, an elegy for his brother (‘And then, You Said What It Was Like’), beginning with another discourse on farm equipment: ‘Our tractors started on petrol: to heat up the iron block/ of the engine until power-kerosene burnt hard and clean’. It culminates in the image of his brother dying of leukaemia after undergoing chemotherapy: ‘[Lying] there, brain and body filling up with kerosene.’ A poem such as this shows Salom’s detail-driven mechanics at its best, imagery that provides a more than adequate vehicle for the often elusive tenor of his musings.

One of Salom’s thematic concerns is that of finding one’s ‘roots’, as ‘The Family Fig Trees’ makes explicit. Here he contemplates the elusive meaning of the Sephardic ancestry apparent in his family name, the fig trees creating a bridge between Brunswick Junction and the Biblical lands. Again his manner of insinuating theme into subject-matter is apparent in the statement ‘I am hurt by what is lost’, referring beyond the trees with their ‘generations of lichens’ to the ‘Stop[ped]’ and ‘denied’ Sephardic bloodline.

A limitation of what I have called Salom’s ‘detail-driven’ approach, however, is that in this instance the reader is given little idea as to why this aspect of his family’s heritage is especially significant. Perhaps the potential suppression of non-white, or at least non-Anglo, ancestry functions here as a trope – another instance of credentialing where significance is culturally self-evident for the intended audience.

Another class of poem in this volume defines those that step outside the confessional paradigm to explore lives of others, including a nude model, novelist Ivan Klima and a woman who picks up a man while playing the pokies (unless the latter is read as a conceit only). These poems are like scenes from disparate novels, character sketches developed for their own sake or as stories-in-germ. Again, though, the question arises in a poem like ‘Ivan Klima on His World Tour’: what is of especial significance in this subject matter? Readers unfamiliar with this relatively obscure novelist will glean only a fairly generic portrait of the ‘dissident soviet writer’ of a bygone era. The climax of the poem depicts ‘a lecturer ask[ing] what he’d write / now the communists are gone’ – a question tellingly left unanswered. Is ‘the mute language of unchange’, which then intervenes, just a refined way of saying, ‘The more things change the more they stay the same’? Surely the reader is owed more.

Similarly, although Salom’s work is hardly driven by vital allusion and cultural reference, it is a literary technique of which he avails himself from time to time, possibly out of some misplaced sense of obligation, as in ‘As Dante said: the middle years and a dark wood’ (‘The Fabulist Novelist on His Last Leave of Absence’) and Dostoevsky is cryptically – not to mention familiarly! – evoked in passages such as ‘Dost wants to change all the money into words for/ his old-fashioned God’ (‘The Architects of Dost’). What does the Dante reference accomplish beyond absolving the writer from finding his own metaphor? And what on earth is going on in the allusion to Matthew in which Dostoevsky is depicted as a moneychanger?

This is an eclectic volume in some ways, covering a wide range of experience, imagination, memory and observation. All have large roles to play in a performance that is consistently skilful, underpinned by clear, though often complex diction and a graceful prosody. Even if certain poems don’t quite go ‘deep’ enough, each one is certainly a smoothly functioning engine.

This entry was posted in BOOK REVIEWS and tagged Jal Nicholl, Philip Salom. Bookmark the permalink.
Jal Nicholl has published poems and reviews in various places online and in print. He also writes and has begun to publish short stories in the horror genre. He lives in rural Victoria with his wife and son and two dogs, where he teaches high school English.