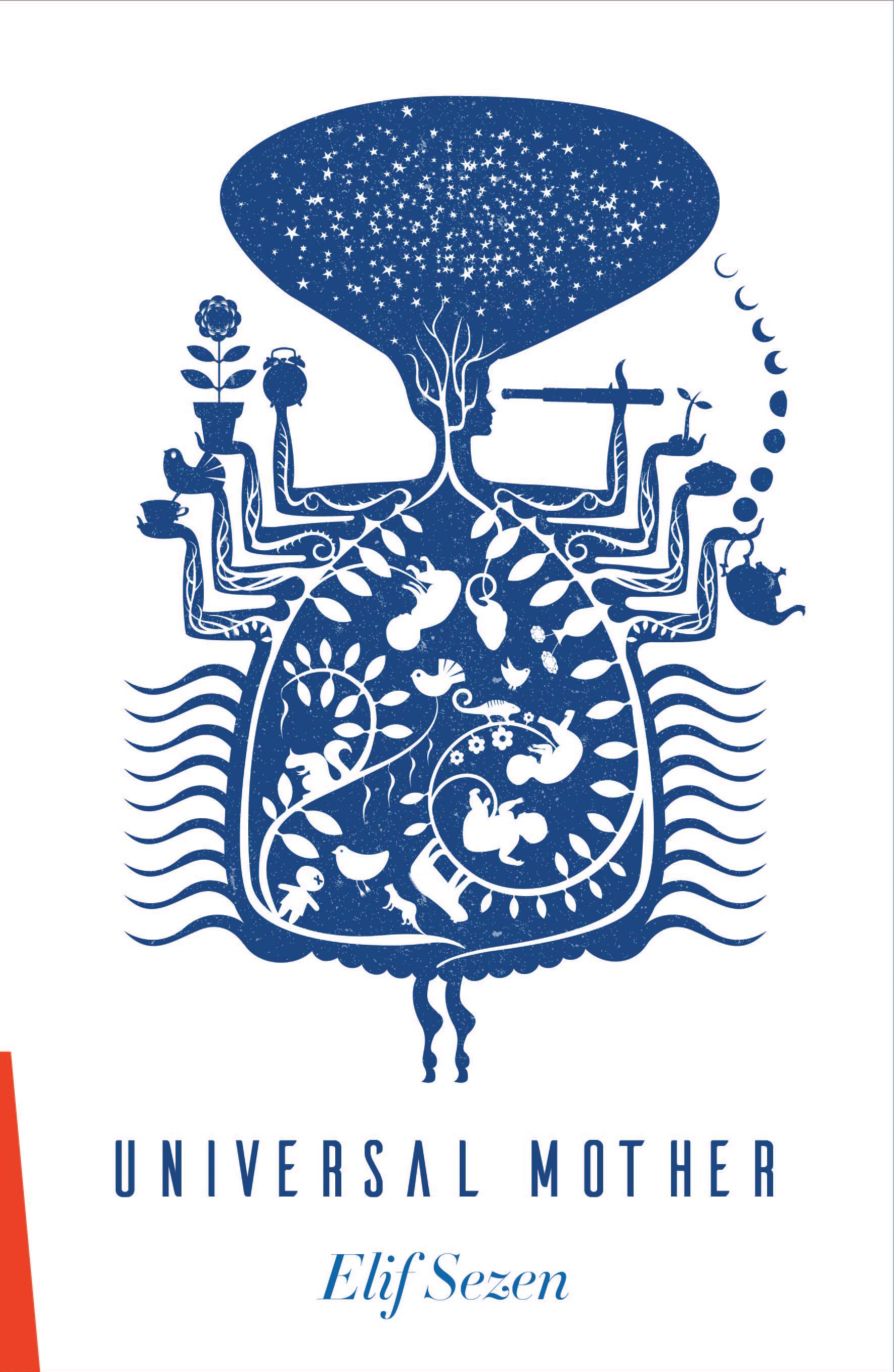 There is something delicious about a collection that doesn’t open itself up to the reader on a first or even second reading and yet compels them to come back to it, something delightful about lines that lodge themselves in your brain and demand a third, fourth, fifth reading to reunite them with the poems they come from.

The great Mughal poet Mirza Ghalib said that poetry was not merely the construction of pretty rhymes and images but mani afirni, the manufacturing of multiple, shifting meaning. In Elif Sezen’s work, Ghalib’s ideal comes to life. Universal Mother is rich with references whose intertextual mix of classical mysticism, mythology, ecology, biology, and pop culture makes it a thoroughly modern collection. Sezen’s knack for traversing centuries in the space of a few lines situates her as a truly transcultural writer.

There is an ethereal quality to Sezen’s work, a certain sense of longing and searching that carries echoes of Rilke and the best of Yeats’s poetry. Sezen’s discussion of ‘absence’ in ‘Two Ghazals’ in particular brings Rilke’s obsession with the concept to mind; while in ‘The Universal Garden’ Sezen writes: ‘A rose is the most silent thing ever / it blinks with a secret innocence’ (3), recalling Rilke’s epitaph ‘Rose, oh pure contradiction, joy / of being No-one’s sleep under so many / lids.’ Her fluent use of mystic tropes can also be traced to the Sufi tradition (Rilke found his rose here as well).

There is a sense of slow but inexorable movement in Universal Mother, like that of the heavens. Whether multi-part meditations or three-line lyrics like ‘Our Absences Merge’, Sezen’s poems take their time to unfurl.

Sezen routinely addresses a ‘you’ but it is evident that this is not the reader. There are several presences in this book. Some poems seem to address the speaker’s mother, but others seem to invoke the ‘Universal Mother’ of the title. Sezen creates the impression of a child talking to a wise and benevolent mother, seeking guidance and reassurance, but also showing her mother the world anew the way that children often do. She reinvents the familiar, reconstructs memories, rebuilds histories, all in a conversational tone that sometimes belies the complexity of what she is saying.

Although universal themes such as the bond between mother and daughter might lend themselves to the obvious, Sezen’s poetry is anything but. The dream sequence in ‘Three types of gravity,’ about jumping off a tall building only to realise death is not what the narrator wants after all, speaks of the way grief makes people act against themselves. It also casts the mother as the daughter’s guide and protector even from beyond the grave – a kind of present absence that Sezen returns to in the last lines of ‘The dead woman’:

The poems demonstrate a mix of spiritualities – references to kundalini energy, Buddhism, and of course Sufi mysticism all sit comfortably side by side – as well as a range of images and registers. Over and again Sezen blends her evidently expansive knowledge of poetic tradition with the everyday in her own idiosyncratic way. For example, she has an odd fondness for amplification using adverbs – ‘definitely’ is one of her favourites – and it stands out, turning up in the middle of an otherwise lyrical line. In ‘She meditates’ she writes: ‘there were children shouting and playing / in the park, and I definitely had to transform into / something else’. Earlier, in ‘Two ghazals,’ she writes:

Although the use of the word seems odd, it creates an immediate and conversational tone that sits well with the mysticism of the collection. In ‘Invitation’ we see Sezen once again connecting the lofty with the quotidian when she says ‘There’s really nothing to fear / and what’s more I cut my hair’.

‘Guests’ indulges in another kind of blending. It begins with an epigraph taken from one of Coleman Bark’s most famous ‘translations’ of Rumi’s work: ‘Out beyond ideas of wrongdoing and rightdoing, there is a field / I’ll meet you there.’ Sezen moves the setting to a house and shifts the tone from mystical to playful, saying:

Sezen’s brief, unexpected addition of scientific taxonomy to her stock metaphor has an expansive effect on the poem. She writes:

There is a spark of joy that runs through this poem, a rush and excitement that makes it stand out from the others in the collection. Emotions fly fast and free here. But this freedom is fleeting; the ending reins it in with:

The change in lineation gives the end an ominous feeling, as if something else looms beyond the little slice of joy in the poem.

That sense of something greater on the horizon pervades the whole collection, beginning with ‘Looking for the blue’. Universal Mother could be read as speaking of the environment, of our abandonment of it, of nature and the earth as the wronged mother from whom we have become estranged. The imagery of the heavens – the stars, the moon, the sky, the Milky Way – all conjure an awareness of the connectedness between our actions and the urgency of climate change. I do not know if this is intentional – perhaps the age of global warming and impending disaster makes such a reading inevitable – but it only adds to the complexity of this already multi-layered collection of poetry.

This entry was posted in BOOK REVIEWS and tagged Elif Sezen, Nadia Niaz. Bookmark the permalink.
Nadia Nuiaz is a Melbourne-based writer and editor. She has a PhD in Creative Writing and Cultural Studies from the University of Melbourne where she teaches Creative Writing. Her work has previously appeared in Mascara Literary Review, TEXT, Strange 4 and The Alhamra Literary Review.