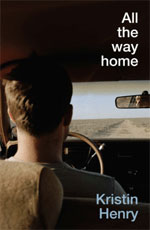 Jesse’s father is painted richly, in few words. Everything we need to know is in the colour of his car (shiny green), and what he carries: ‘a simple case, his son, / a silver hipflask under the dash / and a back seat full of ghosts’. He is popular with the ladies, a charmer, and he readies Jesse for life with a series of sayings and ‘truths’, such as ‘You won’t find God in a church’, and ‘Your mother loved you’. When his father dies, leaving him ‘the habit of moving on’, Jesse relocates to Australia, because his father had liked the idea of it (simply because it was so far away) and never got there himself.

Dialogue is differentiated from the third-person narrative through italicisation, and is often delivered with impact at the end of a poem, such as when Jesse is first getting to know his love, Flannery:

Jesse gets his first guitar in 1962, when he is fourteen, and music will be a constant throughout the narrative. When Jesse firsts sees Flannery she has a ‘fiddle at her chin’ at a pub in a small Australian town. Flannery will be the love of his life.

We cannot be sure what will happen to Jesse, but we want to know. The rhythm of the words and the punchy last lines of each poem keep us turning the pages. We’ve witnessed Jesse’s childhood and we want to know how he will turn out, given the tension already created by his inherited habit of ‘moving on’. To our surprise, Jesse settles. But it is not just due to Flannery and their coming baby girl, Maille. A dynamic figure, Leon, enters their lives: ‘The man was a razor blade. / A struck match.’ He thrills Jesse ‘beyond desire’.

Leon is an intriguing character. We cannot understand his pull (and Kristin Henry only gives us a glimpse into Leon’s past, until more is revealed towards the end) but we understand that this pull exists, because the other characters are so drawn to him. And we understand that people like this exist, and that people will give up their lives for their ideals. Jesse and Flannery, and others, will follow Leon to a new (non-religious) community called Heartsong.