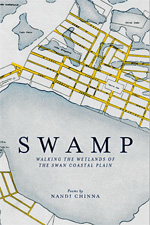 To introduce Nandi Chinna’s Swamp the reader is presented with the idea of poetic creation through walking. Chinna describes how ‘the legs move through time and space, marking the movement over grass, stones, hills, and through wind’ (8). Indeed many of her poems in this collection engage with just this sense of time, space, and movement as walking becomes a way for Chinna to trace the wetlands of the Swan Coastal Plain, those that have been lost, and those that are fragmentary. Significantly, it is often when acknowledging the relationship between movement and the fragmentary that Chinna’s poems are at their strongest. In ‘Herdsman Lake Walking Poet’ the poem begins with one stanza describing the poet growing up where ‘cockatoo’s black wings / swept light from the sky’ (a generalised depiction of time) and the second of peat burning ‘a cloud of ash shaped like a bird’ (a specific instance of a fire). This passage contains two fragmentary instances of bird life that the poem links through movement. It is noteworthy that even as the birds cross the fragments through motion, the affect is not homogenising. Rather, the sense of space and time is upheld as the reader is moved from one stanza and fragment to another in a way that creates a sense of connection but not a sense of unproblematic continuity.

The connection between fragment and movement is also clear when Chinna describes the Herdsman poet as stalking ‘the rhythm of a phrase, / walks the words’ which then become the way in which ‘the poems recite themselves into the iris of his eyes’. Here the poems are created through walking but also the fragments of Herdsman Lake, those that are specific (the fire) and those that are general (the memories of growing up). Further, the poems created from this movement are multiple, residing in the poet’s body as walking (rhythm) fragments (place) and poetry (craft). It is this multiplicity that Chinna foregrounds here as a specific poetic craft that does not elide difference, but also recognises the potential for connection.

Another strength is Chinna’s acknowledgement of the urban spaces that have now encroached upon the wetland system. ‘Drain’ depicts the creation of a new suburb where there are ‘sewer pipes not yet connected’. Again the idea of fragments and movement is significant as the persona climbs down:

Here bodies are differentiated by excretion, and these are washed down the drain. Indeed it is the flushing movement that brings these fluids in relation to each other. However, this is more complex than a simple shedding and then melding. Specifically, the movement is one of removal: flushing as contamination rather than celebration. In writing against this perception Chinna indicates the potential of this space, however it is finally a contingent on time, being a place that is yet to come into being. It is located in ‘all the nights of the future’ and ‘our whole lives poised above our heads.’ The use of ‘poised’ again suggests the possibility of this space, referring back to ‘cloacae maxima’, one of the first sewers in Ancient Rome used to drain swamps. Indeed the idea drain is given a double meaning here, as a way of getting rid of human waste, but also of draining what is seen as ‘wasteful’ in terms of land use (swamps) in order to make that land suitable for human habitation.

Chinna’s presentation of fragmentary movements in her poems can also be their downfall. In ‘Washing Lane’ these components serve to obscure power relationships that should not be so easily dismissed. The poem begins with an office worker taking a break ‘squinting into a mobile phone screen’ and while in the second section ‘a man in a glass-fronted office’ in ‘Money Street’ ‘leans into his computer screen’. However it is the third fragment that it problematic:

The fragmentation and movement in this poem, rather than eliciting a productive form of examination, instead renders the Indigenous people depicted in the poem in a stereotypical fragmentation as they ‘vanish’ into the ’emptiness’ of the landscape. The movement between the fragments do not create a sense of mutual connection or suggest a form of relation, but rather ignores the history of such damaging stereotypes and the impact they have.

Swamp takes the motion and snapshot from walking to explore the wetlands of the Swan Coastal Plain as a form of poetics. The strength of this perspective is its flexibility, allowing Chinna to depict various spaces and people, including urban wetlands. However, at times it also obscures the way stereotypes are also based on fragments and does not engage with this to the extent it could.

This entry was posted in BOOK REVIEWS and tagged Nandi Chinna, Rosalind McFarlane. Bookmark the permalink.
Rosalind McFarlane recently completed her doctorate in Asian Australian poetry and depictions of water at Monash University. Originally from Western Australia her work engages with ideas of place, collaboration, ecocriticism and representations of water. She has been published in various journals including Cordite, Antipodes, Axon and Colloquy.