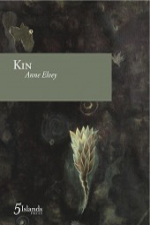 The kinship Elvey forges between her poems and ecological criticism lends both rigour and reverence to her first full-length collection of poetry. There is a radiant stasis at the core of her poems that encourages the reader to listen to the susurration of multiple, overlapping conversations to which Elvey is contributing.

Elvey is a significant voice in Australian ecological theology. Her research and poetry blog, Leaf Litter, charts a series of important papers and pertinent thoughts about the link between ‘teaching, research and writing as a response to ecological crisis’. The most recent feature of this blog is Elvey’s presentation from the Ecofaith conference in May 2014, entitled ‘On (not) speaking about God ecologically’. In this paper, she considers scholarship on the kinship model, most importantly, extending eco-theologian Denis Edwards’ work on ‘challenging the model of domination and exploitation’. Elvey’s Kin puts into practice Edwards’ suggestion that we ‘have much to learn about kin-ship from the traditional cultures of indigenous peoples.’ Her ‘Claimed by Country’ sequence addresses, in her own words, her responses as:

She references ‘this practice of attentiveness’ to Miriam Rose Ungunmerr Bau-mann and responds to the Aboriginal people’s practice of deep listening or ‘dadirri’. In ‘Claimed by Country 2’, Elvey contemplates the ways that she is not alone in place or time:

In this suite, Elvey puts faith in the relationality of being claimed. She applies a postcolonial ecocriticism in her poetic utterances as she moves ‘into, out of/country’, haunted by ‘settler shame’. Deborah Bird Rose has argued that ‘language is full of ghosts’1 and Elvey’s ‘Claimed By Country’ poems are haunted by the ethnographic voices she enables ‘on Nyoogah land’. The narrator considers adding her voice but she chooses silence, allowing Indigenous subjectivity to in-habit the space.

Silence is a motif made exquisitely self-conscious in many of Elvey’s poems; in this way, the narrator becomes witness to the events. At its heart, Elvey’s Kin encourages listening and reconnecting with the earth and its others. In the only prose poem in the collection, ‘Receiving a past’, the narrator is mute:

The juxtaposition of music and soundlessness is framed by the mirror; its shiny front resting on the soil, exposing its ‘reverse’. The chain of ants in the fourth line rings ‘a world’ between Dreamtime and Picnic at Hanging Rock. It is a stunning moment beyond language when, finally, ‘a/small face looks up, mute’.

Pages: 1 2
This entry was posted in BOOK REVIEWS and tagged Anne Elvey, Cassandra Atherton. Bookmark the permalink.
Cassandra Atherton was a Harvard Visiting Scholar in English in 2016. She has written seven books of prose poetry and is the current poetry editor of Westerly and is co-writing Prose Poetry: An Introduction for Princeton University Press.