John Hawke Reviews The Organ-Grinder’s Monkey: Culture After the Avant-Garde 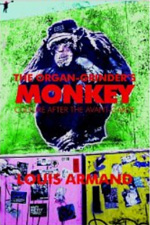 The Organ-Grinder’s Monkey: Culture After the Avant-Garde
by Louis Armand, Litteraria Pragensia Books, 2013

The dream of a compact between revolutionary politics and a poetics of radical experimentation has haunted the avant-garde since its inception in the wake of the failed European uprisings of 1848. Rimbaud’s activation by the events of the Paris Commune, and Mallarmé’s sympathies for the Bakuninite anarchists of his day, signal an alignment between Modernist aesthetics and extremist politics (of both Left and Right) that is central to debates within twentieth century literature. The politics of the Cubo-Futurist avant guerre movements were notoriously unstable, informed by a mélange of Nietzschean and Sorelian violence, an apotheosis achieved in the cataclysmic events of the Great War. The Cabaret Voltaire of 1915 provided a haven of protest from this death-smash – international, polyglot, trans-disciplinary, and clear in asserting the independence of its aesthetic aims: in Richard Huelsenbeck’s words, to reject ‘the idea of a nation which is at best a cartel of pelt merchants and profiteers in leather, at worst a cultural association of psychopaths who, like the Germans, marched off with a volume of Goethe in their knapsacks, to skewer Frenchmen and Russians on their bayonets’.1 Hugo Ball’s novel Tenderenda the Fantast describes his alchemical search for a purifying logos, influenced directly by Khlebnikov’s zaum experiments, which he hoped might restore this corrupted world.2

The ideals of protest and experimentation embodied in the artistic enclave of Zurich provide a kind of paradisal model for avant-garde practice, one which is only partially realised by similar collectives across subsequent decades. The promise of a new Renaissance that seemed possible with the direct social engagement of Russian Futurist poets and artists in the brief period following the October Revolution (Khlebnikov describes his ‘Tables of Destiny’ as ‘Marx squared’) was swiftly extirpated: Mayakovsky’s slogan, ‘A revolution in politics necessitates a revolution in form’, echoes down the century with the failure of its fulfilment. By 1931 the division between Socialist Realism and an ivory tower ‘Formalism’ (the chosen term of Zhdanovists) had come to define critical arguments exploring the relationship between politics and aesthetics – and this is the context in which Brecht’s assertion of a Shklovskian ‘alienation effect’, as well as key debates surrounding Benjamin and the Frankfurt School, are inevitably positioned from the 1930s onwards.3 This atmosphere almost certainly undermined André Breton’s attempts at praxis: the establishment of Surrealism in the Service of the Revolution resulted in the expulsion of many of the movement’s most artistically radical participants (Artaud, Soupault), and Breton himself refused to follow Aragon’s pathway as a card-carrying Stalinist. A possible alternative model is offered by Huelsenbeck himself, in the activities of Berlin Dada in the immediate postwar period: responding to the crisis at a time when socialist revolution seemed most likely, the Germans seemingly abandoned the realm of the aesthetic entirely for a program of confrontational performance activities, adopting the language of mass communications by placing advertisements for Dadaist banks (‘Invest your money in Dada!’) as hyper-inflation mounted. Something similar might be seen in the deliberately anti-aesthetic activities of the Situationists a few decades later: the key techniques of Guy Debord and his associates are those of détournement – a deliberate rejection of original artistic creation – and the corporeal and experiential performance of the dérive. This history shapes the renewed demand for rapprochement between revolutionary politics and radical aesthetics that emerged in the late-1960s and continued through the 1970s: one can follow this directly through the development of Jean-Luc Godard’s films over this period, which are increasingly supported with quotations from Mayakovsky, Brecht, and other key figures mentioned above, leading to his Huelsenbeck-like abandonment of the aesthetic in the activities of the Dziga Vertov Group (1968-1972).

It is suitable, therefore, that Godard is the subject of the opening essay in Louis Armand’s collection, the subtitle of which is ‘culture after the avant-garde’. The film he selects for discussion is Histoire(s) du Cinema (1988-1998), a monumental collage work which seems to owe some debt to Debord’s earlier film experiments, which predate and complement Godard’s more widely-distributed oeuvre. Armand rightly asserts Godard’s avant-garde credentials in delivering this late gesamtkunstwerk, likening it to Finnegans Wake for its radical defamiliarisation of conventional film syntax. But there is a paradox of positioning here: how to compare works from such obviously dissimilar historical periods as the early and late twentieth century? As Armand states in his key question from the title essay (included in a fascinating anthology on this subject by the same publisher)4: ‘Is an avant-garde viable under the conditions of postmodernity?’ The issue of dissemination is pertinent: whereas Joyce’s Work in Progress was internationally famous through periodical publications years before its actual delivery, Godard’s film has arrived only belatedly in the English-speaking world. The first full-length local screening at ACMI in Melbourne a few years ago was sparsely attended, and not many stayed to the end; the film has since gained some currency as a DVD release, but it’s still difficult to find someone with whom to have a conversation about it – in that respect at least, Armand’s essay is most welcome. This is indeed the case with each of the subjects selected for discussion here – which range from the art of Twombly and Basquiat, to Beckett’s Film and the cinema of Makavajev, to contemporary international poets such as Pierre Joris, Karen McCormack and Véronique Vassilou. Armand displays a formidable historical knowledge of both the poetics and practice surrounding the arguments outlined above, but, most admirably, his chief engagement is with work of his own time – yet the question of ‘viability’ remains.

One Response to John Hawke Reviews The Organ-Grinder’s Monkey: Culture After the Avant-Garde