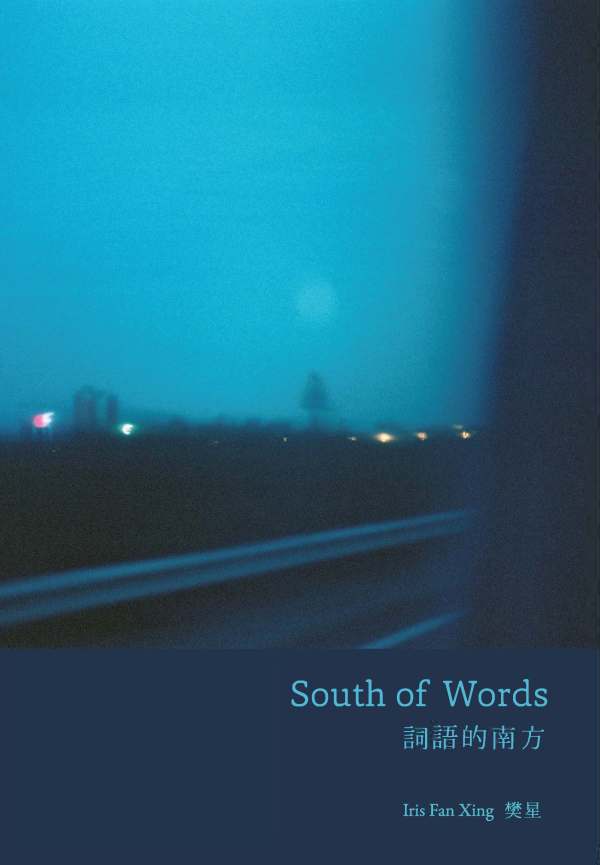 Christopher (Kit) Kelen has described Iris Fan Xing’s South of Words as ‘not translation’. The intersection between English and Chinese Mandarin lies at its heart, reflecting Fan’s converging identities across settings and cultures. Her publisher, Kelen identifies that readers’ engagement with bilingual poetry can be limited by our evaluation of translated works predominantly by their faithfulness to the assumed ‘original’ product, often regarding translation itself as necessarily an act of ‘watering down’. Fan has previously subverted this notion in her debut collection, Lost in the Afternoon (2009), which was intended instead as a conversation between parallel texts, capable of greater richness and imaginative value in tandem than as a standalone works.

South of Words operates in a similar manner; as a non-Chinese speaker, I am acutely aware that my reading of the collection is incomplete. Nonetheless, it is this prospect of her multilingual poetry that allows Fan to represent cross-cultural identity on its own, authentic terms, while offering a uniquely nuanced experience to readers, particularly those belonging to the author’s diasporic communities. In the same way, South of Words does not convey Fan’s relationship to Australian and Chinese cultures as discrete influences, but rather in their cultural synthesis.

The most overt representation of this occurs in the titular poem, which lies at the centre of the collection as a division between the English and Chinese sections. In ‘south of words’, the languages weave in and out, with English words in black text and Mandarin in white, together on a hazy, grayscale photograph. As the poem progresses, its background fades closer to black until the English words are almost fully obscured and the Chinese characters are starkly clear. This transitive quality serves to exemplify the collection’s emphasis on journeys, tenuously mapped out with direct and indirect references alike:

The dialogic relationship between English and Mandarin is echoed with Fan’s thoughtful paralleling of physical locations – not by means of seamless, perfect comparisons, but through the sincerity and occasional disjointedness of personal perspective. This can be seen in ‘smog’, where Perth and Macao share common ground within their respective opposites:

In this sense, the bleeding of cultures into one other allows Fan to subvert the notion of a perfect metaphor in favour of a perfectly subjective metaphor. Memories are conveyed in their esoteric honesty – closer to the odd, internal logic of a child trying to rationalise the world, than the platitudes of an adult attempting to neaten it. Fan’s metaphors feel uniquely authentic in their refusal to be overwrought—or sanitised in a social vacuum—for the sake of universal relatability. The result, however, is relatable in its affective significance as a reader. Speaking a truth that is equally personalised by direct confession and subtle contextualisation of Eastern and Western influences, contemporary and mythological figures, and multilingualism, Fan produces work that is layered with interpretative nuances, but can still be appreciated at different levels of depth. This allows for a diversity in readership of Chinese and non-Chinese speakers alike, and both casual and academic readers of poetry, without alienating those who lack specific contextual knowledge and may simply enjoy the thoughtful intrigue of Fan’s language choices.

South of Words demonstrates the subjective merit of its intertexts in their capacity to enrich traditional modes of evocation. The relationship between experiential and referential elements allows for an undiluted representation of the self that is not confined to the East or West either in physical location, nor language, nor self-identity. This is also depicted frankly in ‘love it or…’:

Not only does this poem portray an uninhibited self, but it intertwines the entities of place and person. ‘love it or…’ also emphasises the metapoetic urge to create one’s own rules and write in a manner of authenticity that is self-defined in expression. In ‘Canton holiday’, the wider implications of valuing subjectivity are also conveyed as a protest against detached, officialised views of history:

The poignant simplicity of these words is undercut by the power of their suggestion, simultaneous calling on the reader’s internal and societal awareness. South of Words ultimately feels like an exploratory journey of re-familiarising, where the self is as elusive and evolving as its physical settings, and histories are personalised within experience itself. In Fan’s poetics, while nothing is immune to change, nothing is quite devoid of familiarity either.

This entry was posted in BOOK REVIEWS and tagged Alex Creece, Iris Fan Xing. Bookmark the permalink.
Alex Creece is a writer, poet, collage artist, and average kook living on Wadawurrung land. Along with working as a Production Editor for Cordite Poetry Review, Alex is an Online Editor for Archer Magazine. Alex was awarded a Write-ability Fellowship in 2019 and a Wheeler Centre Hot Desk Fellowship in 2020. A sample of Alex's work was Highly Commended in the 2019 Next Chapter Scheme, and she was shortlisted for the Kat Muscat Fellowship in 2021. In 2022, a suite of Alex’s poems was shortlisted for the inaugural Born Writers Award.