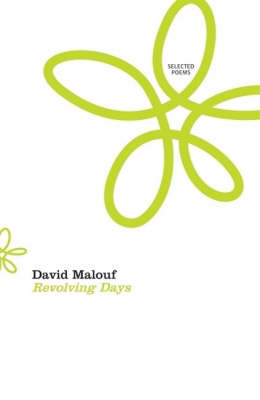 In the very appropriately titled Revolving Days, David Malouf has put together a selection of poems that addresses the past, place and its importance to self-definition, the memory of houses emptied of family and objects yet full of what's left behind and filling up the present. The poems exhibit a quality which, with political comments more subtle than Les Murray's and longings less romanticised than Robert Adamson's, declares that the places where the emotions taken from another world rendezvous are always present and clear in comprehending the discrepancy between place-and-mind and feeling-and-emotion.

In his author's note, Malouf states simply that this selection of poems for Revolving Days is about poetry and its relationship with time and memory. He gives a chronological explanation for dividing the selection as he has. Part I places him in his childhood Brisbane during and after WW2; Part II, in England and Europe in the 1960s; Part III, in Sydney in the 70s; Part IV, living between Sydney and Tuscany and settling in Sydney. But the selection appears to be more than that. What he has done in this book is to give us an interruptive-narrative that appears to be based on an order or chronology reflecting the daily, ordinary lives (‘the scent / of herbs, old clothes, suitcases'), as it were, of memories as a constant while interrupting that with sets of markers that are inconsistent with reality; namely, his use of motifs of ‘angels' and related paraphernalia (wings, saints, prayers, etc). His best attempt to describe the function of that motif in his work can be found in ‘An Essay on Angels – the short version':

Have never seen one but being
curious am always
on the lookout, as I was
in childhood for white horses.

Malouf's speaking (never without humour) to that contradictory attraction to the solidity of earth and the freedom of air is extraordinarily poignant. It seems to me, therefore, that in Part I he is writing about the discovery of where the reader of his earliest memories resides and their lineage. In Part II, he wants to show that he explores what happens when they (those earliest memories) leave home and visit you. In Part III, those memories have now begun to invite you into their home where you reminisce almost as a spectator. Part IV describes what is happening now and what occurs when memories try to claim territory that you (reading your earliest memories) consider their own. The reading and aerial poems continue to demonstrate the function of inconsistencies in reality in Part IV. Pay particular attention to ‘Reading a View' in that regard, where ‘Reading a view / is seeing where each thing points, irrespective / of the plane it's in, the arc on which it enters'. The continuing life of the work constantly remakes what's done, renewing it at every page in order for the earliest readings to guide the poet writing a life through detours and re-negotiations with time. In addition there is always a world-outside interrupting the reader threatening preferred readings, turning even the most familiar into driftwood, as in ‘Adrift':

Adrift in her Parker Knoll
rocking-chair, my mother
rocks this way and that
in this room and that room
of a stranger's house – the new
two-roomed flat she calls
her unit, never home.
A unit: but of what?
Where now is the whole?

Even so, there is no need to worry about every ‘yearning', ‘toothbrush', ‘daffodil bulb' or ‘cloud', Malouf might be saying. In every reader's panorama, there is always what you see and what has meaning. Not everything has meaning at the same time; neither is everything with meaning seen. Indeed, the consistent motif-sequences of angels and their related images (wings, prayer, etc.) attempt to tell us that the relationship between writings and readings is an exchange of the highest order. Even when Malouf's language is straight-forward, almost blunt, you are always required to read into it, as in ‘Early Discoveries' in Part I, ‘Decade's End' in Part II, ‘Out of Sight' in Part III, ‘A Place in Tuscany' in Part IV. And when it is elusive, he still manages to speak in a surprising and clear language, as in ‘Pieces of a Northern Winter' where ‘Fine scribble-lines of ice: the lake tenses / its skin, gives up / its wings'.

Polish philosopher Roman Ingarden wrote of the relationship between literary objects and real experience that we always regard represented objects and events from this present moment only, a here-and-now phase. Ingarden followed that idea to suggest, for example, that the events in a poem only take as long to happen for us as we take to read them, even though the poem might tell us that these events spanned several years, their ‘present' in this stanza, their ‘previous events' in the following stanza.

However, the events are said to span years and it would be unrealistic, I think, to expect that the reader's time in reading those words would also span years. It is more reasonable to consider that the words describing events that span years may occur for the reader as a brief memory does and last a few moments (while those moments observe a span of years). The text being read would only be acting as a record of the events much as an actual memory of them spanned a few moments and in no way contradicted that fact that the events being remembered spanned years. I live equally in both places or spheres of existence, that is, in my experiencing the events in actuality, in re-living them in memory or as if they were events in a poem and in the conversation we just had where we took turns reciting that poem. I feel it is that kind of experience to which Malouf is drawing our attention in the title poem ‘Revolving Days':

We never write. But sometimes, knotting my tie
at a mirror, one of those selves I had expected
steps into the room. In the next room you
are waiting (we have not yet taken back
the life we promised to pour into each other's mouths
forever and for ever) while I choose between
changes to surprise you.
Revolving days. My heart
In my mouth again, I'm writing this for you, wherever
you are, whoever is staring into your blue eyes. It is me,
I'm still here.

In other words, Malouf seems to be saying this to me. I find myself surrounded by things and events where I didn't participate in the existence or identification of those things or in the activities that made up those events when they first made themselves available to me. And yet I am brought into the actions that identify those things and comprise those events. Perhaps this is because conceptualising is not just a concept of the mind; that is, the conceptualising we attribute to the mind. From here on, every mechanism works in and out so that as a reader I am transformed in the most minute degrees as my memories of myself appear to be; the whole world, extending the me with themselves until all possible transformations are complete by will and imagination.

In Parts III and IV of Revolving Days the search for suitable methods to express that view seems equal in importance to the details meant to be remembered, whether or not in free verse and or through homage to other poets using their techniques or through translations. The reader's experience even at this level – of method and findings together – continues to take place beyond or behind that world-outside – war, ruin, weakness, physical human failings – so that the interrupted experience also helps to construct the reading; that is, its constructions as experiences within the reading act as our memories behave. Their constructions are defined within the places built by the reader's reading. They allow for conscious reading, for self-evaluation of the interpretation, creating new layers to the appraisal, sometimes remaining themselves; at other times, as on the same planes of the text so that the original experience seems to have acted with a freedom subject to the same rules under which the text has been accepted by the reader. This is, ultimately, the enjoyment of reading poetry and writing poetry. It is to this point that Malouf's angel-ness transports us, perhaps, to where, as he says in ‘Wild lemons': ‘our bodies were / expected at an occasion up ahead / that would not take place without us'. The language that places us, as we are now, in the same country with our memories is a communiqué with ourselves past.

This entry was posted in BOOK REVIEWS and tagged Bev Braune, David Malouf. Bookmark the permalink.