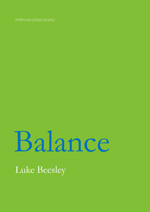 The poems in Luke Beesley’s Balance, like Siobhan Hodge’s work in Picking Up The Pieces, tend towards brevity (with a few exceptions). In Hodge’s case we might consider this quality in relation to fragments, where the body and the reader’s attention is cut-up. Reading Beesley, the encounter is one that is instead cut-off – that is to say that this is poetry attuned to the momentary and to the sensing body moving through the world.

The resonances of the collection’s title can be read a number of different ways in the poems. Balance is a physiological state, relating to cognitive and visual-perceptive functions. It is also something we think about in relation to the composition of artworks, the placement of colours and contrasts in light and shadow. Balance is relational, conditional and achieved with exacting poise and tension. These poems of cinematic detail have the effect of feeling both incidental and carefully composed, of being held together just enough, and the reader must take a risk in finding what it is that keeps the poem upright; ‘His ear lit up like a daffodil / He found four bees in the car’ (in ‘Short Story’).

Many of these poems developed from time Beesley spent in India as an Asialink recipient. While titles hint at specific locations these poems avoid the cliché of ‘exotic glimpses.’ Travel is a manner of being elsewhere and revelling in cultural, geographic and linguistic de-familiarisation. It recalibrates (rather than overloads) attention. The long, prose-like lines of ‘Burning Ghat’ opens ‘at the mouth of river’ watching ‘Men mostly going into the water and holding up like a chalice letting it dribble down their wrists. Eating the water.’ The final lines of the poem turn on the observer; ‘Tourists the word so viscous it was spit.’ Travel here must also be a critical mode.

Beesley’s images are startling and surreal. They suggest how an image can be an instance of interpretation and apprehension, an object not captured, but remade;

Colours appear frequently in Beesley’s lines and connect his poems to other modes of image-making, most obviously cinema and visual arts. Flashes of bright pink drinks and saris against tropical plant-life have the pop-palette of an Almodóvar film. We also think of colours in paint tubes, applied to the poems; ‘A good daub. People learning to paint with their feet. Painting a horse with a slash of white chalk on its head’ (in ‘Racehorse’). In ‘Entering the room’, Mark Rothko ‘rinses his hands in the shade’. Colour-field painting is a useful analogy for Beesley’s interest in colour as a material sensation, something which soaks and saturates.

Beesley’s invocations of colour are not straightforward; ‘The sun is green over the lawn. […] The sun is green over her chin. The green sun of night-time’ (in ‘Go’) and ‘I heard a green gate opening’ (in ‘Pieces of a City’). The application of colour-as-sensation is an exercise in abstraction – each recurrence of green mystifies, rather than concretizes what it is to experience the colour green. This idea has been explored by critic Sarah Riggs in relation to Wallace Stevens. Riggs suggests Stevens’ exploration of visual perception makes the fidelity of the eye into an ‘object of critique’ such that Stevens’ poems ‘negate the capacity of the eye to reference the world accurately’ by meta-corporalizing ‘the visual into a synesthetic harmony in which all sensory effects – sight, hearing, touch, taste, smell – are equally virtual, and received into the body as such.’ (Riggs 2002, 30) Such comments are highly applicable to Beesley’s work – perhaps his green suns find their earlier counterparts in Stevens’ ‘Arrival At the Waldorf’

The alliterative musicality of ‘Magnificent blue moved like a marlin’ in Beesley’s ‘Waking Up Delhi’ reads like pure Stevens. The possible resonances (which this short review only touches upon) between the two are philosophical as well as formal. Stevens’ poetry is often understood as phenomenological. Reading Balance in this light clarifies the work’s attention to the sensuous and sensory possibilities of vision as an attempt to enact a phenomenology of vision itself.

This entry was posted in BOOK REVIEWS and tagged Ella O'Keefe, luke beesley. Bookmark the permalink.
Ella O’Keefe is a poet and researcher living in Melbourne. Her poems have been published in Cordite, Steamer, Overland Blog and Text Journal. She is a former director of the Critical Animals research symposium. Her work on radio has been broadcast by The Night Air on Radio National, All the Best on FBI Radio and Final Draft on 2SER FM.