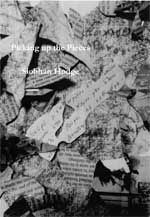 Picking Up the Pieces by Siobhan Hodge
Wide Range Chapbooks, 2012

Picking Up the Pieces is a compact debut of eight poems from West Australian poet Siobhan Hodge. Its publisher, Wide Range Chapbooks, is a Cambridge based small press run by John Kinsella. Wide Range publishes poets such as Redell Olson, Rob Mengham and Drew Milne mixed in alongside young and emerging local poets, many of them students like Hodge (who in 2012 undertook a research residency in Cambridge). The collegial spirit of Wide Range and the relatively modest production values – Hodge’s book comes stapled in a photocopied card cover – suggests a publishing model that favours immediacy and ease of circulation, in a town where poetry and thinking are a constant activity.

Scholarly occupation is pertinent to these poems, not only because of the book’s geographic context but because all the poems speak directly to Hodge’s research area: Sappho and constructions of feminine and feminist poetics. The presence of Sappho haunts this collection in numerous ways. ‘Apple’ uses sections of Sappho’s writing, ‘To Counter Fragment One’ is imagined as a direct address from the writer to Sappho while ‘A Token from Sappho to Phaon’ and ‘Sappho to Alcaeus’ considers speculative biographic details of Sappho’s life. Phaon was a mythological figure, a ferryman whose romantic rebuff of Sappho was said to have caused her to cast herself into the ocean. This is the event which Hodge’s partially poem imagines; “rising we travel / under waves […] lining up a fall / Aphrodite’s plunge” (‘A Token Sappho to Phaon’) This relationship, while not historically supported, has formed the subject of paintings and poems, most notably Ovid’s ‘Sappho to Phaon’ the fifteenth poem of his Heroides. Alcaeus of Mytilene, on the other hand was a real, historical figure, a poet and contemporary of Sappho. Hodge’s poem describes a Greek vase depicting the two poets;

The honey smile and violet hair are a reference to Alcaeus’ fragment 384 which describes Sappho while the ‘Sylvan historian’ is phrase plucked from Keats’ ‘Ode to Grecian Urn’. These citations show Hodge’s concern not just with Sappho but also with the other literary works that Sappho has inspired.

Hodge, in both her poems and research, is concerned with unsettling the figure of Sappho and calling into question the notion that her writing of feminine desire represents a passive or demure act. Desire in these poems is part of obsessive, even aggressive tendencies. Gambolling cherubs have been dispensed in favour of images of erotic attraction which are both violent and corporeal. Blood, flesh, meat and bones are significant images; ‘slips of gloss where rips/meat-deep are hushed/and sealed to strung-up bones’ (in ‘Parian Sappho’), ‘dripping the same bloody pigments’ (in ‘Picking up the Pieces’) and ‘broke-crescent bone speaks / another story bloody lungs’ (in ‘A Token from Sapho to Phaon’). As well as hinting at the worship and sacrifice of Greek antiquity, these visceral images remind us that ‘the heart’ in a love poem is still found in the body.

Eros is in turns menacing: ‘but my gaze will/swallow you whole’ (in ‘Apple’); ‘I weave/garlands from roses/for each girl’s neck/each wanting to please you’ (in ‘Worship’) and obsessive ‘Though I twist, you’ve clung to me/a mouldering fox fur, formaldehyde trailing/every turn.’ (in ‘To Counter Fragment One’). The dynamics of obsessive desire can be read across various dialectical pairings; the lover and beloved, the artist and her muse and the scholar and the object of research. Hodge’s scholarly pursuit of Sappho is as central to these poems as any of the objects of Sappho’s affection. The title poem uses a metaphor of dismemberment to align the body of the poet with the body of the text that has been, pulled apart and re-assembled

This poem, like many in the collection, works with a fractured lyricism that befits a student of Sappho. The disjunctive and paratactic possibilities of the fragment form are explored with poems assembled as cut-ups from various sources and multiple text being overlaid or juxtaposed within single poems. ‘Sappho in Sequence’ for example begins with regular three-line stanzas before shifting into a multi-channel text;

The text in the final section of the poem is justified at both sides so there is a winding ribbon of white space separating the two jagged columns of text. Text is pulled apart throughout Picking Up the Pieces, re-ordered and scattered, necessitating associative and multi-directional reading. Hodge’s free-verse lines retain a classical vocabulary of lyres, plectora and kalathos and there are some appealing merges of antique and contemporary; ‘Yoke your car,/goddess’ (in ‘To Counter Fragment One’). Often lines are short with interspersed with spaces and missing words. Such gaps posit composition practice that works with the productive possibility of absence – thus we come to understand Sappho as the generative absence around which these poems are built.

This entry was posted in BOOK REVIEWS and tagged Ella O'Keefe, Siobhan Hodge. Bookmark the permalink.
Ella O’Keefe is a poet and researcher living in Melbourne. Her poems have been published in Cordite, Steamer, Overland Blog and Text Journal. She is a former director of the Critical Animals research symposium. Her work on radio has been broadcast by The Night Air on Radio National, All the Best on FBI Radio and Final Draft on 2SER FM.