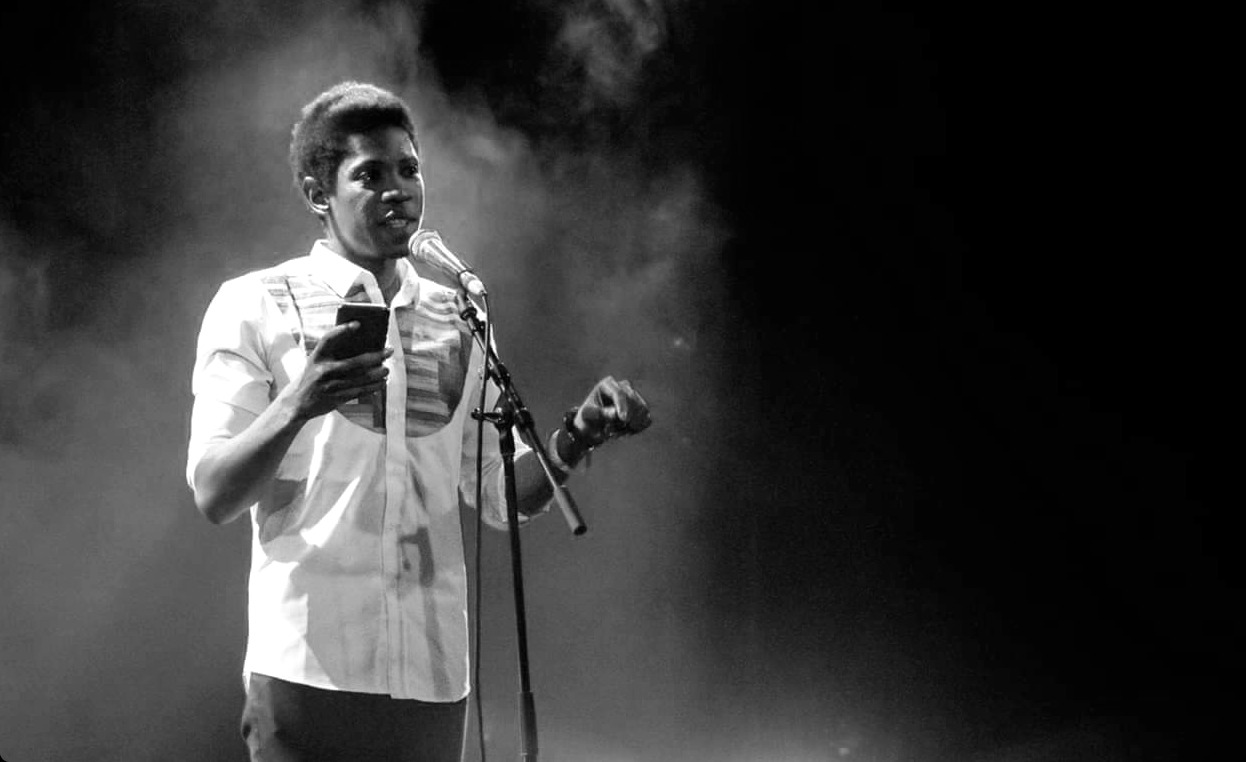 Thabani Tshuma is a Zimbabwean writer and performance poet. His work can be found in publications such as dichōtomi magazine and Next in Colour. Tshuma is also co-curator of Thin Red Lines, was a recipient a 2019 Hotdesk fellowship with the Wheeler Centre, and a featured author with Djed Press. Tshuma was Slamalamadingdong’s 2019 Grand Slam champion, ranked among the top 50 slam poets worldwide at the Individual World Poetry Slam (IWPS) 2019, and winner of the 2019 Melbourne Spoken Word Prize, People’s choice and Conveners’ choice awards. Writing is the aperture through which Tshuma views the world and experiences self in relation to others.

On a congested Google doc, somewhere on the internet in Narrm/Melbourne, I speak with Thabani in a reflective conversation about his ever-expanding practice of word work, and the experiences, connections and orientations that shape it.

Aïsha Trambas: Hey Thabani, we’re back in lockdown 5.0 [edit: 6.0, extended edition] right now as we kick off this exchange. Yikes! But also, maybe not? How are you doing today?

Thabani Tshuma: Today? Haha, time is such a peculiar concept! I feel like even in the brief gap between first receiving this and responding now, worlds have changed within me. And lockdown does that thing where all the days blend into one continuous barrage of uncertainty. Today, I’ve done things I needed to and things just because so that’s a victory by any measure.

AT: A huge victory!

I guess to begin with, I find it’s always important to acknowledge people who contribute to spaces of our growth and expression. There are so many Black African women, in particular, doing dedicated work in media, art and culture in this city. I’ve heard you mention that your entry into the poetry scene here in Narrm (Melbourne) was through the gorgeous portal of poetry nights at Afrohub, which was a space lovingly and intentionally founded and run by Saba Alemayoh and her team, and which I’m sure many people also miss dearly and feel a lot of gratitude for. Is it right that Afrohub was the first place you performed? Do you remember more about that first event you attended or performed at, what led you there, and how you felt in that space?

TT: So, so, so much love for Saba and the squad! Black African women have 100000% shaped, moved, shaken, and nurtured my entire artistic journey. I always feel like I’m going to forget to include someone when acknowledging folks, the list is long and in no way limited to: Tariro Mavondo, Bigoa Chuol, Soreti Kadir, Mariam Koslay, Zaynab Farrah, all of whom have changed my world for the better!

Yes, Afrohub was the first, almost seems like a lifetime ago (there’s that time thing again). And what a space it was! I’m still yet to find somewhere that can fully fill that void. I could probably give a total play-by-play of that entire night! I’d been aware of there being a spoken word scene in Narrm but was always unsure of how to find a point of entry, and not just a way in but a safe space for my words. The nature of poetry and I suppose all artforms is that they come with an inherent vulnerability in the idea of ‘self-expression’, it’s putting your truth out there and the reality is that not every space is capable of receiving you in your fullness especially at our intersections of identity. What I loved most about Afrohub was its blackness and how not just the other performers but also the audience, looked like me and gave reverence to my work through honest relating.

Pages: 1 2 3 4
This entry was posted in INTERVIEWS and tagged Aisha Trambas, Ayan Shirwa, Georgia Kartas, Thabani Tshuma. Bookmark the permalink.
Aïsha Trambas is an Afro-Greek arts worker based on Wurundjeri and Boonwurrung lands. Trambas was the Program Coordinator of the Emerging Writers’ Festival 2019, and has performed at Yirramboi Festival, Still Nomads’ ‘Displace and Displant’ at Arts House, Melbourne Writers’ Festival and Melbourne Fringe. She is interested in becoming more herself, and figuring out what she’s meant to be doing here.


More by Aïsha Trambas on Cordite Poetry Review →
Thabani Tshuma is a Zimbabwean writer and performance poet. His work can be found in publications such as dichōtomi magazine and Next in Colour. Co-curator of Thin Red Lines, a 2019 Hotdesk fellowship recipient with the Wheeler Centre, featured author with Djed Press, Slamalamadingdong’s 2019 Grand Slam champion, ranked among the top 50 slam poets worldwide at IWPS 2019, and winner of all major awards at the 2019 Melbourne Spoken Word Prize. Writing is the aperture through which he views the world and experiences self in relation to others.