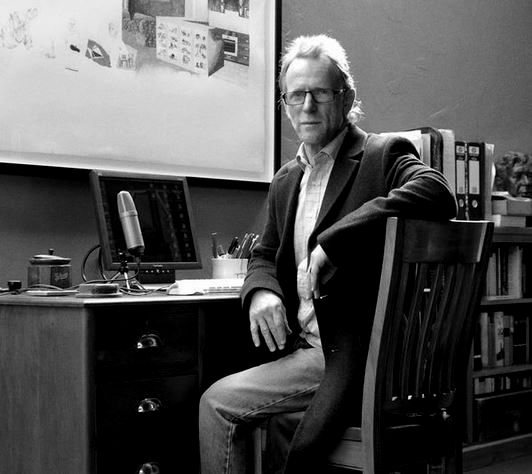 After serving as a pyrotechnics supervisor for acts such as Metallica and Janet Jackson, New Zealand poet David Howard retired to Purakanui in order to write. His collaboration with photographer Fiona Pardington, How To Occupy Our Selves, was published in 2003. The Harrier Suite appeared in both Best New Zealand Poems 2004 and The Word Went Round (2006). In 2007 David worked with Brina Jez-Brezavscek on a sound installation, The Flax Heckler, in northern Slovenia. On 18 September 2009 soprano Judith Dodsworth premiered Johanna Selleck's setting of his lyric Air, Water, Earth Meld at Melba Hall in Melbourne, and in December 2009 [after giving this interview] he received the inaugural NZSA Mid-Career Writer's Award. His poetry has been translated into German, Italian, Slovene and Spanish.

Tim Jones: I hope I’m not being unfair when I say that your profile as a poet is comparatively low within New Zealand, despite your impressive track record. On the other hand, you have worked extensively with overseas artists. Is the international aspect of your collaborative work a matter of choice, necessity, or a little of both?

DH: Profile is determined by third parties who are immovable objects before the irresistible force of authorial ego:  «Ho, ho, I am The Toad, the handsome, the popular, the successful Toad! » To get a reputation you need to behave as if you already have one. But I prefer pyrotechnics to talking about words, which are best left to their own wicked devices. My modest profile reflects my immodest choices – although choice is, as you suggest, the acceptance of necessity. Maurice Duggan was right: 'If one sort of life becomes, in some aspects, impossible then another must be devised.' I can't regret working with the All Blacks or touring with Metallica, so I can't regret the invitations that never came to present my poems, nor can I deny that I'd have enjoyed such invitations. There's no conspiratorial mystery here. Despite my physical absence, I've enjoyed ten fifteen twenty years of respectful reviewing. It began with Kendrick Smithyman:

… a sense of shock, an uncommon astonishment at the extraordinary poise which is part and parcel of these usually quite short pieces. They are admirably judged, they last long enough to get their various effects but not longer. A certain authority matched with an appreciable intelligence, a body of information used with taste guides the reader into puzzling and on to delight, under government and restraint.
(Auckland Sunday Star, 30 June 1991)

And, despite the febrile silence of my immediate peers, it continues with the younger generation of Richard Reeve, Anna Livesey, Emma Neale and Kapka Kassabova:

David Howard is a mystery figure on our poetic landscape. Sparse in his output, virtually invisible to the media and involved for the last few years in staging entertainment shows around the world as a pyrotechnician, he belongs to an endangered species: the truly independent artist who remains quietly active throughout the yearsâ¦ In poems like ‘Care of the Commanding Officer', ‘Cain', ‘On the Eighth Day', ‘Dove', ‘To Cavafy', to name but a few, the cerebral blends with the visceral with a brilliant lightness of touch.
(New Zealand Listener, 2-8 Feb 2002)

It's valorizing spin to quote Hofmannsthal, ‘Die andern wollten mich daheim zu ihrem Spiel,/ Mich aber freut es so, fur mich allein zu sein.' (‘The others wanted me to join them in their games,/ But to roam freely and alone is what I like.') Like everyone else, I need to work and play with people who are interested in what I do. After all, the faithless man discards himself.

Having worked with artists (Paul Swadel, Mark McEntyre, Jason Greig, Minna Sora, Eion Stevens, Fiona Pardington, Kim Pieters, Garry Currin and Len Castle) I wanted a more compressed process so my interest shifted to composers. Who? Anthony Ritchie has creditably set poets but I don't like his music. I'd like to like it however, as philosopher Alan Musgrave points out, we don't choose our likes or dislikes nor do we choose our beliefs. Like attracts like and, happily, unlike. So far I've worked with three composers: Marta Jirackova of the Czech Republic, Brina Jez-Brezavscek of Slovenia, and Johanna Selleck of Australia. I'm hopeful there will be others.

When most of my contemporaries (and potential listeners) are rocking backwards and forwards to variants of popular song, why am I attracted to the art song, oratorio and songspiel? The latest hit song gives us the liberty to be superficially involved but still enjoy; it is the artistic corollary of casual sex. A contemporary classical piece demands commitment before it surrenders its charms.

Karlheinz Stockhausen, speaking about Stimmung, asserted: 'One listens to the inner self of the sound, the inner self of the harmonic spectrum, the inner self of a vowel, the inner self.' I hear that as a Kantian challenge to respect the autonomy of whatever and whoever. To write poetry is to write music; to set poetry to music is to render the cause an effect. Every note questions the text it supports. Each of my collaborators has the modesty of one who understands ‘the fascination of what's difficult' (Yeats). They care more for the material than for attention – otherwise why set a poet from New Zealand? Marta's answer: ‘I see that it is a country of miracles.‘

TJ: Reading Richard Reeve's 2001 interview with you in Glottis 6, I got a strong impression that you are largely out of sympathy with the current state of poetic practice in New Zealand – both with much of the poetry being produced by individual poets, and with the infrastructure by which poetry is published, reviewed, and brought to the attention of its potential audience. Is that fair comment, and have your views changed since 2001?

DH: As the view has got darker (it must have, look at all those stars!) so have my views. But I've been lucky enough not to wake up a curmudgeon who is bruised by youthful failure. I still smile at the horizon as I sip coffee that is stronger than my attraction to the NASDAQ. When I arrive at my desk I find the draft of a literary quiz; it begins 'Which top or leading New Zealand poet is the subject of these lines?'

You're wrong, it's not Bill Manhire. But your inference makes my point. I hear you clear your throat. Of course the question was unfair – a low blow intended to double up the reader, albeit with laughter. That excerpt is from The Narcissiad (Cedar Rock Press, 1981) by the American satirist R.S. Gwynn so the situation described is typical rather than particular. Typical of what? An institutionalized poetry scene such as has developed here over the last three decades.

When Richard Reeve asked I responded with something so obvious that no one was saying it out loud. The first responsibility of an institution is to export its values, its valuations, in order to extend its longevity and therefore make more money. The imperative is economic rather than poetic. This means that statements by the representatives of institutions should be viewed as propaganda regardless of their truth quotient. In other words, whether the statements are true or not, their primary purpose is to impress rather than inform. The International Institute of Modern Letters (IIML) is infamous for referring to itself as famous; the frequency of repetition is Orwellian yet commercially irreproachable.

Institutional or not, we do seem desperate to puff up our chests and strut like roosters across a painfully small backyard. It's not enough to hum I Wanna Be Adored by the Stone Roses. When Andrew Johnston asserts that Manhire is ‘our best poet' then I hear Johnston's ambition rather than Manhire's achievement, which is brilliantly derivative and reaches beyond American models to Old English wisdom poetry and Norse sagas. Allen Curnow's polished poems appear to have been written primarily so they (and their author) could be admired, while James K. Baxter insists on repeating stage directions out loud. Karl Stead, institution and iconoclast in one, is the world authority on C.K. Stead; we learn this by reading any recent essay by him irrespective of its stated topic. In an age when reviewers crib press releases, assertion of will is a determinant of reputation (it was Dan Davin who mentioned 'the plasticine of truth') but evangelical self-regard is rather different to the verdict(s) of history.

Look back a century – what most people believed then is not what their descendents believe now. Future generations will have a plurality of responses to today's poetry, responses that will negotiate the leverage of today's institutions and discard authorial special pleading. Who knows what will settle where and for how long? Our superior collections have had mixed fates: Michele Leggott's Dia deservedly won the New Zealand Book Award for Poetry, whereas Graham Lindsay's stringent The Subject was sidelined. Both books were published by Auckland University Press in 1994 so imprint, release date, publicity and distribution were identical and therefore neutral factors. Admittedly, as a Christchurch resident, Lindsay was disadvantaged – and this despite the presence of literary historian Mark Williams who, like a colonial functionary, looked to the main chance of Wellington.

Tim, since you speak Russian, here's an instance where the main chance was a missed chance. This example avoids the prickly pear of reputation; instead it squeezes the lemon of ignorance. Had Williams put down Sport long enough to browse the Christchurch journal Takahe, which I co-founded in 1989, then he could have read the editorial of Takahe 3 (Autumn 1990) by Tatyana Shcherbina and R.V. Smirnow. The New Zealand Project, an open letter sponsored by 42 Russian signatories, called for an autonomous laboratory of new artists, gamely asserting:

The geographical place where this autonomous laboratory will meet the new age, and perhaps be realised in its integrity, we call New Zealand. This is a land out of fairy-tales, belonging to the Queen of Great Britain and to God in equal measure, islands at the  «end of the world » which, compared with the rest of the world, are governed with more ecological sensitivity, which have preserved a culture and a political purity that quite miraculously turn out to be parallel, new and independent in relation to the rest of the world. So it is to this country that we would like to present our computer-bucolic project of a community of free people.

Pages: 1 2 3
This entry was posted in INTERVIEWS and tagged david howard, Tim Jones. Bookmark the permalink.
Tim Jones is a poet and author of both literary fiction and science fiction. He lives in Wellington, New Zealand. His fiction and poetry has been published in New Zealand, the USA, the UK, Australia, Canada, Vietnam and Germany. His most recent books are the short story collection Transported (Vintage,2008), the poetry collection All Blacks' Kitchen Gardens (HeadworX, 2007), and the fantasy novel Anarya's Secret (RedBrick, 2007). He was also the co-editor, with Mark Pirie, of the anthology Voyagers: Science Fiction Poetry from New Zealand (Interactive Press, 2009).


More by Tim Jones on Cordite Poetry Review →
Born in Christchurch, David Howard co-founded Takahē magazine (1989) and the Canterbury Poets Collective (1990). In November 2011, Cold Hub Press published David's collected works as The Incomplete Poems. In September 2012, his collaboration with printmaker Peter Ransom, you look so pretty when you're unfaithful to me, appeared from Holloway Press, the same month Otago University announced his appointment as the Robert Burns Fellow 2013. David is the editor of A Place To Go On From: the Collected Poems of Iain Lonie (Otago University Press, forthcoming).