‘We mirror what we see’: Holly Childs Interviews Cristine Brache

I’ve also recently written a poem where playing cards acted as a thread for meaning. It isn’t really related to the themes of the show or ‘Self-portrait without bed’ but the imagery had been floating around in my head for some months:

HC: You’ve mentioned to me that you are moving away from self-portraiture. I think a lot about the ways you incorporate images of yourself: variously captured while you sleep, partially masked or obscured, as photographs of photographs, grainy videos and your body depicted without face. Partial revelations of self, which present more questions than answers. How did you come to work with yourself directly as your subject? Have you always used images of yourself in your work?

CB: It took me a while to use my own image in the way I have been lately. Before, I tried to research other people’s stories and made work about that. I now realise I was always talking about myself, seeing or projecting my experience onto other ones. It feels safer and more honest to speak from my own position and not hide behind anyone else’s. Making and writing is always an attempt to get closer to myself whether I realise it at the time or not.

It has been evinced throughout history that women who use their image in their work are threatening to the patriarchy. Men have done self-portraiture forever and have been constantly trying to erase us in the process. They do that by shaming our image into darkness. Last night my husband, Brad Phillips, and I were talking about women’s magazines like Cosmo or Women’s Health Magazine and he referred to them all as ‘Women’s Shame Magazine.’ I agree with him completely. It’s very triggering for me to see these sorts of magazines in grocery checkout lanes because they grind at our image and tell us that we’re not good enough but here are ten new ways that might change that. I also hate that the term ‘selfie-art’ exists, it’s so infantilising and belittling. While I definitely don’t identify as a ‘selfie-artist’, and don’t really like most of its aesthetics, I respect it as a genuine form of self-portraiture. I know that if men were the ones who began to take selfies as a form of art the term would probably never exist. They would never be called narcissists or have to justify their use of their body or being. It would just be considered self-portraiture.

HC: Can you please expand a bit more on how you relate to power and play within both your visual and written artforms?

CB: My position in the world in relation to power results from a systemic default that’s not in my favour. So it kind of naturally emerges in my work since I feel and see it everywhere. It sucks but I try to maintain a certain amount of playfulness when addressing it by contrasting titles and context. For instance, I made this dog bowl with my name on it out of parian ware (‘Beware of Dog,’ 2016). 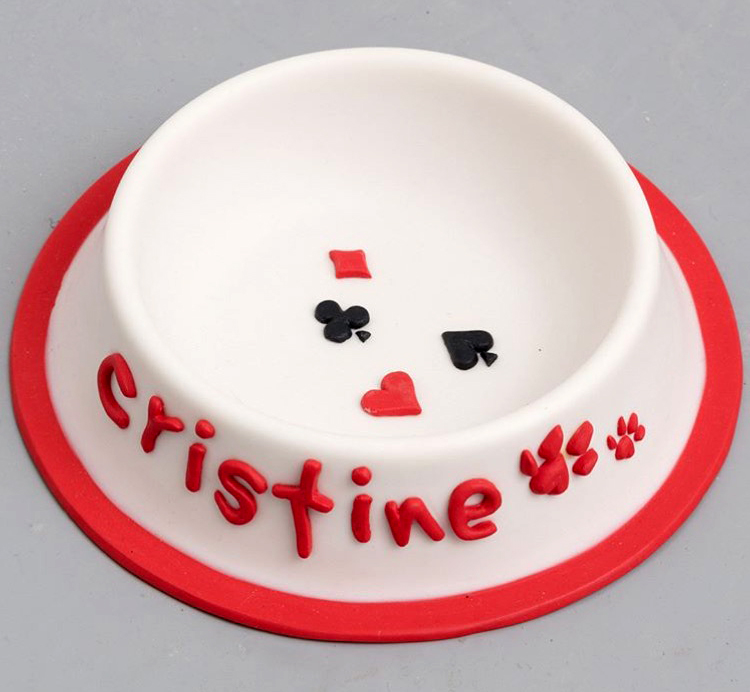 This is one of my favorite works, it’s so funny to me because it’s such a humiliating gesture, so humiliating that I think very few people would find it funny, which, is exactly why I find it funny.

HC: Through prolonged contact with your work, I start to feel like the power structures I’m subject to and trapped by out in the world are porous. I wonder if you are creating counter-power-structures that invalidate dominant cultural power structures … like taking control of not being in control?

CB: Sometimes I invalidate it, because it invalidates me. However, I think it’s important to include a validation of power structures within my framework – be it through poetry or art making – because patriarchy exists. If I don’t validate it, I’m not taking my own experience into account. Submissive and dominant positions in society necessarily need to co-exist to maintain the dynamic – not to say I want them to. I choose to speak from a submissive position because it’s more relatable and enables me to imagine what power from that position might look like.

HC: Who do you see as your artistic peers?

HC: I feel like you have ‘contemporary art’ followers, and that your work also appeals to internet fetish communities. I’m thinking of how on Flickr the choice of a keyword – applied by a community member as opposed to the photographer – or the placement of an image in a set alongside other images can completely alter its meaning. I get the sense that when you refer to ‘People I follow on Instagram who don’t follow me back,’ that you are probably not talking about people you ‘know’ outside of the context of Instagram or the internet in any way … but people whose work expands the possibility of what your work can do.

Pages: 1 2 3 4
This entry was posted in INTERVIEWS and tagged Cristine Brache, Holly Childs, Trinh T Minh-Ha. Bookmark the permalink.
Holly Childs is an artist based in Naarm (Melbourne) and Kaurna Yerta (Adelaide). Their work, across fiction, poetry, visual art and performance focuses on the shifting mechanisms of storytelling in a contemporary world in which physical matter is constantly being reshaped, recontextualised, and rewritten by emerging technologies and planetary crises.


More by Holly Childs on Cordite Poetry Review →
Cristine Brache is an artist and poet. Her work has been exhibited and published internationally in various institutions, galleries and publications. Her first book of poems, published by Codette and Furrawn Press, debuts autumn 2018.