Notes from Chennai: Rigour and Flow in Urban India 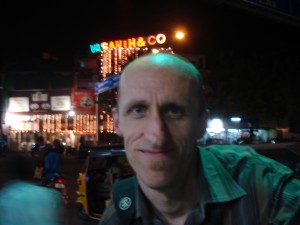 I am so pleased to introduce Melbourne poet Andy Jackson, who is kicking off our new monthly blog series that explores ideas of poetry and place, both domestic and abroad. In late 2011, Andy undertook an Asialink-supported residency to India. Here’s an insight into his experiences there – Emily

There are two extremes when it comes to writing. Some people sit at the keyboard early in the morning, stick themselves down with ‘bum glue’ (as Bryce Courtenay has memorably recommended), tap away and achieve their targets. Others basically just go with the moment; working at their day job, doing the housework and the gardening, but always carrying around a notepad just in case the muse floats softly down upon their shoulder to deliver a poem in its final form. At various times in my life, I’ve really wanted one or the other to be true. I’m now convinced (surprise, surprise) that the truth is actually somewhere else entirely.

Late last year, I spent about eleven weeks in India, mostly in Chennai, on an Asialink-supported residency. The task I’d given myself was to write about ‘medical tourism’, people travelling to another country for medical treatment, and the cross-cultural implications of this. There has been an immense amount of academic writing on the subject from public health and economic perspectives, but little in terms of personal stories. Since poetry to me is the preeminently intimate genre of writing (which also carries powerful public and political dimensions), and since my own poetry has long been interested in re-humanising interactions that occur around our bodies, I was keen to see what I could come up with.

Results? Well, I wrote about ten times what I normally write at home. And this was not because I sat down and worked at it regardless of my mood (although being away from home responsibilities meant I had more time to think and write). Nor was it because India is just inherently more inspiring than other places. Being outside your familiar territory does throw a whole lot of questions in your lap, and India’s especially adept at doing this. But while place is important to poetry, there’s more to it than that. Here’s where rigour dovetails into flow.

I arrived in Chennai aware that my main reason for being there was to write, and I had the weight of months of research pressing on my mind. Hospitals, clinics, disability, illness, tourism; all seemed to leap out of the background. I wrote a lot because I was prepared to write a lot, and I looked at things through the lens of my research.

At first the poems I wrote were tense, dislocated and searching for answers. Even though I’d been to India before, the sheer speed, density and sensory overload of the place was still shocking. As a visitor, your eyes, ears and nose tend to dominate your perception of a place – sensory superficiality and self-consciousness is pretty much inevitable. And inevitably, I became the alienated ‘medical tourist’.

Being an Australian in India, I found I couldn’t write dispassionately, at a distance. I kept becoming implicated. I had a lot of qualms about exhuming old cliches about this country and dressing them up in a contemporary issue – discrepancies in access to healthcare, poverty, pollution, crumbling infrastructure, etc – especially as an outsider. I was tremblingly wary about treating India as the Other, or as monolithic. After much time, talking and thinking, I came to believe that the key is that there is no key – just an ongoing questioning, as well as a continual letting go of the clenched preciousness of the First World-er.

As time went on, I became more familiar with Mylapore, the suburb of Chennai where I stayed. I met students, writers, people from various walks of life; I grew to feel deep affection for the place. I was seeing a different city. The longer I was there, the more my poems became about being present, noticing things as they were without a sense of panic or confusion, but with some kind of acceptance; exploring affinities while acknowledging the gaps.

And by acceptance I don’t mean the disappearance of a sense of injustice. A huge number of Indian people are sad, angry and protesting about government inaction on health, infrastructure and poverty, about corruption, caste-related oppression and misogyny. They feel these things on a much deeper level than I ever could. So, I hope I don’t ever lose touch with my intuitive human reactions, and I hope they come through in the final drafts of these poems.

This entry was posted in GUNCOTTON and tagged Andy Jackson. Bookmark the permalink.
Andy Jackson is a poet and creative writing teacher, and was awarded the inaugural Writing the Future of Health Fellowship. He has been shortlisted for the Kenneth Slessor Prize for Poetry, the John Bray Poetry Award and the Victorian Premier's Prize for Poetry. Andy has co-edited disability-themed issues of Southerly and Australian Poetry Journal, and his latest poetry collection is Human Looking, which won the 2022 ALS Gold Medal.