Words Wrought in the Rockies 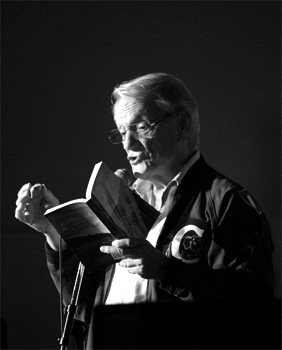 This week, Canadian poet Caitlynn Cummings, editor of the Calgary-based journal filling Station, gives us the lowdown on the recent Canmore artsPeak festival, which took place in the Canadian Rockies in June.

Sitting on my couch one afternoon I received a phone call, to this effect: ‘Caitlynn Cummings, would you like to take your artsPeak involvement to the next level? This is an exciting opportunity.’ At first I wondered if this was one of those you’ve-won-a-cruise calls that begins with a booming horn blast: WEEEEEEEOOOOOH, This is your Captain speaking … To my relief it wasn’t an automated call but a friendly ring from poet-around-town David Eso. I had indeed signed up to read a few short stories at artsPeak, a multidisciplinary arts festival held annually in Canmore, a picturesque town nestled in the Rocky Mountains, about an hour west of Calgary, Alberta, Canada. Dave asked if I’d like to participate as a writer-in-residence, spending a week among the peaks and the poets. He said I would workshop with a Canadian Parliamentary Poet Laureate and an experimental Saskatchewan-Australian poet, participate in the Migratory Words writers circle, and read twice at the festival. I said yes.

The veteran Canadian writer was George Bowering, the innovative expat Matthew Hall; we all met Dave at a restaurant in the heart of Canmore. Between scratching out grammatical mistakes on the menu, George regaled us with anecdotes. I, unaccustomed to literary celebrity, quietly digested name drops like Peggy — does he mean Margaret Atwood? — and his buddy Fred —Wah?! 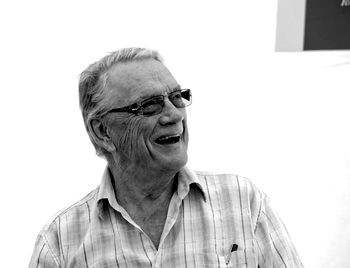 That evening we joined Migratory Words, Dave’s writers circle, and shared snippets of our work along with 13 local writers. Highlights included controversy over a young man inhabiting the voice of a pregnant woman, a visceral treatment of violence in Catholic orphanages, and plot discrepancies in Hamlet. Matt, Dave, George, and I had a longer, more intimate workshop session a few days later. In it I shared the first few pages of a play I’d been working on about an Albertan trucker. Excitingly, George found the voice believable, and Dave laughed at my crude jokes. Matt was noticeably quiet, and I wondered if my writing was a bit too uncouth for his erudite sensibilities. In truth I was just diffident after having read his dense and difficult radical pastoral poem days before. Gordian the text was, but painfully beautiful as well. 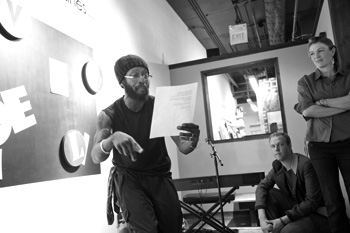 Once the festival proper began, we attended event after event. Dave co-curated a collaborative literary/visual art exhibition entitled Transmissions Between the Lines, which involved literary heavyweights like Aritha van Herk, Fred Stenson, and spoken word artist Wakefield Brewster, who arguably delivered the most dynamic performance. A particularly crowd-pleasing moment from his poem ‘H20’ was ‘Den a rumour went about dat I just could not believe / I spelled Evian backwards and found I was naïve.’

On the festival grounds, the artWord tent ran readings, open mics, and workshops all day. 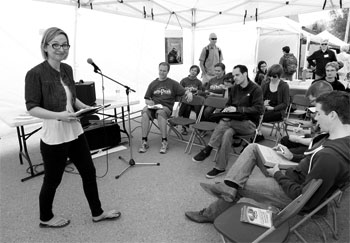 I offered a flash fiction piece entitled ‘Cream’ and a writing exercise wherein I coaxed participants to write ridiculous characters under the guise of ‘not writing yourself.’ These standout authors prevailed over me, however, and presented amazingly well-written vignettes. For instance, Erin Dingle crafted a poignant portrait (in four minutes flat) of an Inuit woman of one hundred years, shearing her village’s hair with expert hands, but dreaming of pointing her withered toes into ballet slippers. 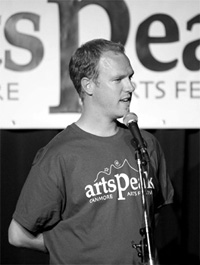 The artWord tent bustled all day. Matt gave us an intense reading from his long poem, Royal Jelly, complete with Maori-like roaring; Delaine Moore charted the journey of her memoir The Secret Sex Life of a Single Mom; Peter Learn initiated us in swimming with beavers with an excerpt from Someone Else; George Bowering read from his early, GG-winning poetry collection Rocky Mountain Foot; Lynn Martel donned a helmet and went spelunking; local author and Geist Emerging Writer of the Month Tim Murphy read ‘Shakespeare Rogers’; and Dave led a workshop on the sestina. 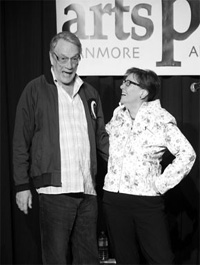 George Bowering with Aritha van Herk (one of his ‘literary babes’ — his words, not mine). | image by Pam Doyle

The festival ended with the Literary Saloon, where Dave read and introduced Aritha van Herk, who read a wonderfully sensory piece about waitressing, and introduced comrade George Bowering, who closed the show with an aptly Western excerpt from his novel Caprice.

Not just alliterative, but a hotbed of literary talent.

This entry was posted in ESSAYS and tagged Caitlynn Cummings, George Bowering, Matt Hall. Bookmark the permalink.
Caitlynn Cummings has an MSc in Creative Writing from the University of Edinburgh and writes poetry, fiction, nonfiction, and drama. She is also the Managing Editor of the literary magazine filling Station and the Coordinator of the Calgary Distinguished Writers Program. Her work can be found in This Magazine, Alberta Views, dead (g)end(er), Cordite Poetry Review, ditch, and NōD. Follow her on Twitter @Tartaned_Maple.