Notes from Narrogin and the Great Southern

I’ve led a spoiled existence over the past few decades when it comes to living in communities with thriving programs of literary activities and writers’ festivals: firstly Perth, then Albany and Geraldton. My move last year to Narrogin has found me in much quieter environs. I’m enjoying exploring my new neighbourhood. After decades living on the coast, the landscape of the wheatbelt is slowly working its way into my poems.

My new home is not without literary connections. We are 30 minutes from Wickepin, a town proud of its association with Dorothy Hewett and Albert Facey.

Narrogin is small (pop. approx. 5,000) and is the regional centre for a district where the emphasis is on farming and associated industries. The town is feeling the effects of the rural downturn. The last video store is about to go the way of the bookshop and the drive-in, but the locals are friendly, helpful, welcoming. Life is pretty subdued most of the time, but the town has a small, but very busy regional library that is at the heart of the community’s cultural life. In terms of literary-type activities, the library hosts visiting writers for talks and workshops, conducts book launches, children’s book week activities and hosts a writers group which meets monthly. In addition, ARTS Narrogin – the public face of the Narrogin Arts Council – promotes and develops the Arts in the district.

A bi-monthly Poet’s Café started last year in response to community consultations which uncovered a desire for a café culture in Narrogin. The Poets’ Café, where I emcee and perform, is sponsored by the Arts Narrogin and the Library, and hosted by Just Jesse’s Cafe. In order to encourage the reading, writing and performing of poetry, the Library invited Perth poet and actor Vivienne Glance down earlier this year and she presented a very successful workshop (thanks to funding from WritingWA). Performers of their own work at the Poets’ Café are short on the ground, but we all have a good time. Audience members happily perform their favourite classic and contemporary poems, and we sometimes include short writing activities. I place particular emphasis on promoting Australian poets and their work. 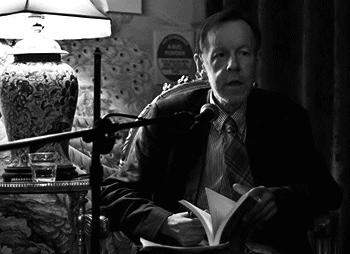 I commute frequently to Albany for writing events there. I’m a member of a writers’ group that’s been working together now for over ten years and I try to make as many meetings as I can. Albany’s writing scene is an active one, supported by a very engaged community of writers and readers, the Albany Public Library, local bookshops, and by Bookmark. Bookmark, a project of Creative Albany, is about bringing reading and writing activities to the Great Southern region. In February this year Bookmark, in collaboration with the Perth International Arts Festival, presented the Write in the Great Southern festival, which tag-teamed with the Perth Writers Festival and featured – amongst other visiting writers – the Irish poet Dennis O’Driscoll. I had the opportunity to show Dennis some of the sights of Albany, and later we both enjoyed an animated “In conversation” with poet Graham Kershaw as part of the WIGS festival program. 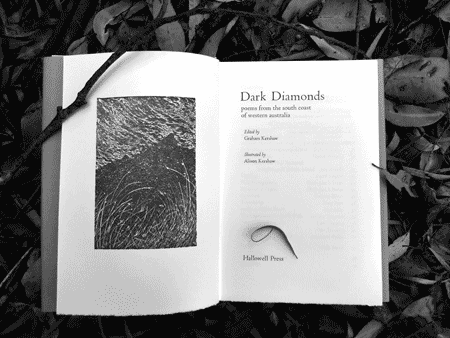 Denmark, WA-based Graham Kershaw (Hallowell Press) has been working for some time now on the production of the poetry anthology: Dark Diamonds: poems from the south coast of Western Australia. Dark Diamonds has been printed on a treadle platen press – an Arab, designed in the 1870s – using traditional letterpress techniques, with Centaur metal type imported from a foundry still operating in California. The books are hand-bound, as cloth-lined hardbacks. Alison Kershaw’s illustrations are copper relief etchings printed on the Arab. Dark Diamonds will be launched at 3pm on Saturday, August 25th, at the Butter Factory Studios, 8/12 Mt Shadforth Road, Denmark.

This entry was posted in ESSAYS and tagged Barbara Temperton, Dennis O’Driscoll, Graham Kershaw. Bookmark the permalink.
Barbara Temperton is a Western Australian writer. Her poems, short stories, reviews and articles have appeared in journals, newspapers and anthologies, and have been broadcast on radio. Her first collection of poetry The Snow Queen Takes Lunch in the Station Café appeared in Shorelines (Fremantle Arts Centre Press, 1995) with the poetry of Michael Heald and Roland Leach. Her second, Going Feral (FACP, 2002), won the 2002 WA Premier’s Book Award for Poetry. Fremantle Press published her latest collection, Southern Edge: three stories in verse, in 2009.