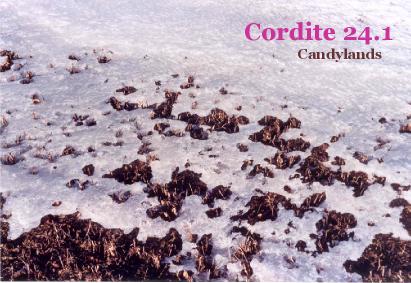 In February 2004 I went on a one-month meet-as-many-poets-as-possible trip to the U.S. A mobile phone would have made everything so much easier. I call my friend S from a public phone at LAX, eventually getting through. I dump my bags at his shared one bedroom flat and we go to a nearby market, where I buy some dice, candles, and the best cookie I've eaten in my life.

The first two poets on my list were Catherine Daly and Cal Bedient. Catherine picked me up from my slightly depressing hostel in West Hollywood (better than the overheated room with the chain-smoking Texan where I stayed my first night). Catherine is another Salt poet. We went to the contemporary art museum cafe, then she says let's see if Douglas is in. Douglas is Douglas Messerli: poet, editor and publisher (formerly of Sun and Moon, currently of Green Integer). The Green Integer offices are a short walk from the museum. Douglas is editing a ‘California' book in his innovative poetry series and asks Catherine to contribute. Upon meeting me he enthuses on the idea of an ?Australia' version. I look around the offices at all the poetry books I've never seen: American experimental, numerous books of poetry in translation. I bought a box.

Cal Bedient is the poetry editor of Volt magazine. Cal accepted two of my poems before I left, so I suggested that as I was coming to L.A. we meet. I'm not Mr Spontaneous in my natural state, but it seems Californians are. We go to the Getty museum and look at some great black and white landscape photography from earlier last century. Cal suggests I send a manuscript for the New California Poetry series: he's on the committee. I'd recently read a great book from that series: Martha Ronk's Why/Why Not. In response to my speculating on postgrad study, he also offered suggestions and made phone enquiries (I sent the ms – no luck; I've started post-grad study at Deakin in Melbourne).

I planned my trip to San Francisco to coincide with a Poet's Theatre performance. I met Kevin Killian (who played a hilarious Creon in a version of ‘Antigone' the following night) at the library. He and partner Dodie Bellamy gave me a bed for the night, when my intended host turned out to be sick with flu. Kevin mentioned Michael Palmer and gave me his phone number. After a day of more art, I climbed the steep hills to his house. It was great to have a new book as a calling card. He made me a pastrami sandwich and dropped me at the theatre.

I think there were four plays; one involved recitation of Prince lyrics. I met Robert Gluck, whose books Jack the Modernist and Reader were favourites of mine in the late eighties. I said (a too brief) hello to Stephen Ratcliffe; I met Deborah Richards a British poet at Temple in Philadelphia. Every second poet was a publisher or editor: Maxine Chernoff (Editor, New American Writing), Travis Ortiz (Publisher, Atelos) – or a new Brutalist (eg, James Metze).

After a dinner where I had my first root beer: it tasted of an aromatic disinfectant. I cabbed to the house of Del Ray Cross (Editor, shampoo) where I was to stay the night. Another night at Del's I gave a reading to a small group. Kevin was there and Stephanie Young, who reviewed the reading on her blog, The well-nourished moon.

I first met Devin Johnston and his partner Andrea at the Sydney Writer's festival. We were on a panel together, and he was launching his Australian book Telepathy (Paper Bark Press, 2001). Now I was going to stay with them for a week in their great big brick red house, I loved the barnish snow-adapted houses of the Midwest: and I loved Chicago Airport – where I first saw American snow – I had to connect to St Louis from there – with its advancing neon and warning message distortion.

Serendipity: we were to have dinner at Devin's dad's (also a poet) and Lyn Hejinian, who was doing a residency at St Louis University, and was also a longtime hero of mine, would be there. Then Judith Bishop also turned up. I knew Judith from Melbourne: she was studying for an MFA in at St Louis U. Lyn talked of meeting Mudrooroo in Perth, and of the heinous Bush (George W). I was in America during the election buildup. I only met Democrats.

The next day I went to one of Devin's classes and hung out with Andrea at the community radio station and played poker (Andrea has since published a book of poker tips). I checked out the galleries: most memorable were Richard Serra's black paintings.

Back to Chicago. Devin is also a publisher (Flood Editions, with Michael O'Leary; most recently they've published Robert Adamson's The Goldfinches of Baghdad) and we were driving up for a reading at Chicago University by Lisa Jarnot; he'd just published her new book Black Dog Songs. The snow was thick on the ground but it wasn't till the drive that I saw/felt it falling from the sky. (No, we weren't in a convertible: I felt it when we got out for a piss.) The reading was a success; I met a few more poets such as John Tipton and Timothy Yu. Then later at dinner, Roberto Harrison (editor, with Andrew Levy, of Crayon magazine) and Stacy Szymaszek: they'd driven down from Milwaukee. Stacy said the bookshop where she worked Woodland Pattern Book Center stocked Australian Salt books; I didn't see them anywhere else. She claimed it was the best poetry bookshop in the country. It was the coldest day of my life. I couldn't work out the conversion but it must have been lower than ?10 Celsius.

We stayed the night with Erik Steinhoff, charismatic editor of Chicago Review. I slept on the floor in a booklined study; I could have lived in that room for a couple of years without needing further entertainment. The next morning we had breakfast at a diner. I had my first authentic hash browns, so textured I thought it was rice at first. Very nice rice. That afternoon Lisa gave a lecture on Robert Duncan: the lecture came from the research she was doing for a biography on Duncan. I had left L.A. with a cold. The lecture was the peak of my illness: I had to keep leaving the room to try and hack my throat up. Despite this, Jarnot's readings of Duncan's poems revived my interest in him. I'd found his style too arcane before. After the lecture I met Srikanth Reddy, whose book had been accepted by University of California Press; and that night we drove across town past Oprah's penthouse to have dinner with Michael O'Leary and family.

Back in St Louis I found out that Mary Jo Bang lived there. I'd been attracted to her writing in Louise in Love. I'd left it too late – I rang but noone home. She later published some of my poems in the Boston Review.

Just one more thing to mention: the bald eagles. There was a spot outside St Louis, near where three rivers met: the Missouri, the Mississippi, and the Illinois where people went to spot bald eagles. They were a bit scarce that day. We – Devin, Andrea, Judith and I – saw a baby one in a tree nearby, another on a nature-made barge in the river. Snow on the ground; ice on the water. We had the famous fried fish sandwiches and they were good.

This entry was posted in ESSAYS and tagged michael farrell, travel, USA. Bookmark the permalink.
Michael Farrell's I Love Poetry and A Lyrebird: Selected Poems are both out this year (2017): from Giramondo and Blazevox, respectively. His scholarly book, Writing Australian Unsettlement: Modes of Poetic Invention 1796-1945, was published by Palgrave Macmillan.