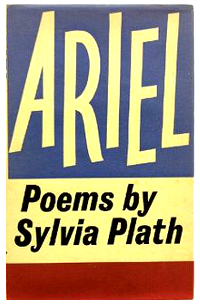 So much has happened to poetry since Sylvia Plath completed her last poems fifty years ago in 1963 that it might seem weird or regressively sentimental to focus back on them. But, encouraged to do so by a number of anniversary events around the globe this year, what strikes is the endurance of these final poems’ brutal clarity.

Having closely re-read, aloud, the poems of Ariel by Plath – whether in Ted Hughes’ Faber & Faber 1965 selection (cover image at left) and re-ordering, or according to her own earlier (December ’62) version, which excluded some of the great, later ‘last poems’ included by Hughes – I appreciated anew their authentic place in the canon, their vitality as a masterpiece work. In them, Plath put a stamp upon a century of poetic genius which experimented and developed the possibilities of free verse in English. She did this by fusing almost-perfected, virtuosic technical skills, groomed and grittily disciplined over her lifetime’s writing, with a new plumbing of free-verse innovation. This innovation included, but not only, her subject material. From ‘Paralytic’:

In these poems – including the later ‘Years’, ‘Balloons’, ‘Edge’ and Words’, added by Hughes, and some poems already in her version of the manuscript, ‘Daddy’, ‘Ariel’, ‘Getting There’, ‘Medusa’, ‘The Moon and the Yew Tree’ – Plath tells us: this is what free verse is able to do.

From the beginning of ‘Words’, the final poem of Hughes’ Ariel selection:

It is not tentative, reckless or haphazard ‘improvisation’, but a thing of deliberated, tensile and sustained syntactical nerve.

Plath would rise to write around 4 am – composing the ‘last poems’ – in the final few months before her death on 11 February 1963. From a note to the BBC by her in 1963, she describes the pristine air and plenitude of this space as ‘—that still blue, almost eternal hour before the baby’s cry, before the glassy music of the milkman, settling his bottles’.

Plath tells us herself that she felt compelled to ‘read them aloud to myself’. We know this from an interview and reading of poems made by her for the British Council. She continues, ‘Now this is something I didn’t [previously] do. For example, my first book, The Colossus – I can’t read any of the poems aloud now. I didn’t write them to be read aloud. In fact, they quite privately bore me. Now these very recent ones – I’ve got to say them. I speak them to myself.’ Finally, ‘Whatever lucidity they have comes from the fact that I say them aloud.’

Reading Plath’s poem ‘Daddy’ recently at an event, I was shaken by the experience of the poem’s physicalised, internal reverberation. Its language’s tonality, and the gale-force drive of that language as it mounts through the poem, was as resonant as if I was playing a cello, held to my body – proof of Plath’s vocalisation of the poems as they were being written. Craft-power, that.

On the innovation of subject matter in the Ariel poems, there is the common derision of Plath as a self-indulgent ‘confessional’ narcissist, likening the horror of Auschwitz and Dacau to her private terrors in ‘Daddy’. Simultaneously, we have commentators such as George Steiner arguing, ‘In ‘Daddy’ she wrote one of the very few poems I know of in any language to come near the last horror. It achieves the classic act of generalization, translating a private, obviously intolerable hurt into a code of plain statement, of instantaneously public images which concern us all.’

This double-take on an intensified ‘I’ and the transpersonal ‘I’ which, together, touch the authentic trauma of external events, is mastered in poems such as ‘Daddy’ and ‘Getting There’. It also allows them to be still, dismissively and simplistically, misread.

When we reassess Plath’s free-verse achievements, there is another motif that emerges strongly; her ability, in line after line, to capture image in language to the point of making image symbolic. This presents another paradox: we may read those images as personal, but they are also engraved beyond that. From ‘Getting There’:

The title of this essay, ‘It was a place of force—’, comes from ‘The Rabbit Catcher’, one of the dozen poems Hughes omitted from the Plath version of Ariel. To me, it closely describes the aura Plath wrote within during her last year. Much can be said about the voltage of these final poems where only a few words relent. Yet, in her control of the language, there is a governing, self-mastered sobriety, a sanity which acts to contain the poetry’s storming.

In the toxic mythologising of Plath as a young and tragic suicide, this sanity has often been obscured. In February 1962, Plath is quoted in the London Magazine’s ‘Context’;

‘the issues of our time which preoccupy me at the moment are the incalculable genetic effects of fallout [post-Hiroshima] and … the terrifying, mad, omnipotent marriage of big business and the military in America— … Does this influence the kind of poetry I write? Yes, but in a sidelong fashion.’

‘My poems do not turn out to be about Hiroshima, but about a child forming itself finger by finger in the dark. They are not about the terrors of mass extinction, but about the bleakness of the moon over a yew tree in a neighbouring graveyard … In a sense, these poems are deflections. I do not think they are an escape.’

I contend that Plath set out to conceal such an ambition in the poems of Ariel – to tattoo into her poems, while referring to the personal self, the existential and verifiable hells and heavens of this world. Reading, or re-reading, this collection is a project, for those writers who wish to take it up, that remains utterly contemporaneous to these times.

Jacinta Le Plastrier is a Melbourne-based poet, writer and editor. She edits the ‘Guncotton’ blog for Cordite Poetry Review, curates the monthly Gilgamesh Modern Salon and is Publisher at John Leonard Press. Her poetry collection, The Book of Skins, will be published March 2014.

View all posts by Jacinta Le Plastrier on Cordite →