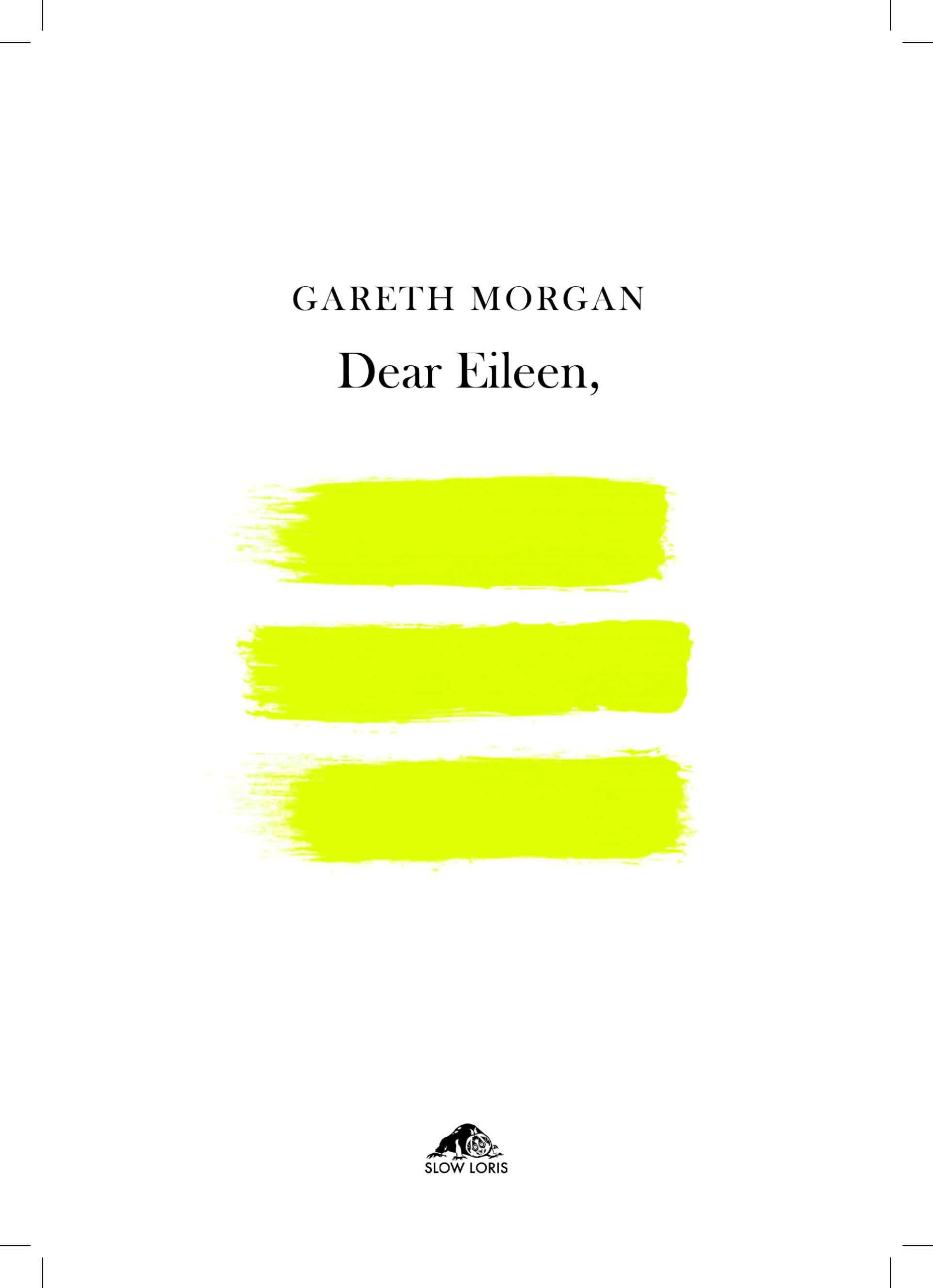 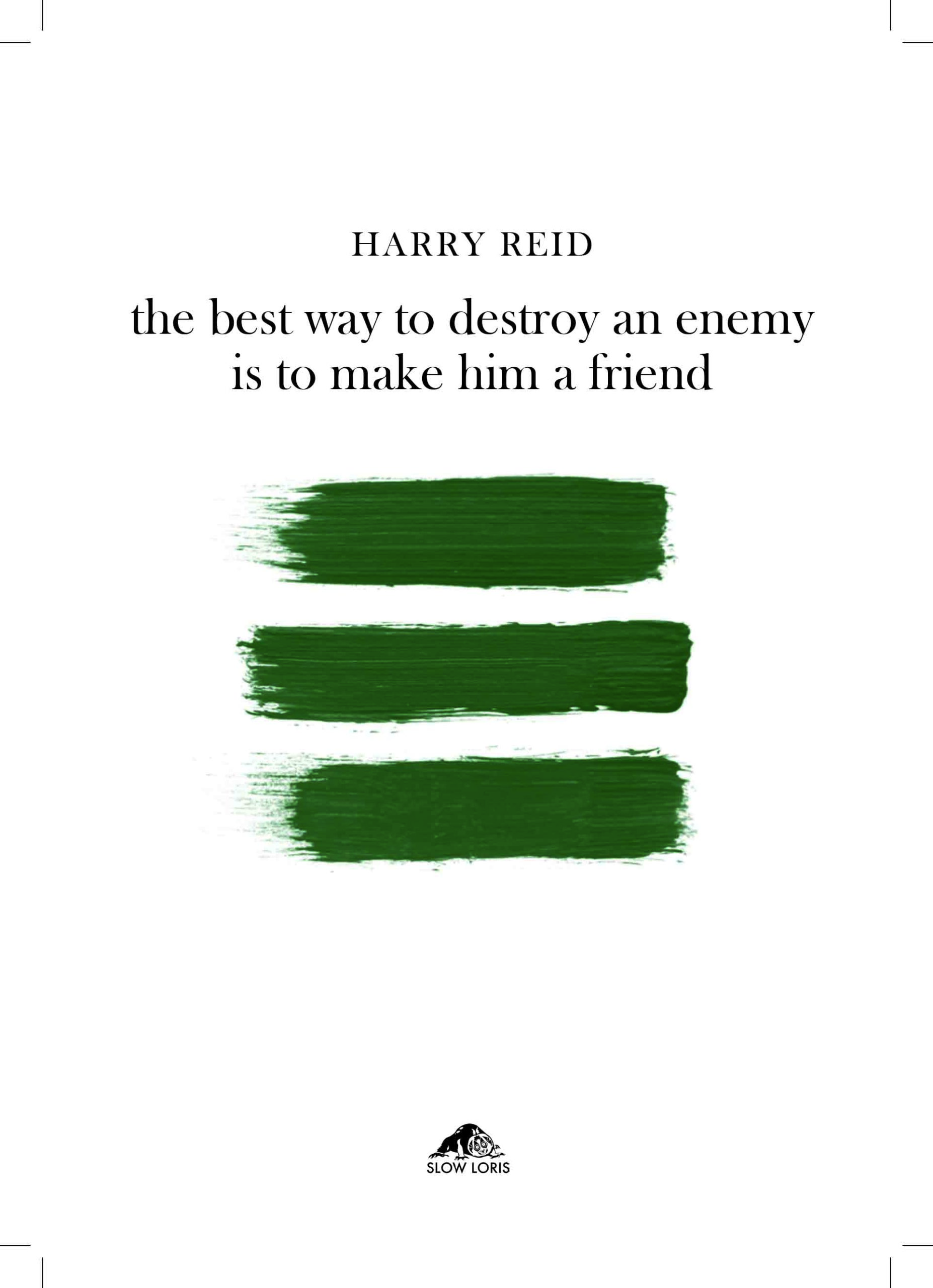 the best way to destroy an enemy is to make him a friend by Harry Reid
Slow Loris, 2020

Gareth Morgan’s Dear Eileen, is a focused yet restless collection of epistolary-poems addressed to the American poet, Eileen Myles. Published in 2020 in Puncher & Wattmann’s poetry chapbook series, Slow Loris, it is the Naarm-based poet’s first title.

In the past, his published poems have been mostly verse, though in this 24-page chapbook, Morgan (‘gareth’, or ‘g’, as he signs off) writes in prose. The 20 undated letters run on from each other to create what is closer to a book-length poem. While full of digressions, the poems are not discrete, but rather build and accumulate as the author tries to make sense of his conflicted subjectivity as a poet and as a postal worker.

We find out that the author works as ‘a delivery only postal delivery officer, or “dodo”, for short. a cute dead bird’. In the acknowledgements he thanks his father for getting him the job, and also thanks the Post for allowing him to write while at work, to be their ‘unofficial poet in residence’. This ‘residency’ succinctly frames the overlap of his two worlds. Morgan describes being able to listen to poetry podcasts while on his rounds – ‘this poetry-on-the-job is an on-the-go scholarship of nothing and everything, the flipping miracle of everyday life’ – as well as write while riding by speaking into his phone, which sits in his breast pocket. Doing these two things at once, he says, ‘was stealing back time’.

Indeed the language in the letters, bouncy and alive, evoke the feeling of writing while moving. Morgan’s syntax, spelling and style incorporate the casual text-message form using lower-case, shortened words like ‘tho’ or ‘yea’ as if writing in a rush, no time for commas after greetings or farewells and long run-on sentences with little pause for breath. This sense of urgency in the writing highlights the importance of time in Morgan’s day-to-day and how he frames his thinking about postal work and poetry. He even equates time with ‘the letter’ and ‘the poem’:

The epistolary form is deliberate and feels central to these poems, given the role of letters in postal delivery. It also allows for a level of uncertainty from the author – to write through ideas without reaching resolve. He moves between feeling ‘lucky’ to be employed as a postal worker and in a ‘totally unrelated field’ to poetry, ‘i have told myself – and now you: the reason i am a postie is the potential in it for pleasure’, while also finding the work unbearable, ‘eileen, i am feeling lost in this funhouse’, asking ‘what am I doing this for?’ He casually ponders whether work is a means of getting away from the self, whether poetry is a career, and if poetry can do something about the ‘subcontracting and the doubling down on exploitation and division of the working class?’ My favourite line nearing the end of the chapbook so beautifully and succinctly encompasses the author’s helplessness in his search ‘eileen, i feel like a stone, ripe to be piffed’. Despite reaching for clues, Morgan knows that ‘lucky’ is not what he should be feeling:

The letter framing also references, Afterglow, Myles’ 2017 book, which opens with a letter addressed to ‘Eileen’ from their late dog, Rosie’s, lawyer(!). Morgan thanks Myles for this book in his acknowledgements, and mentions it throughout. He draws a number of other parallels with Myles, and it seems intentional for the author to direct his letters towards a poet whose life experience relates, in some ways, to his own. The author particularly notes their relationships with their fathers, both mailmen and ‘dogs’. Myles’s late father was a postal worker and reincarnated as Myles’s pitbull, Rosie, and Morgan’s father, a postman and nicknamed ‘Bulldog’, is also a dog like ‘all mailmen’.

The poems mix with the speaker’s subjectivity through the introduction of other voices. These include books, audio/video recordings and past conversations with friends and fellow poets, revealing Morgan’s approach to poetry through community (seen also in his work with the poetry reading series, Sick Leave, co-run by his friends Ursula Robinson-Shaw and Harry Reid). Morgan creates a fabric of influences through quotation and imitation, and these references lay the landscape of Morgan’s thinking. Myles’s influence specifically can be seen in the accessibility of language, everyday-ness, as well as fluid-yet snappy style of the poems (a style of Myles’s, which they adopt – as Maggie Nelson describes – from ‘the New York School’s love of fast talk’, allowing the movement of deflected thoughts to orient the poem). Morgan also readily acknowledges Myles’s influence within the poems themselves: ‘i wonder if i am just doing so much copying or echoing – of you’, and, ‘i am listening to you again and reminding myself of the time i rode the trains and thought for the first time you and i were one […] i was so in your voice i even thought i was a lesbian’. The poems can be read as a way for the author to channel the voice of his addressee, as well as the voices of other influences, to find answers more than his own.

Pages: 1 2 3
This entry was posted in BOOK REVIEWS and tagged Gareth Morgan, Harry Reid, Rachel Schenberg. Bookmark the permalink.
Rachel Schenberg is an artist and writer who lives in Naarm. She recently published a piece on Eileen Myles’ poetry archive for un Magazine, and is the author of a trio of chapbooks mouth mouth, to the skin on boiled milk, and Quail eggs eaten from the hand in fog make everything aphrodisiac (True Belief, 2019).