Review Short: Love, Sex and Death in the Poetry of Bolesław Leśmian, Translated by Marcel Weyland 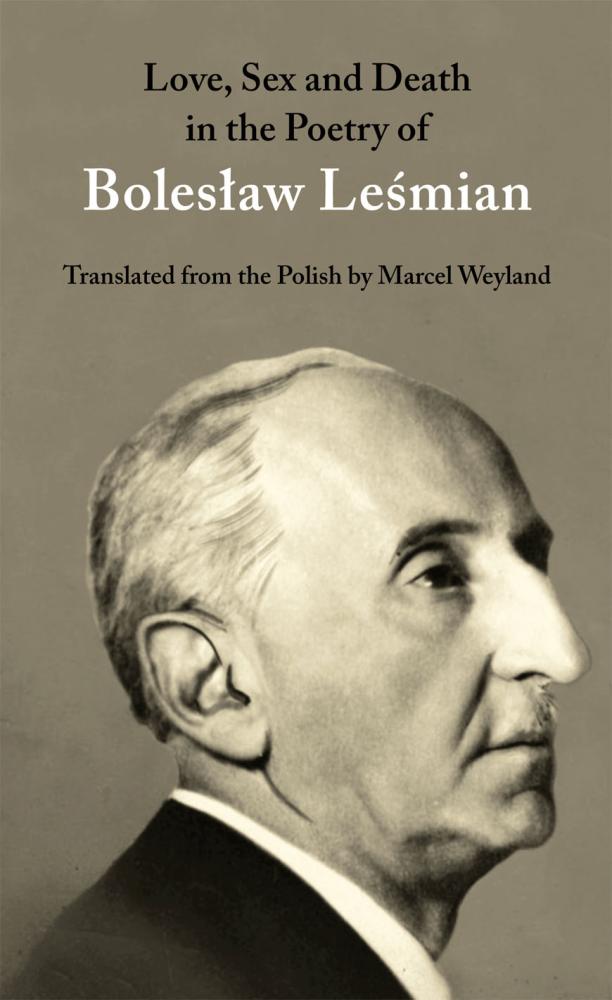 In this new collection of translations, Marcel Weyland acquaints contemporary readers with Bolesław Leśmian (1877-1937). The book makes us witness to the self-construction of an early twentieth century ‘outsider’ poet who won’t hesitate to invite you into his world. Weyland has taken up the heady task of translating a poetry that is difficult in its original form. Leśmian is celebrated for his creative morphing of language, playing with rhythm, and inventing of words in Polish. So we commend Weyland for the gritty labour, and applaud a translation that maintains the musicality of the original. The book sets aside chronology and does not forcefully segregate the three titular themes. The poems are unencumbered by footnotes and often dates are left absent; the only demand is to enjoy the gentle music and sprightly movement of each poem.

The prudish man on the cover is a strange image of the author, one that is at odds with what we find inside Weyland’s collection. The speaker is a proud, if furtive romantic throughout. We see him playing in a garden like a child, or as a young man gazing at one of his many lovers. The speaker invites you into the space of the poem where his persona is erected, cocooned against the real world modernising and going to war around him. From this ‘other’ place, the poet tells the reader about his secret acts.

It is as if he cannot help but share, his excitement getting the better of him. After spilling the goss, the poet realises in fact that his lover’s sister is in the same garden, and is quietly privy to their affair, too. The action is deviant, but in writing it he brings the illicit play back to the public through language – from the raspberry thicket to the page – unapologetic. On the one hand Leśmian disrupts the privacy of his personal utopia with a public voice that shatters its perfection; on the other, he activates the possibility he has discovered for the reader. It is a poetry that searches, discovers, brags in the act of giving.

If, as Samuel Sandler notes, Leśmian conceived the main task of poetry to be the restoration of the mythical perception of life, ‘The Secret’ enacts Leśmian’s desires as a writer to unearth secret narratives, new possibilities, and re-present them in a poem that is musical, memorable, public. Before blithely commending this heroic work – this salvaging of the people from horror, banality or ennui – we should ask what is or was at stake when we let this poet forge the mythic perception of our world?

The book displays a romanticised life of the poet trying to live outside society, usually in the garden, fawning over flowers, or caressing a woman’s body. Today’s readers could get tired of Leśmian’s incessant ‘caressing,’ a word which reappears page after page and illustrates the poet’s tone: gentle but insistent, it is univocal. He is giving; we (like her) are receiving, heightened for having been touched in some way by the poet’s hands and speech. While my response to historical specificity should take much of this with a grain of salt, and perhaps attempt to situate myself within an imagined original readership, it would be a shame if the unbridled masculinity that haunts Leśmian’s poetics should fall uncriticised. Sorry to be crude, but do we really need to watch an old man masturbate in his sumptuous self-made garden? Why do we desire access to this view, then as much as now?

Any discussion of this book should acknowledge that introducing a contemporary readership to an author outside of the (Australian) canon, and to a language that is marginal in a global context, is a valuable act. But perhaps it is less productive to assume the position of the fortunate reader basking in the glory of our book’s twin creators. The rhetoric of Leśmian’s intimate, secretive poems rests on the assumption that in being invited to a ‘secret’ place – the company of a Great man in a utopia he alone has provide – we should feel lucky. His poetry encourages a reception that is passive, caressed – but is that all we want a poet to do?

We might ask, as the final poem does: who is ‘the poet’?

This poem is illuminating in its deconstruction of poetic practice. It almost undercuts the masculinist romantic drama of much of Love, Sex and Death. The poet is a ludicrous figure when placed in the real world, ‘taking pains / to thread words on a rhythmic string, while she complains…’ (Finally, she speaks back!) and ‘God, word expert […] notes his failure in making an income for rent.’ This is the first time I laughed when reading the collection, and is an important moment for this reason. That Weyland has included ‘The Poet’ and positioned it as if it were an epilogue, somewhat relieves readers who will be squirming at lines like ‘I’d possess you for ever…’ (‘When upon my bed you’re swooning’) and ‘… I fancy to press / you to serve me…’ (‘Sometimes by blind urge fevered’). We can see, at last, that writing poetry – like translating it – is a bit of fun, and sometimes words simply ‘drag around […] pretend to mean something, but do not mean much.’

Beyond play, though, the poetry savours the refuge of intimate moments in the face of a harsh world, particularly in the face of death. In a Europe haunted by war, Leśmian at his most interesting takes the conceit of love and sex as a way of talking to death and outrage at war’s horror. Gazing at his lover’s ‘dear breast’s breath and […] dormant form’s stir’ he muses:

Magic and myth seem to be most important when we glimpse the threat of the world Leśmian always implicitly rallies against, repression and death. As antidote, the book offers its page, playful and triumphant. You choose if you will indulge this heroism.

This entry was posted in BOOK REVIEWS and tagged Bolesław Leśmian, Gareth Morgan, Marcel Weyland. Bookmark the permalink.
Gareth Morgan is a writer from Melbourne. In 2016 he is completing his Honours in Creative Writing at the University of Melbourne, focussing on Gig Ryan for his thesis. He writes poetry.