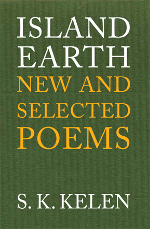 On the way back from the Frankston Motor Registry, my Singapore-born nephew, now the proud possessor of his P-plates, drove confidently and in a celebratory mood. I was happy that learner had turned ‘chauffeur’ so that I could revert to one of the idle contentment of life – reading aloud from a new collection of poems without pressing interruptions. I decided to try out The Poem Relevancy Test with a couple of random pieces. In his early twenties and now at university, this post-modern Everyman communicates mostly through text message and is one of the vast majority of non-poetry readers. Thus, Island Earth: New and Selected Poems became the tome for some stick-the-finger-in-the-page bibliomancy while we motored through death-camp quiet suburbia.

My prime digit stopped early at some Kelen juvenilia: ‘Chairman Mao and Charlie Brown’, with its charmingly dated critique of Communism as a comic strip. It was the reference to Snoopy that grabbed interest. Being more into man-perfumes than Marxism, my nephew had also recently acquired his own first follower in the form of a black Labrador pup named Ross, thus reversing anthropomorphism and endowing the tyke with human characteristics. On theme now, I followed up with some of the other early ‘pooch poems’ where the life of the artist doubles as a metaphor for a young dog – in Kelen’s case, a mutt named Kafka – in which the vicissitudes of larrikin existence run parallel to the eager panting of a new poet first appearing in print. My WhatsApp-savvy nephew could relate to this canine portraiture as it touched on his own new master/slave relationship. (Don’t we keep pets to be adored without question?) He said that if this was poetry it was ok because it told jokes and was about ordinary stuff his generation could relate to.

I immediately felt old, in spite of the fact these vintage Kelen dog poems were my own publishing age. Yes, I have followed their first appearances in print over the years and am a fan. Many of them are old friends. The nephew didn’t ask to borrow the volume for later (not his or the poetry’s fault). This is the common problem of relevance that poetry faces when competing for attention with today’s multimedia smorgasbord, especially when the poetry hums and whizzes with pop culture references as Kelen’s does. Today’s multi-tasker has only a dog’s brief span of attention before moving on to fresh tree-trunks.

Meanwhile, in Kelen’s puppy-nosed universe, those loveable Hunds (with pure bounding energy) are not unlike young Kelen poems. Later, the spirit of the dog matures more into Wile E. Coyote, linking him to a broader earth of eco-relationships. Indeed, animals are one of the Kelen touchstones and perhaps more enduring than his first cartoon versions of animals: Snoopy, Bugs Bunny, Mr Jinx, Sylvester et al. Interestingly, from the first he has drawn from the lives of spiders and moved up the food chain to turtles, sea lions, cobras, cats, possums, rats, tigers, bears, not to mention bush birds. Cockatoos, galahs and kookaburras have also been there since the beginning as motifs of the raucous and instinctive, as well as representing Kelen’s developing ecological focus. They are representative of human behaviour as much as the animal world. Unlike often surreal or comic suburban satire, the animal poems less self-consciously evoke Big Notions: ‘Cats are ‘the tiger’s/ One great soul…’ (‘Tiger Lil’). Creatures arouse his curiosity. In fact, although a dedicated suburban dweller, Kelen goes under dingo skies in Australia on occasion – or overseas he finds wild jungles, prairies and deserts which link back to Australian encounters with domestic dogs, cats and those bush birds – those go-betweens on the cusp of great suburbia and the native tree line, that border we keep shifting, which still reminds us that we are part of a larger bio-system.

Animal matters are not all that constitutes this Kelen Selected. It has this totemic thread of naturalist wisdom underpinning a social conscience that has never been afraid to go head to head with public issues. At various points Kelen has addressed ‘Boat People’ tragedy and refugeeism, issues of humanitarian responsibility, wars waged on Vietnam, Iraq and Afghanistan, or the come-home-to-roost reality of US imperialism after a hijacked airliner took down World Trade Centers I and II. Such themes are part of the terrain of ‘Kelen Country’, and meeting up again with some of these works is like being invited over to the Kelen household for a few tubes with mates talking old times and hard battles. This Selected does give them more historical resonance than contemporary relevance, which is partly the purpose of such volumes. Interestingly, the Twin Towers / Pentagon poem, with its history lesson on consequences, is not included in this volume. Is this omission an admission that some poems are necessary hot buttons of public experience, but have life spans as limited as protest songs?

If Swiftian allegory is the saving grace of satire and gives it longevity and relevance over time, allusions to cultural behaviour and public moments animate Kelen’s poems about Homer Simpson-like figures. In his case, Homer the cartoon character functions as an objective correlative for our continuing discussion of real suburban life. Likewise, Kelen ironically lets loose past literary pop idols such as Byron’s Don Juan in the shopping mall. These kinds of poems dust off characters as romantic tropes from literature for contemporary purpose, or reverse the referencing by locating ‘Bugsa’ Bunny and Sylvester as they chart the gondola canals of Venice, that ‘ancient Disneyland’ of the art world:

Poems like this evolve out of a literary equivalent of pop art pastiche, cut and pasted for ironic effect. In my opinion, they are not bad art and have certainly entertained us in the past, yet marshaled here in this Selected they are less fresh, and point to a style or technique now the staple of magazine design, not the art gallery. For me they have fading durability. To be fair, using pop culture subjects makes Kelen a chronicler-hero of his time. To highlight these cartoon characters as motifs for human culture is to over-emphasise the temporary in con-temporary. That act runs the risk of rendering the poems irrelevant as their cartoon characters’ relevance fades. Have we admitted Mickey Mouse, Bugs Bunny and the rest to the pantheon of enduring cultural heroes, or have they been consigned to the shelf marked ‘Cliché’?

Kelen is a poet with courage enough to take on contemporary culture and public concerns and claw back some of poetry’s old territory annexed by modern media. Unfortunately some of the poems produced from this impulse may also not pass time’s test. Kelen’s works of this kind are well written, accessible and don’t club the reader with their social concern. They deploy comedy and satire as weapons of mass entertainment. He crafts clean lines – faithful to the poem as a language artifact – while attempting to deliver ironies and write a resonating cultural history of our times and views world crises and radioactive issues from the kitchen window or TV screen through serious-funny life-affirmation alongside celebratory idylls that Vote 1 for quotidian life:

Chris Mooney-Singh divides his time between Melbourne, India and Singapore where he is the founder of The Writers Centre, Singapore. Two of his plays have been produced, as well as short fiction and three collections of poetry, the last being The Bearded Chameleon (2011) set in Northern India. Mooney-Singh has also recently completed his PhD (Monash) on the poetry of Harold Stewart as well as a verse novel Foreign Madam and the White Yogi commended in the Victorian Premier Literature Awards 2015 (unpublished MS category).

View all posts by Chris Mooney-Singh on Cordite →