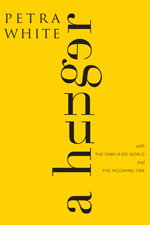 Petra White’s A Hunger is a kind of Collected-Poems-so-far, containing her two previous books, The Incoming Tide and The Simplified World, and a new collection that provides the overall title. It is not a large body of work but it is an impressively consistent one and a third book is often a good place from which to get a grip on a poet’s overall orientations.

A Hunger begins with a thirteen-part section devoted to love poems. The poems, though autobiographical, are highly analytical and there are few voyeuristic pleasures to be gained by reading them. Petrarch seems the main model invoked and Dante appears in the title of one of the poems, ‘Selva Oscura’ (which makes a nice wordplay when it says, ‘Ourselves obscure us’) but it is hard not to think of the Metaphysicals as the most important influence. It’s no surprise, then, that the poem after ‘Selva Oscura’, ‘The Ecstasy’, should recall Donne in its title.

The focus is on the psychological and on the sheer weirdness of intense, ‘true’ love. ‘What is he that he has me, / making me think he owes me his self’, asks the first poem and the series goes on to explore various paradoxes. Among these are the way in which the relationship is a willed damage to the self, ‘Love is a thing, the self’s / undoing that it begs for’. There is also the weird dual-solipsism of the situation whereby any outsider is both a ‘poor creature / who shrivels outside all this’ and, at the same time, one of ‘those giant people who survive / without the whim of his attention’. A trip into the Pilbara suggests that love is even capable of holding off the notorious Dreamtime spirits of that area.

‘By This Hand’ is a clever self-referential sonnet, but its first line – ‘In these black lines alone can our love live’ – is significant. It recalls Coleridge’s ‘Dejection: An Ode’ which, famously, says at one point ‘O Lady! we receive but what we give and in our life alone does Nature live’. If Petrarch, Donne and, to a lesser extent, Dante, are the poet-avatars of love, Coleridge is the poet-avatar of depression. It is thus no accident that one of the love poems allows depression to make a brief appearance.

In a parallel way, love makes a brief appearance in the next section of five poems about depression – a section dominated by the impressive ‘Ode on the End’. As with the poems about love, there is nothing superficially documentary about this poem. It is essentially analytical and its perspectives are unpredictable and revealing. The first section, for example, is an engagement with the biblical psalms and White comments, surely correctly, on the way in which an individual’s fight against her local enemies is often inflated into a cosmic battle which, in turn, produces a god who is ‘outlandish and vicious’.

This seems to parallel – though I count my blessings to have no personal experience of this – the way in which a trivial unhappiness inflates in a person suffering clinical depression, and into a shaking apart of the glue that holds the entire cosmos together, destroying ‘the certainty from my hand that grips its object’. As a result, the overwhelming sensation is of fear that practises ‘its little song, / its rattle of flies, / slow shrink of mind / and heart // to a field where love can’t live’.

If there is a unifying theme in the poems that make up the third and final section of A Hunger, it is the examination of the opposition between freedom and enclosure. This is laid out in the first poem, ‘Feral Cow’, which describes a how lone cow ‘tap-dances on the edge of the road’ while an endless procession of trucks carry others of her kind to the abattoirs. It is one of those poems which, if extracted from other poems by the same author – put in an anthology, say – leaves the reader puzzled as to its significance. But three collections of Petra White’s work give a locating context within the theme of containment and freedom. Yes, the cow is free, but the poem is no naïve celebration of a freedom that is a result of being cut adrift from all structures: as the poem says, ‘unfenced from dream / of herd, field and farmer’. Herd, field and farmer – uncannily reminiscent of the colleagues, building and superiors of White’s many poems about the bureaucratic life – form a structure that enables productive work. Of course, in the cow’s case, that means joining a cavalcade of one’s peers going to a slaughter-house where their only ‘production’ will be meat for humans. But the poem’s conclusion – ‘Infinite cry of road, / tongue-spiking spinifex’ – shows that being a lone domesticated beast in the wilderness is no picnic either. Perhaps there is a reflection here of the old case in support of the Neolithic revolution: the domestication of animals is a bargain which ensures the animal a longer and healthier life in captivity than is available in the wild as well as, comparatively, a better death. Another poem, ‘The Cat, Marina’, about training a cat to become an indoors animal, says openly, ‘she is prisoned / that she might live longer’, but in the long run, I think both ‘Feral Cow’ and ‘The Cat, Marina’ are more allegories than poems about animals and domestication.

There is another series of poems about bureaucratic life, ‘The Sound of Work’, which now rather clicks into focus as a study of one kind of virtuous, reasonably productive, containment. It makes sense of the way in which, in White’s first book, a long sequence on office life was followed by a sequence detailing the adventures of a hippy party driving through the Nullarbor. The poems here are exemplars of a kind of containment and a kind of freedom.

A Hunger finishes by reintroducing darker poems. ‘Film Script’ describes the dark figure who always advises self-harm on bleak days, and ‘The Unanxious Mind’, while seeming a celebration of mental freedom, reminds us that it is a very vulnerable state: ‘the light that shines / around its eyes is balanced upon a pinpoint’. The final two poems move into areas of public rather than personal bleakness – culminating in the Victorian bushfires of five years ago. I don’t think a public poetry is White’s strongest suit, but I am impressed by the way in which, instead of standing outside and observing such issues, she sees them as what happens when a sickness in the soul spreads to the whole world.

This entry was posted in BOOK REVIEWS and tagged Martin Duwell, Petra White. Bookmark the permalink.
Martin Duwell formerly taught in the School of English, Media Studies and Art History at the University of Queensland. He was also, formerly, the proprietor of Makar Press. He now writes extensively on contemporary Australian poetry as editor of Australian Poetry Review.