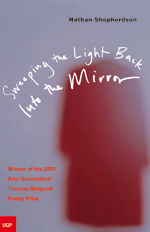 Sweeping the Light Back into the Mirror by Nathan Shepherdson
University of Queensland Press, 2006

Peter Minter's latest book blue grass and Nathan Shepherdson's début collection Sweeping the Light Back into the Mirror work with extraordinary images to convey the demands made on memory for accuracy in its language. Both poets set out, deliberately, to interrogate such a language and its subsets – naming, recognition, and the calculation and politics of categories. For while as writers and readers, we have limitations on the material claims we can make to increase emotional satisfaction in our lives, we have an unlimited capacity to request answers from what appears to be immaterial – the memory of words spoken by both loved ones in absentia and barely remembered friends. We not only demand these words, but also try to challenge their immateriality with concrete language.

Minter continues his adventure with waves – begun with Rhythm in a Dorsal Fin (1995) and taken to a near-perfect lilt in Empty Texas (1999) – and presents visual memory at its most resounding; for example in ‘106':

fails to open
the scent we remember to name.
soil & tumescent roots
archiving memory of rain
as if each drop
could be forgetting that history
is beyond us
(

just doing remains
like water–evaporate
considered & just–
with i's to praise
with tongues, these eyes
to praise

Shepherdson's speciality, on the other hand, seems to be addressing how we cope with the task of seeing ourselves listening while carrying on with the ordinary occupation of grounding ourselves; for example in ‘No.43':

While those archived memories stand out and apart from our material lives in isolation from their contexts whenever we talk about them, they are as ordinary and as desirable as tasting the most exquisite meal after a long wait, or coming out of a mathematical calculation with a satisfying conclusion after a deliberate, reasoned argument. Those memories present themselves as conversations which seem to carry themselves despite our other actions. They persist regardless of the demands made on us by the ‘real'. What makes these moments unusual is that they, like poetry, have qualities peculiar to themselves. They allow us to exhibit choices in determining distances and crossing perimeters in virtual landscapes as well as those between virtual and concrete landscapes. This allowance seems enabled by using a series of commands to address the landscape, to command oneself into it and to move through that landscape. Once in the landscape, every choice of direction engenders an action and the creation of movement, every movement engendering crossings-and-reflection. I think that Minter's blue grass has a particularly good grasp of this idea.

According to Peter Minter, we are ‘hearing' those words in our visual landscape differently than we did at the end of the 20th century – or, at least, Minter is hearing them differently. You might say that blue grass is Minter's noisiest book. He seems to be trying to communicate the same ideas as he did in Empty Texas. What he is doing differently here is communicating the ideas to us in a way we expect to hear our world in the 21st century. Take, for example, the series entitled ‘Political Economy & Raphael's ‘Madonna of the Pinks''. This makes blue grass a kind of collaboration of conversations, emptying its phrases and part-remembered sentences – ‘bits and pieces' together – so seamlessly, it seems a happy and successful coordination of waves of requests and answers.

Furthermore, what Minter has given us in blue grass is akin to taking the jigsaw apart. We are more aware of the pieces than the whole and the importance of the visual impact of each fragment. Even his embedded references confirm this. Minter's notes to ‘I just do eyes, j-j-just eyes' acknowledge that he has taken its title from the Ridley Scott film Blade Runner (1992), without reference to the novel that inspired the film, Philip K. Dick's Do Androids Dream of Electric Sheep (1968). His allusion to the film and not the novel (perhaps the latter is one of his omissions), however, adds greater poignancy with regard to making connections within and without the poem as a document of visual memory:

Men with orange shovels
Arrive at the so-called ‘dawn of life'
as I return to the same strange dream:
iron bleeding in the lens cap &
pine trees in cool, extrinsic blocks
fall from a sentence above.
‘As if!' they call from the dream before,
‘Ode to Joy' constantly risking absurdity

like a ‘freud elegy stanza'
slavish in twilight chromatics. The Hydrogen jukebox
stacks it then, sheaves of brilliant yellow
hills are alive wit the sound of music
cry as wasted crows as they rise
& fall back, so hammer & thongs. No joke!

Minter rightly includes notes at the end of the volume, although the notes are preceded by an apology for the likelihood of omissions. In fact, it would have been a more modernist book without the notes which include literary references as well as anecdotes. The Minter first-reader would be lost in knee-high grass. The notes, filled with communications across poetries, music, film and conversations, recalled first hand or third hand, often appear to be about the most obtuse matters largely because their words come to us in Minter's poems as fragments or chatter. It is better to embrace the population of notes than to fear them, for Peter Minter's work will pose no difficulty for a newcomer to his work aiming to discover the poet by stepping into his latest book first. It will not only be a pleasure; it will be an education.

These, you might say, fundamental sounds or, rather, soundings are also the heart of Shepherdson's series propositions. In blue grass, as the Prince goes home to find his past errors and joys greeting him (to draw on Minter's Homeric references), his lineage is naturally classical. Shepherdson's, however, is post-modern and Freudian (some are bound to find Oedipal complexities in his book). To put it more simply, in many ways, Minter's soundings are an appeal to listen; Shepherdson's, a petition to be heard.

Sweeping the Light Back into the Mirror makes of one man's world a place to be questioned and propositioned from every angle. At first, the objects Shepherdson describes appear in situ, fixed, as ‘grave stones'. Later, they move on their own, appearing to unfix rather than change. Yet, they are remarkably active. They have the ability to move each other, even moving the make-up of their composition, their essential quality – hence giving the appearance of ‘changing'. It is a mistake to see them as changing and initiating change in the narrator or speaker. Words become objects which always remain active even when appearing to change to something static. In other words, they function as thought-forms. Shepherdson has brought to life not only the subject addressed, but the form of thought the subject – the loss of a mother – is believed to express. In this sense, if thought-forms become just that – forms – Shepherdson is telling us that interactions involving forms and events are bound occur, if not concur, when we experience ourselves in memory. It is his handling of the desire to grasp and record the gains from human loss that makes his book quite remarkable.

Here, conversations abound, but, in Shepherdson's hand, quite differently from the way they did in Minter's. Whereas the populations Minter addressed in blue grass were very vocal, in Sweeping the Light Back into the Mirror, the author is doing virtually all the talking. For example in ‘No.38':

Shepherdson also takes us to places that Minter does not. To dream of numbers is a most impressive encounter. It leads to abstract considerations that are likely never to have presented themselves in such a way to the dreamer before, whether you are a mathematician, an avid punter or simply someone who barely remembers a dream fragment only to find yourself with an equation's answer and empty brackets ahead of it. If I'm reading Shepherdson consistently, he is saying that not only does a reader create this type of text when reading poetry, the text creates the reader in a space where gaps already exist to allow (or accommodate) the reader to participate in the space already designed for each person. In ‘No. 39', for example:

Both poets seem to be saying that in these attempts to record a sounding, it is not only that the object sought after is immutable, but that the reader becomes immutable too. In this way each of us finds a kind of immutability or, more in keeping with Shepherdson's search, immortality. In the temporaneity of each experience of a poem, the reader transcends himself or herself to find other worlds living simultaneously with the one that initiated the reading of that specific text. This action may be repeated innumerably with the same text, through different or even same-seeming gaps to find more and more infinite spaces, or with different texts, multiplying the experience which can be returned to (or redeemed) and which can be relied upon to do so. Both Minter's and Shepherdson's recalled lines of conversation, acting as doors to these spaces, become valuable to us. And these spaces in turn roll on as determinants in allowing us to reach beyond whatever scenes in mundane existence seem to be limiting. This value is the most, if not only, profound aesthetic value upon which we draw or aim to draw when we read a work of art and, also, why we need to read such art.