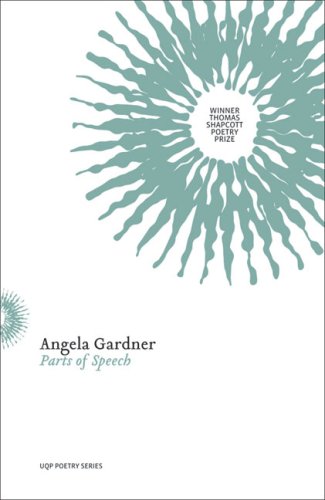 Parts of Speech by Angela Gardner
University of Queensland Press, 2007

Angela Gardner's Parts of Speech shows what a substantial first book of poetry is all about. Gardner has responded, above all, to an ideal opportunity to show what excites her thoughts and propels her into action as a poet. Her ability to turn that initial energy into a form of words both excites and challenges the reader. In this regard, Gardner seems urged to speak about what small actions may be worth pursuing to maintain or re-create a natural and preferred order of events.

Gardner seems drawn to particulars of motion. Her approach makes Parts of Speech into a discovery of the kind where what has been taken for granted is purposefully being re-injected with new patterns or old patterns re-used newly. In a sense, part of the excitement that the work engenders comes from its being a study in discovery that is not properly so (that is, a brand new finding or invention) but a revisiting far enough removed from an earlier connection so that the latest association feels like a new meeting. It therefore tries to do what all poetry attempts, to return to what was just experienced in order to view it again more clearly, with purpose.

Gardner's journey through old ‘woody' worlds unfolds with an ordinary familiarity alongside the occasional surprise of metal and industrial activity. But what primarily engages her is the relationship between ways of speaking about the ‘old' world and the ‘new' in, for example, ‘October', and this, ‘The old names':

While the earlier sections of the book are filled with such notable observations, it is in the fourth and last section entitled ‘Three Positions' that Gardner really seems to become interested in her subject in earnest and takes on experiments to expand the old world vs new world theme begun in the first three sections. In ‘Three Positions' she considers the relationship between effort and goal and responsibility or as she puts it in ‘Possible worlds':

Then there are small inappropriate acts
of fragility or faith

A persistence of events
even at times a standard notation

She speaks of natural events (such as, ageing, distance, space, the weather) made mysterious by curiosity and speech as in ‘Lightfast' where life appears solid by light but everything is taken to be uncertain and ‘unpredictable'. She captures a sense of wonder and fantasy that may surround new ideas as thrown up by questions posed by trying to comprehend ideas held in scientific terminology as a means to understanding ourselves at an individual level. Her undertaking presents references to such terminology as if they were ideas still so new to us they are more magical than scientific. Our responses still sound and feel medieval, even in the face of what we consider to be the facts before us, so that Gardner gives us the ‘poles describ[ing] a circuit' while our eyes (and, perhaps, our minds) show us ‘wide dark areas of sky' in a ‘crowded galaxy' when clearly the latter relationships are not scientific nor even particularly poetic; specific knowledge still proves itself in uncertainty, in poems such as ‘Lens and mirror', or this, ‘Altazimuth':

The earth's poles describe
a circuit in both space and time

sweeping across constellations
the sun's ecliptic

the occasional star-cloud
or glowing nebulae

If there is a form she prefers, I would say Gardner seems to be using something of Arnold Schoenberg's 12-row system or serial repetition of a musical 12-semi-tone chromatic scale, each group of sounds forming a ‘row' that may be played forwards and backwards. Each row in such a system was meant to hold up a thematic structure, much as Jack Hibberd used it in The Genius of Human Imperfection to focus point and counterpoint in human relations. Gardner first introduces this approach through poems made of couplets, ‘Notes for a day at the National Gallery', ‘Twelve postcards', ‘Twelve labours' to a steady purpose (her use of numbers and seriality, not gone unnoticed) anchoring motifs of axes of motion, telescopes, mirrors, horizontal and vertical rotation. Her dichotomous themes support this: Cartesian duality, rural and industrial, industrial and post-industrial, aloneness and oneness with the idea of universal schemes. Atonality serves her well in her emphasis on the point where the serial ends and rotates or begins again, so that her approach is more subtle and less easy to move through than that of Hibberd's rhymes, for example. Sometimes, however, I wondered at Gardner's syntax and apparent (or what may well be in some instances) misspellings and typographical errors in a few poems (see ‘Redemptor' and ‘Three positions acting on space'). There is no doubt though, that the strength of her approach is appreciated when it is clear that the poems become very real events to us, as readers, when the occurrences within them and the matters they describe give value to the poems through a kind of serialisation via readers' memories of those or similar events.

While, on the one hand Gardner may not be using the atonal system expertly, on the other she certainly is doing so playfully, in the sense, at least, that other poets, such as, MTC Cronin, also seem to be doing so. All in all, her purpose appears to be that there is no structure save our ability to individually create one as we read words, the sky, our memories. And so, the poem or language instruction becomes a transaction of a kind of serial framework, in this case. Gardner's work is not only about the structure of speech-sound but about the structure of sound-space, drawing a similarity between her work and Peter Boyle's in Museum of Space.

The question she is presenting, finally, is ‘do these actions that consume us (intimacy, saving the natural world, travelling in space and time, saving ourselves) exist prior to or separate from us?' as exemplified in the title poem ‘Parts of speech' and in ‘Bring your ear to my mouth'. She is asking whether or not such actions come ‘into being' because we become aware of them or our recitation of the right ‘rows' of thought creates the awareness with which we make our corporeal world more ‘real' in the greater context of a universal understanding, creativity and knowledge of how best to treat our bodies and – for our corporeal purposes – our physical world. Which ‘row' do we brace ourselves against? Which one do we look out onto? The poles describing circuits as we have been told they do or the dark spaces of uncertainty where the hope is that in no time at all, everything learns its harmony? Perhaps Gardner offers us an answer in ‘Bel canto':

one voice and another
between language and coupling

not your present truth

that devour how when
when – glass paper metal plastic

all the elements –
into an imitating movement

traced back to the work itself

of intention a glancing gaze
or silence remembered

even in the sweet mistaken
wholeness of the body

This entry was posted in BOOK REVIEWS and tagged Angela Gardner, Bev Braune. Bookmark the permalink.