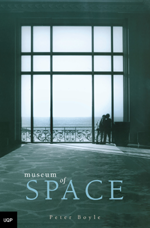 Museum of space by Peter Boyle
University of Queensland Press, 2004

Peter Boyle strikes me as a poet who likes the air, much as Peter Minter likes water; Robert Adamson, leaves; Jordie Albiston, defined/confined spaces; John Tranter, lines or, rather, the lineage of the cursive. Boyle most reminds me of Robert Adamson with his gentle, probing style, his yearning approach to all that should be desirable–an understanding of ourselves in space and time, wherein we point all our limitations. In this context, Boyle holds his place very well as a watchful observer of the world (e.g. the wind, sunlight, birds, music, reflections, waves) and other writers (e.g. Rilke, Saint-John Perse, Jabès).

Museum of space is divided into three parts (with two pages of notes to explain Boyle's references and borrowings). It seems that the second section, ‘Jottings and Other Poems', stands as a kind of active intermission between the first and third: ‘The Museum of Space–ètudes, Part I' and ‘Philosophers and Other World Leaders–ètudes, Part II'. ‘Jottings' appears to define the first and third as a sort of door, a conversation space where utterances are made as if matters of knowledge. In reading the collection, I felt that ‘Jottings' was led up to and led to ètudes II–not to state the obvious, but to say that the driver of the collection may be ‘Jottings'.

…Desire is the return to sunlight
as a wholey hidden language against the chill wall
able to let the paintwork shine.
('The Museum of Space–ètudes, Part I: ‘Nearness')

In sleep we try to find a way to talk to the parts of ourselves that don't talk.
(Jottings and Other Poems: ‘Jottings I')

is speaking through this inwardness?

What wound would you cover

with such fine linen?

What skies before the sky

are mirrored in reds and violets

Such a reading of the collection suggests that its movement calls to attention an attempt to connect the kinds of daily observations we often feel sure of at first as a short music lesson (ètudes, Part I); now considered meaningfully as jottings (Jottings), transform upon review into questions that revisit the musical exercises (ètudes, Part II).

Museum of space is clearly a beautiful insistence and outpouring of reachings to get a hold on, not necessarily the whole universe, but the small spaces that are captured and held, kept for reflection in expanding and contracting repositories. (Jordie Albiston's masterful use of space as human reduction comes to mind.) No grand philosophical statements appear to be sought after nor longed for here. Boyle's words are appreciative, communicative of what is observed. His expression belies a preference for the simply-expressed.

… Collapsed corridors linking childhood to a locked drawer in an abandoned filing cupboard gathering authority from its years under water. How the noise the wind makes in the trees alters subtly over a lifetime. Handing on wisdom in the usual ways. Why the sky is blue.
('These Autumn Days')

His language distinctly shows his influences as a translator, in particular of South American poetry in Spanish–types of expression as well as their means of expression. Sometimes it seems that Boyle is writing in English as if it were not his first language, on purpose. Perhaps this comes from the time-consuming perusal to form a precision of the expressions of others. So we find: ‘When flowers open on a day filled with sand all the water in the world will not quench their thirst' and ‘We cannot name sandgrains or some mountains but perhaps they can name us' ('Some Mountains'). There is, in any case, a sense of a conscious effort to aim for the simplicity he describes in ‘Of Poetry': ‘Great poems are often extraordinarily simple'. The book raises its point early and continues as a long ‘wave' to relish the ride in these odes to poetry.

One thing bothers me, though. In my reading of the collection, I found a niggling discrepancy between what seems to be a motivation towards ‘inwardness'–the expression of experiences of unprovoked ‘pure eloquence' ('Rain at Midnight')–sufficiently self-consciousness to favour a distinctly argumentative tone over the meditative. To my way of thinking, it is open to many doubts to speak of poetry as work ‘coming directly from the unconscious' (as Gomes says on the jacket of the book). I am therefore inclined to take these poems as self-conscious reveries to all things we take to be poetic; in this case, mainly the natural occurrence of things–shadows, twilight, the moon.

… The little bird, the piper of rain,

perched on a trembling branch

Boyle's poems search to confirm and reaffirm a desire to pin down (but not too hopefully so) the accuracy of moments. He seems conscientious of recording the firming-up of what's been seen and heard–a sense of amazement at the instance of the particular. There is always a feeling that he is actively looking out, always addressing someone else. He creates spaces for us (readers) to enter where we are often the ‘you' taken on tour. We are at windows, eavesdropping on ‘soundscraps' ('The Book of Questions–Reading Edmond Jabès').

His self-conscious guilelessness is used, to effect, to handle propositions about ‘space'–notably so in ‘Memories (for Victor Martinez Parada)' and in enunciating his aphorisms, chiefly in ‘Jottings'. He surprises, too–talking on behalf of unicorns and trying to ‘write outside of the human in all sorts of directions'. I'm not sure about this. One could say, that is not possible. Humans can only see as humans seeing. And Boyle seems happy enough to pretend to be the moon: ‘My cratered eyes would guide me through space' ('In Response to a Critic's Call for Tighter Editing').

The most important poem, for me, in the collection is ‘Apologising to Unicorns'. It brought to mind the idea that we give little thought to the fact that children are allowed to hold true (in order to encourage their speech development) that the moon, bears, tables and trees have the talent of (human) speech and (apparently) exercise this. While, as adults, we are especially discouraged against hearing such speech, except where we accept this as not true. Boyle takes on board a significant space about conversation and speech in his Unicorn poem–the question of the legitimacy of speech: ‘To find a unicorn in a forest is like falling asleep in English and waking up fluent in Pashtun'. For, Boyle adds to the point of speech by the ‘others', the ability of the ‘we' to speak like them and, so, ourselves without analysis.

This entry was posted in BOOK REVIEWS and tagged Bev Braune, Peter Boyle. Bookmark the permalink.