Translated from the Spanish into the English by Torin Jensen

A body in its passerine excellence looked at me. I didn’t notice right away. It takes time to know what in reality has been passing. And so we’ve written letters, long ones and fun ones, others that confess unmentionable things. And for all we’ve said in them I don’t know your house, you don’t know mine, and you’re several countries away. At least we fit within the illusion that we’re “Latin Americans,” that “we come from immigrants who had wanted to return home.” Anyway, you’re so far away the only time we went to your country we flew over the snow-capped Andes. I had read what you’d said about that mountain range, but it’s true that to see it and be seen by it was something else. So it’s exactly where you understand the price you pay for distance. On a map you’re a horse and I’m a mare, the two of us are the same color, nearly the same size and by a whim of mine we are apparently the size of the country where we we’re born. We’re separated meridians that I’ve painted in blue and white in memory of the sky and the clouds (that you transformed on the page) and if you add up our drawn bodies, if we stretch them out on the map, we would close the distance between our countries (on the map). A verbal measure that exists between wanting and talking and living to want to talk, of seas and nothing, of pasts and of everything. So we’ll speak tomorrow with uncertainty but with a full mouth. Dying daily, drawing and writing nonsense. For the other side of the map measures the still bird, the one I said looked at me. So this theory goes, my infinite friend. It serves as no more than a letter, but it isn’t a letter, it doesn’t negate the distance. It’s nonsense, but it’s the only home where you and I find each other. 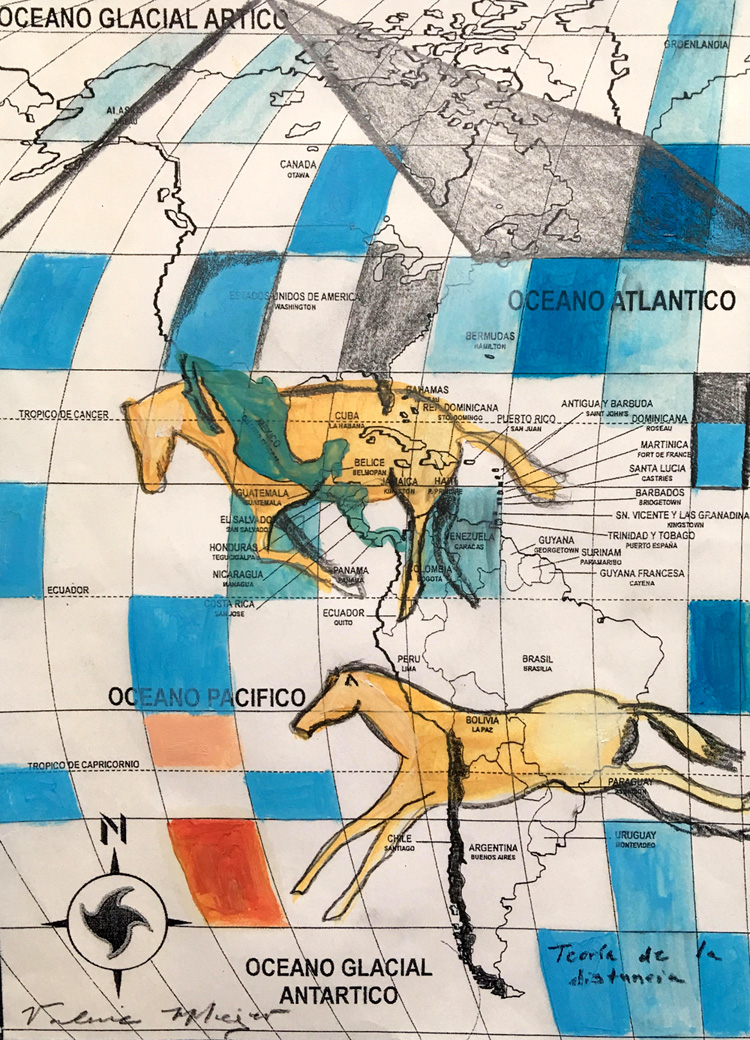 This entry was posted in 77: EXPLODE and tagged Torin Jensen, Valerie Mejer Caso. Bookmark the permalink.
Valerie Mejer Caso was born in Mexico City. Her complete collection in the US includes Rain of the Future (Action Books, 2015) and This Blue Novel (Action Books, 2016), longlisted for the best translated book of poetry by ALTA this 2016. She was the recipient of the Gerardo Diego International Poetry Award and of three grants given by The National Council for Culture and the Arts in Mexico. She has collaborated as a painter with poets Raúl Zurita, Forrest Gander and Antonio Prete and as a poet with photographers Dan Borris, Russel Monk and Barry Shapiro. She has been translated to English, Slovenian and Portuguese.


More by Valerie Mejer Caso on Cordite Poetry Review →
Torin Jensen is a poet and translator living in Washington, DC. A graduate of the MFA program at Boise State University, where he coordinated the MFA Reading Series, he is the co-publisher of Goodmorning Menagerie Press. His work has appeared in a number of journals including Mandorla, Circumference, SP CE, Asymptote, MAKE Magazine. He is the author of the chapbook Phase-sponge [ ] the keep (Solar Luxuriance 2014).