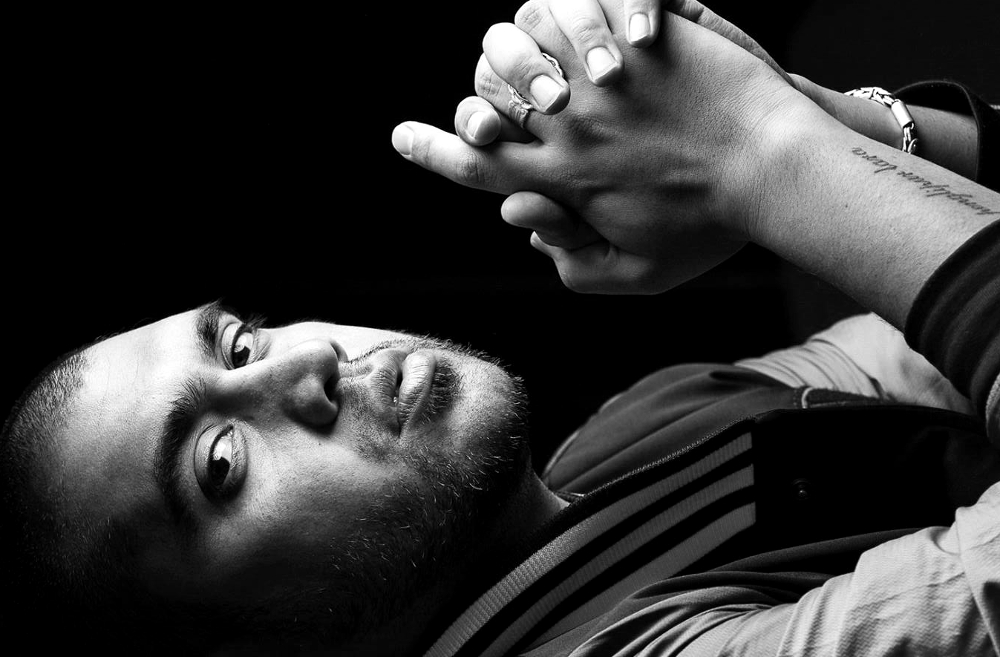 Omar Musa’s debut novel Here Come the Dogs was swiftly met with critical acclaim, even long-listed for the Miles Franklin award, after its publication in 2014. Praised for its searing language and smooth slippages between poetry and prose, Here Come the Dogs simmers and seethes above a burner of references to Australia’s thriving hip hop culture – its artists, lyrics, language and debates – a culture Musa himself is deeply involved in. Musa, an Australian-Malaysian multidisciplinary artist has previously published two books of poetry, The Clocks and Parang, as well as released multiple hip hop albums and performed internationally on slam poetry stages, including TEDx at the Sydney Opera House. Two years after Here Come the Dogs, we’ve now witnessed the release of Musa’s EP Dead Centre and his return to the hip hop stage. Musa’s hip hop lyricism is no less crafted than the poetry he’s penned. Performing and publishing across a range of artistic mediums, the threads connecting Musa’s oeuvre are strong: searing political commentary, disenfranchised and displaced youth, passion for art in all of its varied forms, and always a solid sense of self.

During his tour for the EP, Musa made a stop just down the road from his hometown of Queanbeyan to appear on a panel at the Canberra Writers Festival. After the panel, I arrived at Musa’s table in time to see him reach into a bag and pull out a stack of his new CDs and place them on the table for sale. ‘I don’t know if I’m allowed to do this, but I figure I can give it a go’ he said. Much like his art, Musa shifts and grooves between the personas of rapper, novelist and poet.

Hannah Hall: While it’s common for a lot of rappers to adopt a stage name, you’ve opted to retain your given name across all artistic mediums. I’m curious to know, is there a different personality behind each genre? Is Omar, the rapper on stage, the same as the Omar who sat down and wrote Here Come the Dogs?

Omar Musa: I decided not to adopt a stage name because I just couldn’t think of one, a good one. I never really had a nickname outside of OBM – you know, everyone for time immemorial has called me OBM. In the early days, for maybe six months, I called myself ‘mata singa’, which meant ‘eyes of the lion’ in Malay, but the reason why I kept my real name is because I want to be honest; this is all me. I’ve got many different facets to my personality and I’m always striving to figure out how to present them in different mediums. Honest emotional connection with audiences, readers and viewers is such a potent part of art and I want it to be all me. I mean, do I have a persona on stage? Of course. If you’re getting up in front of 500 people that you’ve never met before you’ve got to really amp yourself up for that. It’s not going to be the same Omar that’s hiding away in his room meticulously picking through the language that he’s put down on the page for a book. They’re all just different sides of my personality, you know, I’ve always had big ups and downs but I’ve also always been drawn to artists who unashamedly present those different aspects of their personality to the world, warts and all.

HH: Do you find that there are different facets for different genres? Is one better suited than the other, or does it vary?

OM: It depends on what mood I’m in. People think of hip hop as a very angry art form and in many ways that’s true – there is a certain type of danger and aggression – but there’s also a coolness and a funkiness from back where the breakbeats started. I was drawn to its ability to allow you to let free the tempestuous emotions within you, whether they be anger or pain. All of us have those emotions and feelings within us and there was something about the chunky, bodily beats of hip hop that drew me into expressing myself in that way. Then again, people have said that my fiction is quite ferocious and fierce in its own way and I’ve also got songs that are very contemplative and low key, so it’s really hard to say. It depends what kind of mood you’re in, but I do think that hip hop lends itself into something pretty fiery.

HH: Across all of these mediums, you are a storyteller. On your new EP, Dead Centre, this comes across particularly strong in the ‘The Fisherman Song’. How did you come to shape this particular story into the form of song, rather than poem or novel?

OM: It came about in a very haphazard way, almost by pure luck. Joelistics, one of my producers, is always sending me new music, different ideas or skeletons of beats. Sometimes I respond immediately and others I can’t quite think of something. This was one of those samples that I just couldn’t think of anything. It was a type of northern Thai folk song and I couldn’t understand what the words meant, even after showing some Thai friends who didn’t know the dialect. I loved the beat, I just had no idea what to write over it. So it was quite late at night when I was sitting at my desk in Penang, Malaysia, on a writing residency when Joel suggested that I write a story over it. I lay down in bed and I was scrolling through my Facebook before I went to sleep and an article popped up from the New York Times about a young Thai man who’d gone drinking in a bar and got abducted into the illegal fishing trade. Apparently this happens all the time and a lot of the fish that we eat is fished from Southeast Asia by unpaid – basically slave – workers. So much of the world’s fish comes from this way; something that we consume almost every day, or every week, is based on massive exploitation. It’s on our doorstep and we don’t even think about it.

After reading this I jumped out of bed – I knew. I knew straight away how this was going to work. I had an immediate vision of this man, basically because he had already told his story, and I was just poetically translating his story into song form. I wanted to humanise this story. I knew how I would structure it: it would start with the ocean in a thousand pieces and his heart in a thousand pieces, and that I would leave the story is hanging in the air. There’s progression, yes he’s in a better spot than when he was on the boat, but he’s still leading an unresolved and unhappy life. It happened very quickly. I said to my friend Cole Bennetts, a great photographer, ‘record this, I’m going to write a song’ and so we’ve got it all on record. I was sort of bleary-eyed and in my glasses and a sarong and I wrote it out. I did go back and fine-tune and change the flow in tiny spots. Particularly, the second half of the second verse, I speed up to raise the tension:

But, really, that song was just an immediate response to that stimuli of the article and, you know, I love writing stories – people tell me that’s where my strength lies – but I didn’t want it to be just like every song. I mean, every song must have a story, but not necessarily a straight up narrative in a fictive way that you might find in a book. It’s interesting because so many people say that my fiction has a certain cadence and even a hip hop rhythm – I’m not sure about that, but it definitely sometimes has a spoken word-type rhythm because I’ll play with assonance and alliteration in a way that a rapper might. Then again, my hip hop has come to be influenced very heavily by my fiction and some of the sculpting and long hours of though that go into creating fiction. It’s all about balancing that frenzy of creative energy and a cool-headedness to find out what the perfect vessel is for these words.

Pages: 1 2 3 4
This entry was posted in INTERVIEWS and tagged Hannah Hall, Omar Musa. Bookmark the permalink.
Hannah Hall lives in Geelong where she is completing her studies at Deakin University in Literary Studies and Children’s Literature. She is an emerging freelance writer, focusing on creative non-fiction and prose.


More by Hannah Hall on Cordite Poetry Review →
Omar Musa is a rapper and poet from Queanbeyan, Australia. He has won numerous awards for poetry and music, including the Australian Poetry Slam and the Indian Ocean Poetry Slam. He has released a book of poetry and two hip-hop albums recorded in the USA and has toured throughout Asia, Europe and Australia, doing writers festivals and hip-hop shows, including tour support for Gil Scott-Heron in Germany.