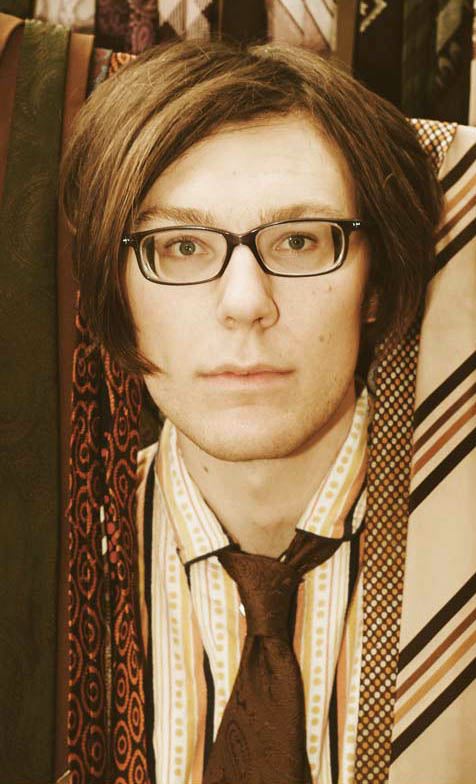 Justin Heazlewood writes regularly for BMA and Voiceworks. He is, however, better known for his role as Triple J's “Bedroom Philosopher,” a character he continued to develop at the recent Melbourne Comedy Festival. Here he talks to Benny Walter about his comedy in depth.

How does comedy fit into your overall writing?

Justin: Well I think ever since Primary School probably, everything I wrote had a sort of comedy element to it-I always loved being witty and playing around with words and being a bit silly and breaking rules and it just sort of always stayed with me-especially as a musician. I've got a whole heap of serious songs as well, but no matter how big the crowd is you never get much feedback on them. But getting the feedback of someone laughing at what you do is really addictive.

How do you think that relates to when you are making serious observations about something?

Justin: Yeah-I guess the line sort of wavers a lot-I guess it's your own opinion of comedy. I wrote a column about how I went back to Canberra and I couldn't go back into my old workplace cause I was too sort of depressed or whatever and I knew everyone would be there going “How's Sydney, how's Sydney?” doing this whole “oh, you've left Canberra now, you're up in Sydney-you're too good for us now” sort of thing. What a trivial thing to write about-in this age, you read newspapers and stuff and it's all these big, huge, general kind of heavy articles-I like to kind of get into the nooks and crannies of humanity. I guess that's why songs like Golden Gaytime are always really popular cause it's about the thing-like buying a Golden Gaytime icecream you feel a bit silly.

How do you find people are coming up and talking about it afterwards?

Justin: It's interesting, with this comedy festival [in Hobart] I got the impression that I'm the artist that people avoid afterwards-with other comedians they are themselves as well, they're sort of pleasant and friendly, but the longer this festival goes on, the weirder I find I'm getting, and I'm concentrating more on the Bedroom Philosopher being a character. I find I'm getting a bit darker-for example, doing stuff about my Dad and him buggering off when I was really little-I guess it's in part that I really admire Andy Kaufman as a comedian-he always seemed to want to freak the audiences out in a way, and in my own way I think I want to do that as well.

That must be pretty difficult in conversation afterwards I suppose …

Justin: Yeah, I spend the whole set talking about how awkward I am, and how nervous and shy and weird, and so then when I get off people must see me lurking in a corner and go, yeah, he really is like that. But the ultimate irony is-I'm trying to turn your ultimate disadvantage – being a bit socially awkward or whatever – I'm broadcasting it on stage, which is a really weird phenomenon. I'm turning it into a joke in itself. I guess I'm trying to self-defeat my own insecurities by dragging them up on stage kicking and screaming and going no, look, we're going to hold you up in front of the light and just show me and the audience how silly you really are.

Do you think that's something that is sustainable for the longer term-you think there's a danger of falling in to, that's who you have to be?

Justin: I guess that's the advantage of not being Justin Heazlewood up there but being the Bedroom Philosopher-I'm sorta finding out who he exactly is and what makes him, him. I guess there's a danger of having to outdo yourself or being more strange each time people see you, and what if you just can't do that anymore? But I guess-I've just got an overall, grand confidence that it's worked out so well until now, so-why would it stop now?

How did your Triple J gig happen?

Justin: Through a thing called Heywire-the ABC regional youth radio competition. Canberra was a regional area and I did a 3 minute piece on how everyone was into techno at uni and no-one wanted to come to our folk gigs-it was a foot in the door and I approached the producer of the Morning Show and said I've got all these songs, what can I do.

Did that feel just part of the continuum of what you had been doing, or did it feel like an enormous step because you suddenly had a much wider audience?

Justin: Yeah, I spose it was-I do like to think that over the years I've kept going up by levels of success, I guess it was good timing. By the time it came around I really felt-in a situation where I had to write one song a week, and they were only going to keep the segment going as long as I could keep writing songs, and as long as they were of the same quality as the early ones, and I guess it was the first year I was out of uni, so I had this amazing overactive brain, going “What the hell am I doing now I'm not in uni, oh my God, school's over” and I guess it came at just the right time. I was in just the right frame of mind to work on it wholeheartedly. It was just one of those moments where it was just timing, it was all about timing really, and I was just in the right place to do it.

What brought the segment to a close?

Justin: Well, it got to the end of December 2002 and they were going on holiday anyway, and I had pretty much exhausted myself. And then, the next year-I didn't really have any more songs, I couldn't keep up one song a week at all-I tried pitching various other ideas-but it just never really happened. So last year, I did four little philosophical vox pops-next year I'm going to try and pitch something more regular again and see what I can get.

Any thoughts so far?

Justin: I'm thinking maybe just a little Bedroom Philosopher, maybe 5 minutes once a week, maybe one week I do a song, one week I read one of my columns maybe, or have a little bit of a rant, or one week I just interview someone of the street – maybe give it a bit of variety? I guess I'm sort of filling the Sandman void in a way.

Benny Walter writes in the Orwellian tradition – he washes dishes to survive. He is eating a lot of peanut butter and cheese at the moment, but not together. This article first appeared in Togatus. Image by Alan Moyle of Photobat. Listen to an audio poem by Justin Heazlewood in Cordite.

This entry was posted in GUNCOTTON and tagged Justin Heazlewood. Bookmark the permalink.