Lost Venues, Long Nights: An Introduction to Historical Maps of Live Music in Sydney and Melbourne 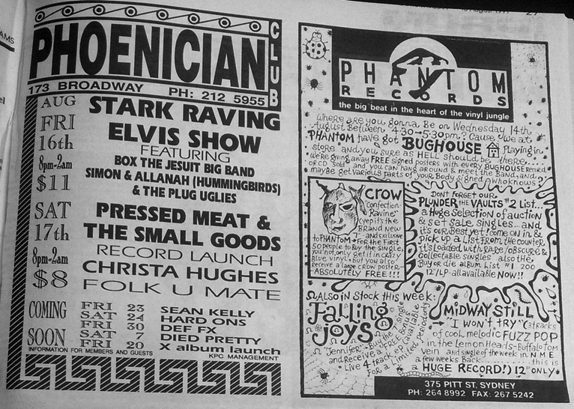 As with many other industries, live music in Australia has undergone a form of restructuring. Much of this occurred during the 1990s, though it wasn’t so obvious at the time and there were plenty of other interesting things happening, often within stumbling distance of one’s affordable inner-city rental accommodation. As an introduction to this story of change felt in place, over time, this article discusses changes to live music in Australian cities between the 1980s and the 2000s, transitioning from an industry heyday of sorts, towards a more familiar landscape of organised activism focused on saving inner-city music venues (see, for example: Faulkner 2013; Homan 2011; Levin 2014). The starting point for discussion is a set of maps and figures derived from gig listings in Melbourne and Sydney in three respective sample years, forming a necessarily brief but novel ‘forest through the trees’ perspective on long-range change.

Among the map data are some venue names from the past which may be familiar or surprising to readers, depending on the time frame in which they went out the most. But beyond the bricks and mortar of the venues – and one can, in several cases, ‘buy a brick’ to save a particular venue – the data also speak to the human geography of music, and, to borrow a useful phrase, its ‘lost geographies of power’ (Allen 2003). Over the years there has been no decline in the number of performers, or even music venues, in Sydney or Melbourne. The changes are more spatial. They trend towards the diminishing role of organisational oligarchs but also the spatial agglomeration of gigs and musicians, a map writ large by the collective web of ‘spatial leashes’ which accompany DIY creative work.

The maps presented in this article derive from a wider research project in progress by the author. They are based on gig listings (published listings for forthcoming live music events) from the same week in three separate years (1983, 1994, 2006), in both Melbourne and Sydney. The gig listings have been compiled into an historical Geographic Information System (historical GIS). The structure of the historical GIS allows maps to be generated on live music distribution in different cities and timeframes, as well as enabling summaries of the number of different bands, or calculation of the distance between venues and gigs.

In these particular maps the larger symbols represent venues with more individual gigs in the respective time frames, found in either the Rock, Jazz or Folk sections of the relevant publications. As with the wider research project, earlier years rely more on Fairfax publications (The Age and Sydney Morning Herald), while in the 1990s this transitions to street press (Beat and Drum Media). The wider research project uses more sample years and sources, but the overall trends are consistent with the abridged results presented here.

The maps and figures presented here do not indicate any long-term decline in the number of live music performances (‘gigs’), nor in the number of bands, between the early 1980s in either Melbourne or Sydney. What they do point towards is spatially tempered expansion. In these samples the spatial variation of gigs (represented in the ‘Average distance between gigs’ figure, and in the visual clustering in the maps) declines over time, while the number of performers increases. For better or worse, live music scenes now survive with more performers, performing less often, and in a smaller area.

This pattern is stronger and starts earlier in Melbourne than in Sydney. This isn’t actually inconsistent with recent positive reports of the aggregate strength of Melbourne’s live music scene (Boulton 2013; Music Victoria 2012), nor with reports of its live music venues being under threat (Doman 2014; Levin 2010b). Rather, it highlights the human geography already present in existing accounts, but often lost in focusing on particular venues or on aggregate activity.

In the Melbourne samples, the number of performers nearly trebles across 1983, 1994 and 2006: from 266, to 411, to 738. The number of gigs also increases, but not in proportion with the number of performers. Meanwhile, the average distance between gigs shrinks considerably: 336m, 189m, 85m. Further, at each sample, Fitzroy, the CBD, and St Kilda (read: The Esplanade) made up an increasingly large proportion of the live music listings. Even inner-city areas such as South Melbourne, Richmond and South Yarra decline in activity or vanish from the data. This particular (Liberal-oriented) inner-city hollowing out is consistent with maps of independent arts and music venues presented by Kate Shaw (2013). The suburban shrinkage is the other side of this equation – this slunk quietly off stage with no help from gentrification.

While Melbourne live music experienced this spatially tempered expansion in the 1990s, Sydney was entering a well-documented decennium horribilis. By the late 1990s even the unofficial home-town booster band, The Whitlams, was singing (sadly) about their hometown more than in it. Speaking on radio in 1997, lead singer Tim Freedman commented that Melbourne had ‘a bigger sense of community, in pubs and being part of a crowd’, while inner-city Sydney had been ‘scattered to the wind’ (‘Australian Music Show’, Triple J, 3 September 1997, quoted in Carroll & Connor 2000). In addition, a variety of contemporary accounts point to a negative feeling in Sydney live music in the 1990s, depicting the city as a tough place to get a gig or find a friend (Ausmusic 1993; Carroll & Connell 2000; Casimir 1990; Holmes 1993; Homan 2000; Johnson & Homan 2003). In the same time frame, property prices trebled (O’Neill & McGuirk 2002).

Again, the data presented in the maps above is not inconsistent with existing accounts, but adds nuance. The Sydney data does not indicate a drop in gig numbers or performer numbers in the 1990s, but there is a plateau in both, as well as a lack of inner-city clustering (either visible in the maps, or measurable in the average distance figure), which contrasts with Melbourne. This lack of inner-city clustering occurs along with the loss of the ring of suburban venues, a prominent feature in the 1983 Sydney map.

Further, of the Sydney venues with the most listings in the 1994 sample, several are fancier and higher-capacity venues, not suited for musicians starting out. And unlike in Melbourne, the list of 2006 top-listing venues is completely different to 1994. Thus, the negative reports of Sydney’s live music in the 1990s are related less to overall numbers of venues or gigs, than to lack of spatial consolidation – the feature which, for better and worse, characterised the survival of Melbourne live music through the same decade. But by 2006 Sydney live music can be seen making a recovery along the same lines as Melbourne: greater clustering, and loss of suburban circuits.

Of course, musicians have always navigated different gatekeepers, obstacles and opportunities. These leave their traces in maps of the past, but require some translation. These final sections describe the differing norms for Australian musicians in two distinctive earlier eras, and can help give context to the maps and figures presented above.

Pages: 1 2 3 4
This entry was posted in ESSAYS and tagged Bon Scott, Justin Heazlewood, Kirsty Stegwazi, Sarah Taylor. Bookmark the permalink.
Sarah Taylor is a PhD candidate in the School of Maths and Geospatial Sciences, RMIT University, Melbourne. Her research focuses on the historical human geography of live music in Sydney and Melbourne. A specialist in Geographic Information Systems (GIS), she also holds a Cultural Studies degree and has performed with music group the Taylor Project since 2006. Her PhD is due for completion in June 2015.

8 Responses to Lost Venues, Long Nights: An Introduction to Historical Maps of Live Music in Sydney and Melbourne