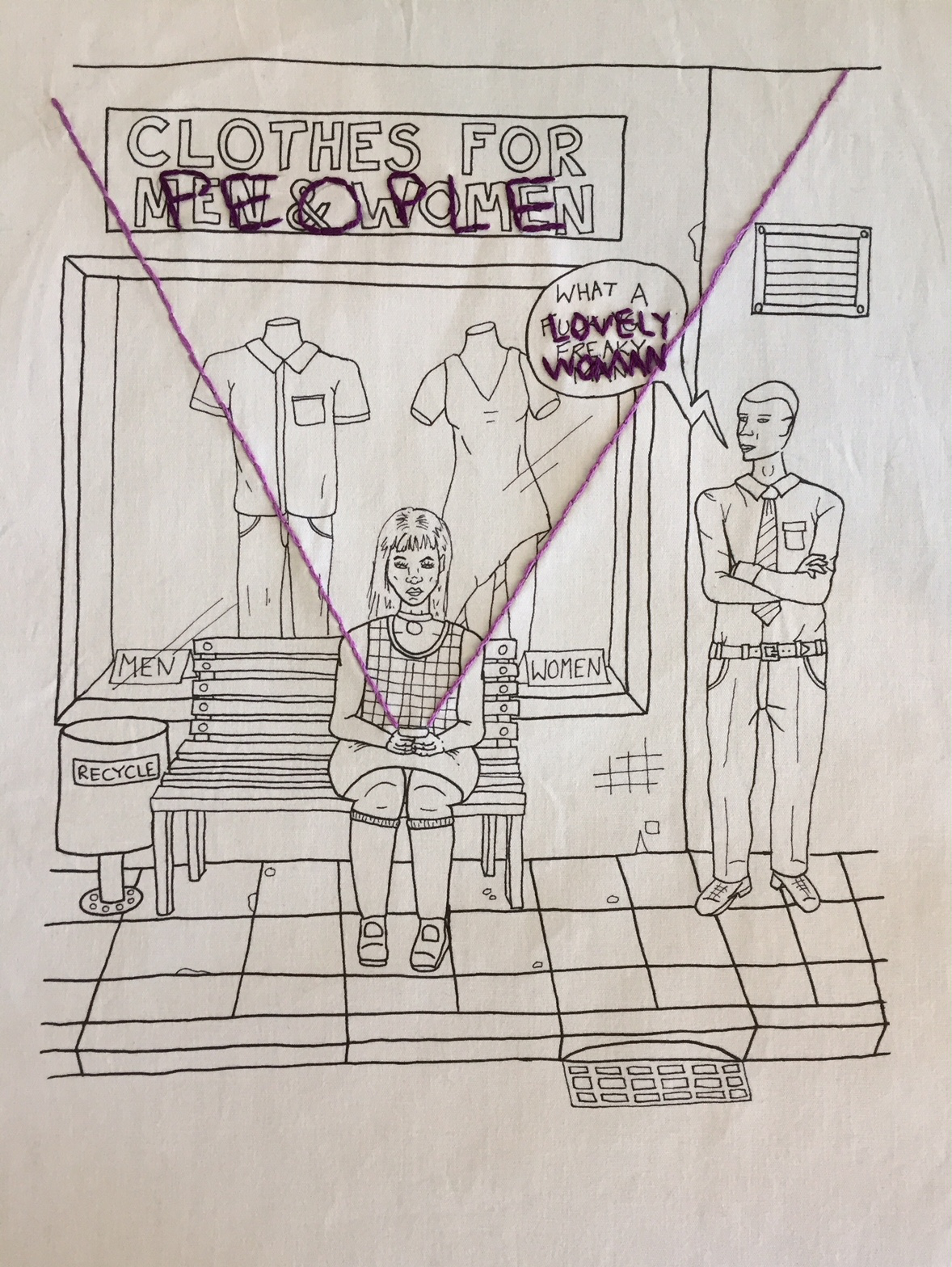 The adjoining artwork depicts a phone lying on the ground asking the user to ‘rate Trans Shield.’ Beside the dropped phone is an outstretched hand, wrist tattooed with the transgender symbol. There are droplets on the ground that could be dismissed as rain or spilled coffee, but when embroidered in red their origin is apparent: these marks are blood. The floor lines suggest bathroom tiles, potentially invoking the heightened risk of self-harm, or the risk to trans folk of being harassed or attacked in gender-segregated public bathrooms. A trans person has been injured, possibly killed, and this cannot and should not be ignored. Here the app has not been able to change the violence that occurs in society towards trans and gender diverse folk. Whatever the augmented reality overlaid, people are still subject to harm and violence in the world.

In Part 4, the final section of this poem, an app update is mentioned concerning the ‘sister app / Be Fucking Nicer.’ Once again humour infuses the first stanza, with an ally’s use of the app in storing ‘people’s pronouns and / identities for future / social interactions’ also parodied as ‘gamified education / tools (such as Ally / Credit Cookies).’ This app is shown to be marketed towards wider society and uses black humour to point to the way that ‘being fucking nicer’ has to be gamified and incentivised in order to be adopted by cisgender people.

The next stanza expands upon this, explaining that ‘the app was taken / down’ due to no longer meeting the Terms of Service; in lines of legalese, the reasoning is that ‘the apps are not allowed to unduly / influence the minds and decisions / of cisgender people’ ‘in this / day-and-age of ‘full / equality.’’ These lines sarcastically invoke the self-satisfied complacency of mainstream Australian culture and parts of the LGBTQIA+ community after the legislation of Australian marriage equality. In his piece ‘I Can’t Stop Crying: After Yes,’ researcher and writer Quinn Eades discusses how, despite Australian marriage equality, there is still so much work left to do for those within our LGBTQIA+ communities. He asks us to think about ‘what keeps happening after yes.’ In ‘Do more, do better’ we are asked to contemplate the fullness and completeness of utopic equality, and how we should be always striving for inclusivity, for safety, and for the well-being of all people.

The last lines of the poem echo the title’s call to action: ‘Do more, do better.’ Perhaps apps like these would not be our cynical dystopia if we were just goddamn good to one another. Honestly, as a trans person I’m so tired of the discrimination and the fear, and I’m scared for both myself and my gender diverse siblings. The final line pleads to us, to everyone, to be better to transgender, non-binary and gender diverse people, so we can embrace diversity and create a decent world without needing shields.

Pages: 1 2 3 4
This entry was posted in ESSAYS and tagged Keira Edwards-Huolohan, Rae White. Bookmark the permalink.
Rae White is a non-binary poet and writer living in Brisbane. Their manuscript Milk Teeth won the 2017 Arts Queensland Thomas Shapcott Poetry Prize and will be published by the University of Queensland Press in September 2018. Their poem ‘what even r u?’ placed second in the 2017 Overland Judith Wright Poetry Prize. Their poetry has been published in Meanjin Quarterly, Cordite Poetry Review, Overland, Rabbit and others.


More by Rae White on Cordite Poetry Review →
Keira Edwards-Huolohan creates art and writing about gender, mental health and social issues. You will find them hanging out in plant or book shops, covered in cat glitter and avoiding eye contact.