Seeing Leftwich ‘s markings, without knowing their source, tipped me into action. Within a short time, I was attempting all sorts of handwriting experiments, making Chinese and pseudo-Chinese characters with brush and ink, writing freestyle marker pen characters via Hangul and reworking the doodles I made when talking on the phone. An assortment of these was published in my book writing (xPress(ed), 2004). Leftwich taught me the word asemic, which led to me publishing Asemic magazine, and writing essays about the slippery area of asemic writing. I had been infected with the kind of enthusiasm called for in the punk fanzine Sideburns #1 (1977), reproduced below, often misquoted as ‘Here are 3 chords. Now form a band.’ 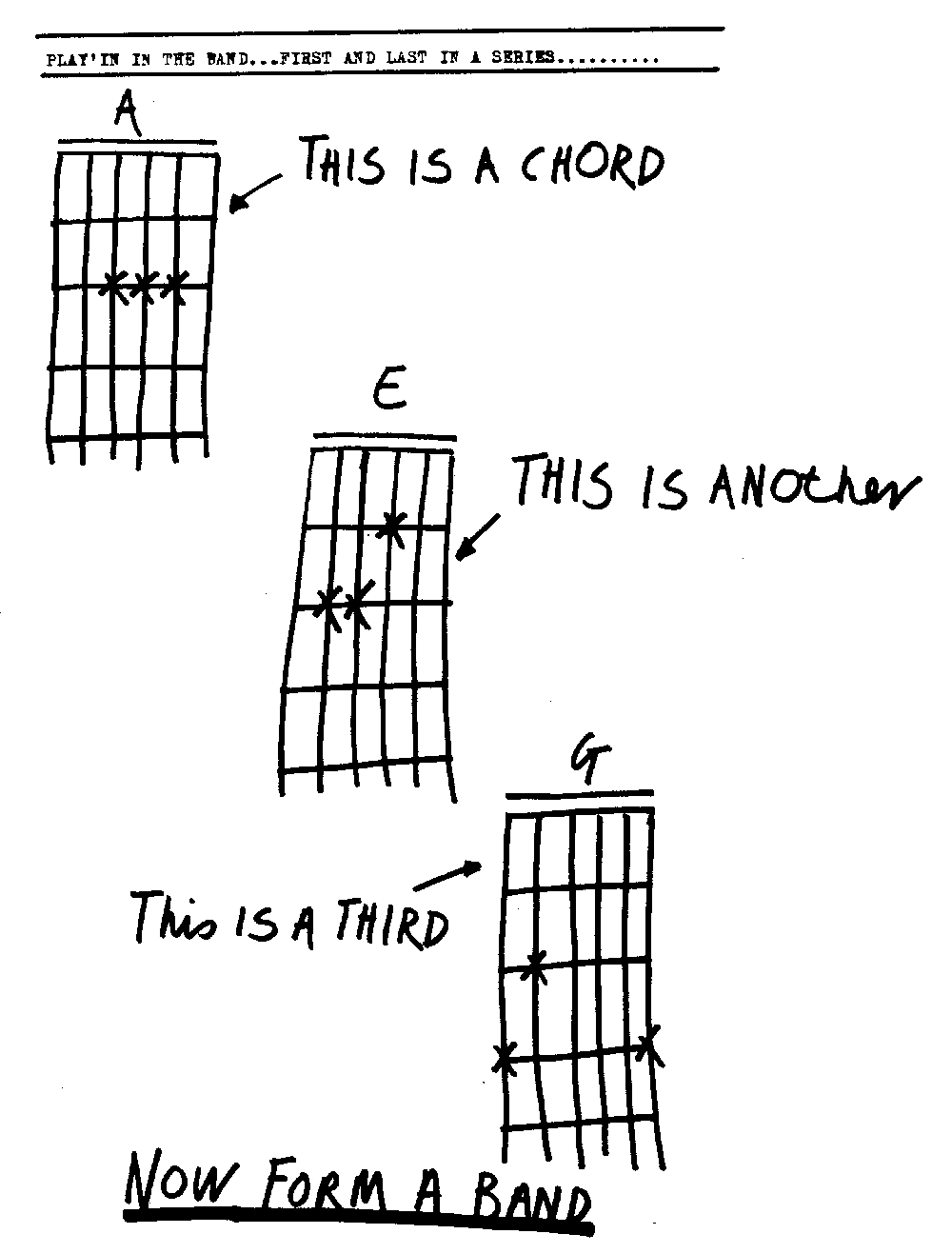 David Turgeon is an electronic musician rather than a punk. His Jardin botanique (Colosse, 2006) is a short graphic novel comprised of what appear to be pencil scribbles contained in roughly sketched comics frames, and with a vague resemblance to plant forms. I can feel rhythm and energy on the pages, completely unlike the flat experience of reading text in Times Roman. Haptics: A Novel (Xerolage, 2013) by Stephen Vincent is a 24-page sequence of space-filling scribbles done while listening to recorded and live music, or visiting the wilderness. The overall form of many of the scribbled conglomerates reminds me of the organic abstract shapes that Hans / Jean Arp drew. Vincent’s handiwork looks to have been made with a thin, black marker pen, and resembles drawing more than writing. He seems to have been in a slow-moving, meditative state, rather than the state that produced the rapid scribbling in Turgeon’s book.

Steven J Fowler’s Selected Scribbling and Scrawling (ZimZalla, 2018) is a collection of what Fowler calls ‘scrawlpoems, scribblepoems, asemic poems, pansemic poems, doodle poems and other messes’. His scribbliness is less extreme than some of the others listed above, and reminds me of handwritten visual poetry by the likes of Carlfriedrich Claus, Robert Corydon and Edgard Braga. Fowler takes handwriting for a run, and sometimes lets it off the leash. A collaboration between Christopher Stackhouse and John Keene, Seismosis (1913 Press, 2006), pairs Stackhouse’s delicate, complex scribbled drawings with a variety of experimental poetry styles by Keene. Keene is trying to put his friend’s shapes into words, approaching from several angles, from the formal to the lyrical. Certain lines in Stackhouse’s drawings give me an impression of three-dimensional paths being traced by electrical sparks.

Henri Michaux was famous as an explorer: both of his own psyche using substances, and as an experimenter in literature and art. He painted many pages of simple, almost pictographic compositions which have been called signes. Although Michaux visited Asia and studied Chinese writing systems, most of his brush writing experiments feel more personal than Asian. Prehistoric rock art was another of his interests, and was perhaps a stronger influence on the evolution of his signes than were Chinese characters. I remember seeing his ‘Mouvements’ (republished in Face aux verrous, Gallimard, 1992, but first published in 1951) for the first time, and wondering what they were. Dancing critters and people in motion drawn with a minimum number of rough brush strokes, or were some of them partially written Chinese characters? Along with Leftwich’s, these images inspired me to pursue a basic, first principle approach to Chinese brush use.

Even harder to locate geographically is Mirtha Dermisache’s oeuvre. Beginning in the 1960s, Dermisache made a variety of abstractions of writing, ranging in style from rawly scribbled to carefully placed strokes. Below shows an atypical, extremely rushed piece. When film-maker Hugo Santiago showed Dermisache’s work to Roland Barthes, the latter wrote her a letter in 1971 that began a productive friendship. Throughout her career, Dermisache was integrated more deeply into the visual art milieu than the literary. However, a recently published collection of her older creations, Selected Writings (Siglio/Ugly Duckling Presse, 2018), might change that. She seems to be reaching for a kind of meta-writing, forms which give an impression of writing, without allowing you to read words. Roland Barthes produced some writing-like drawings, some of them described as ‘contre-écritures’, counter-writings. A few of the examples published in Luna-Park #2 (1977), an issue subtitled graphies, could be described as spidery or twitchy pencil marks, poking around the edges of being writing. Several of his drawings are in the collection of the Bibliothèque nationale de France.