Private David Jones’s In Parenthesis and The Anathemata 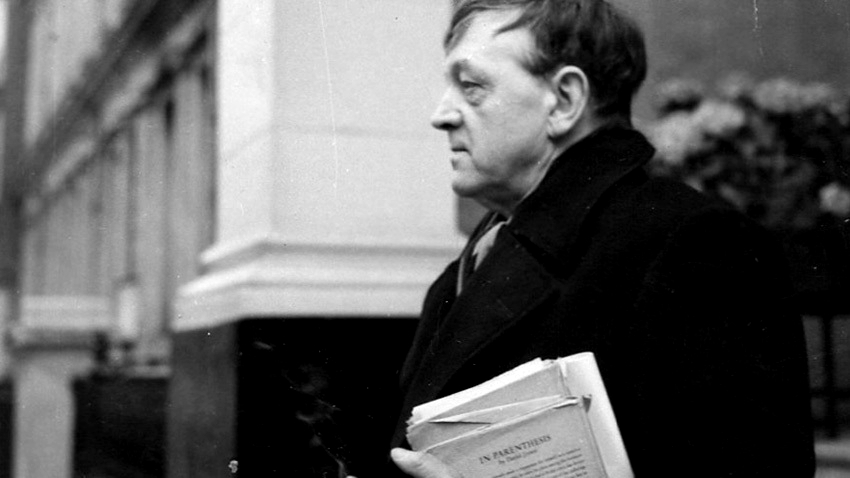 … it came as if a rigid beam if great weight flailed about his calves, caught from behind by ballista-baulk let fly or aft-beam slewed to clout gunnel-walker below below below.

He thought it disproportionate in its violence considering the fragility of us.

Shortly after midnight on 11 July, 1916, Private David Jones of the London-Welsh battalion of the Royal-Welsh Fusiliers was shot in the calf at the end of an operation attempting to drive the Germans out of Mametz Wood as part of the Battle of the Somme. He had spent much of the previous 24 hours engaged in heavy combat, in what was one of the bloodiest battles of World War One. The 38th (Welsh) Division lost a fifth of its men in the battle, 565 killed and 585 reported missing, presumed dead. Including Jones, there were another 2893 wounded. Crawling back through the wood, Jones moved through the bloodied corpses of close friends and acquaintances, garlanded by the flowers and foliage of Mametz. Jones would return to the front, and serve until the end of the war, but this battle would haunt him for the rest of his life – ‘my mind can’t be rid of it’ he said in 1971.

From it, Jones created the long poem In Parenthesis, which W H Auden called it ‘the greatest book about the First World War’, doing for the British and Germans ‘what Homer did for the Greeks and the Trojans’. Graham Greene called it ‘one of the great poems of the twentieth century’, and T S Eliot, in his introduction to the first edition was unequivocal – it is, he wrote, ‘a work of genius’.

Of Jones’s second great poem, The Anathemata, Auden was even more effusive, calling it ‘very probably the finest long poem written in English in this [twentieth] century’. For writers as diverse as Kathleen Raine, W S Merwin and Seamus Heaney, these poems, taken together, make Jones, in Merwin’s words, ‘one of the greatest twentieth century poets’. Dylan Thomas, not one to underplay his own talents, said ‘I would like to have done anything as good as David Jones has done’.

While it is as a poet I wish to explore Jones, he is also unique – William Blake, with whose work Jones grappled all his life, being perhaps the only other example – in having attained eminence as both a poet and a painter. Before the publication of In Parenthesis he was already regarded as ‘the most gifted of all the young British painters’ (Kenneth Clarke). For Jones, much to his initial surprise, the problems presented in creating a poem were of a piece with those of creating a painting, and led him to consider questions, and assay, in his own polite way, solutions, which remain as challenging now as they were when he was writing.

‘Bugger it, I can do better than that, I’m going to write a book.’

The story of Jones’s decision to write about the war – as recounted in Thomas Dilworth’s excellent new biography, David Jones, Engraver, Soldier, Painter, Poet – may be apocryphal, but it has a definite ring of truth. Jones had suffered from depression after the war ¬– what would now probably be diagnosed as shell shock. Already an established painter, having entered the Camberwell School of Arts and Crafts as a fourteen-year-old, he was struggling to make art, and struggling to live. A broken engagement with the daughter of his partial mentor Eric Gill had left him in a parlous state.

He read obsessively about the war, and claims that it was after reading All Quiet on the Western Front that he decided that all he had read

… exaggerated fear and calamity, failed to convey war as ‘like ordinary life … only more intensified’, failed to convey the sense of historical continuity that he and others had felt, and failed to show the ‘extreme tenderness of men in action to one another’. (DJ, 128)

For Jones, it was, as Dilworth notes, an ‘entirely aesthetic challenge’ and one that Jones, to his own fascination and possibly astonishment, presented similar problems to those he faced as a painter. Fundamentally, how was one to re-present a particular moment, either in words or in paint?

Jones worked on In Parenthesis for four years; 1137 foolscap pages of drafts survive, distilled down to the manuscript draft of 281 pages (DJ, 155). Among his models were the ‘Anna Livia Plurabelle’ section of Finnegans Wake; the Anabasis of St-John Perse; Gerard Manley Hopkins (in particular ‘The Wreck of the Deutschland’); Wuthering Heights and Moby Dick. Working on a series of engravings of ‘The Rime of the Ancient Mariner’ kept the mood of that work in his mind, while he disclosed correspondences between his fellow infantrymen and those of the Iliad, Shakespeare’s Henry V and, in particular, Malory’s Le Morte d’Arthur, which would remain the keystone text of his entire writing career.

The poem itself is in seven sections, each title page carrying a quotation from the early Welsh epic poem Y Gododdin, another model for the work. The poem mixes what Fiona Sampson has called ‘the disobedience of poetic form’ while at other times reverting, as the poem itself has it ‘to the discipline of prose’ (IP, 103). It mixes the allegorical with the demotic, although the latter is the preferred mode, incorporating a great deal of Cockney rhythm and phrasing – as Jones notes in the preface, ‘as Latin is to the church, so Cockney is to the army’.

It is a radical – and deliberate – departure from other poetry of the First World War. We are used to encountering war poetry – particularly in that of the Great War – as various types of anthems for doomed youth, elegies for young men (generally) whose lives were cut short, or who were sent mad, by a combat which can never be fully justified. Blame is apportioned. The futility of the exercise is highlighted. The similarities between us and those we call our enemies are drawn to our attention. And we are left to question what it is that drives humanity to such folly.