It is tomorrow where you are. There are record heatwaves and bushfires burning through the interior. Red-brown clouds of smoke where the woodlands smolder. Here, in Montreal, we are deep in snow. Deep in snow, I mutter out loud, tromping over Mont Royal: Deep in snow, eep in ow, e – i – o. Barely a syllable seems to rise above the drifts. 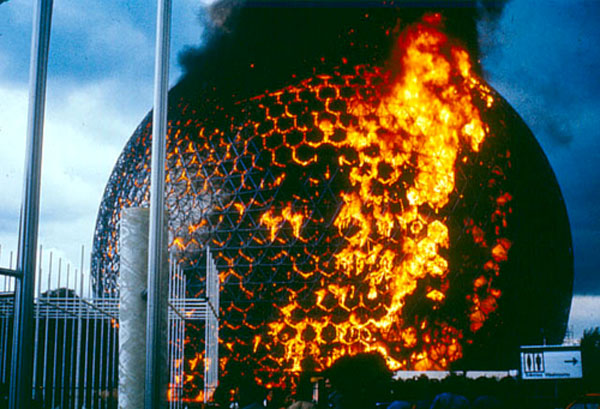 Montreal, Fire of the Biosphere

Which is not to say the time is silent. This afternoon there were demonstrations through the city’s streets in support of Idle No More, the indigenous-led movement against the Government of Canada’s insistent wholesaling of the land and its non-renewable resources. Idle No More’s interventions – in the form of round dances, drum circles, flash mobs, teach-ins, blockades – are going on all over the country, around government buildings, in shopping malls, over railroad tracks, at crossroads.

These occurrences run parallel to the poems we are curating, yet the larger scale structures of which they are part play a central role in these works. Here we come upon threads that connect the vast spaces between us.

One of my main orientations toward conceiving of a transpacific is to examine the relationship between poetics and politics. For years I’ve looked toward the Pacific, to a number of west coast poets to learn how one might further interfuse and complicate these practices. I am always interested to read how writers experiment with the languages of the commons – in content, in form, in compositional practice – and how they make their work more, to use a phrase from Lyn Hejinian, ‘rigorously social.’ In collaborative writing procedures, language appropriation, spatial compositions, meditations on the mobile (im)materialities of political economy, through small press work, in developing a public culture of readings and talks, and on-the-ground activisms, there exists a grand tradition of politically-engaged west coast poetics.

How this opens up across the Pacific is one of the major issues I want to pursue in this editing. In the work I’ve read thus far, the overlap of indigenous, colonial, and neoliberal rhetorics and histories is, for me, the most intriguing theme that pulls the strongest works together. Here, I am looking at the poems ‘ginen tidelands,’ ‘transpacific,’ and ‘A’ao.’ There are poems I open myself up to stutter into, ones with fast language cutting in at several angles, phonemic collisions that jam up my syntax, expand it. ‘No Movies,’ ‘Postcards from the Neon Cactus,’ ‘Carrion Upbringing’ and ‘Greater Kaohsiung Jaywalking Poem’ are a few of the finest instances. Then there are others, like ‘What What’ and ‘A Miniscule Map of the Country,’ that ventriloquize dominant rhetorics in attempts to turn them inside out.

‘I cannot fathom the Pacific,’ Susan Schultz wrote in her introduction to Pacific Poetries: Forms of an Ocean. I’ve enjoyed and learned so much from this project, from Schultz’s curations of Pacific poetries with Tinfish Press. It’s one of the main reasons I was so intrigued to take on this project: for an opportunity to read further afield, to experience where these poetries might lead.

I approach the curation of TRANSPACIFIC with a wish to entone Schultz’s statement: I cannot fathom the Pacific. I want to situate my role as co-editor in this unfathomability. My initial premises are to listen, to receive these poems and poetics, to tune myself to their attentions. From here, we can allow the works to map themselves onto the space we are collaborating to shape.

This entry was posted in ESSAYS and tagged Josephine Rowe, Michael Nardone. Bookmark the permalink.
Michael Nardone is managing editor of Amodern, and assistant editor of Jacket2. Two recent works – TRANSACTION RECORD and AIRPORT NOVEL – are available via Gauss PDF. He was co-editor, with Josephine Rowe, of the TRANSPACIFIC issue of the Cordite Poetry Review.