A Report From the Poetry & the Contemporary Symposium 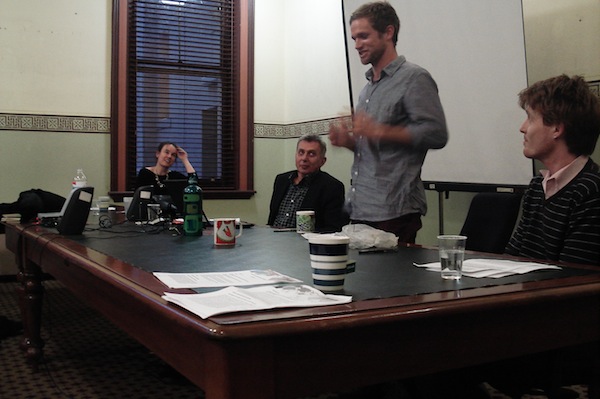 How to sum up the Poetry and the Contemporary Symposium held at Melbourne’s Trades Hall under the auspices of Deakin University – three days of esteemed, associated, unknown, expert, dilettante, crystalline, recondite, modest, bold and blusterous papers and events – without recovering the territory mapped by the abstracts still available online, the insider anecdotes, the fast gestating and ribald rumours, or the deserving hagiographies required to celebrate the combined poetic curatorship of organisers Ann Vickery and Michael Farrell?

poetics and future scenarios: poems and poets in an age of energy descent and climate chaos. mez breeze and the cyber-syntax of code poetry. towards comics poetry. stochastic acts: the search string as poetry. fact or fiction: mediatations on mary finger. grand parade launch. vishvarupa launch. roundtable: poetics of unimprovement. calculated enjambment: continuity and discontinuity of rhythm in august kleinzahler’s poetics. sonic ekphrasis from william carlos williams to jackson maclow. a brief poetics. this is what it sounds like: performance poetry beyond postmodernism. writing country: indigenous poetics and the open field.  “periphery”. an encounter with chen li’s ‘wooden fish ballad’ – as translated by chang fen-ling. voice, music, sound: poetic histories beyond the printed word. multi-tracking & ‘seeing on the retina’ in leslie scalapino’s pearl trilogy. alice notley’s contemporary mythopoetics. jacket and the worlding of australian poetry. alan brunton: charismatic absurdist. six types of experiment in new new zealand poetry. hidden in plain view: constructing the poems in starlight. durga, kali, sita, krishna and feminist identities in asian-australian poetics. there is no future, and the future is spanking. under the influence: leaving bloom behind. death and the poetics of teeming in yeow kai chai’s ‘memento mori’ poems. as the text bears witness: a reading of ‘es lebe der kong,’ prynne’s elegy to paul celan. eating and speaking launch. contemporary poetics and sapphic mythologies. give me vidas and razos: the life of troubadour technologies in the poetry of ted berrigan. entrepot poetics: john forbes’ critique of the contemporary. naming the voids of multiculturalism in ‘biral biral’: a new reading of the poetry of lionel fogarty. form and field in contemporary australian poetry. merely circulating: modern poetry and the status of document. things to do with perth. poetry as writing a vector. “australian poetry” and some reasons why we don’t need it. gender city launch. one under bacchus and career launch. steamer and rabbit special.

A paucity of ideas contemporary Australian poetics is not, though you might be forgiven for suspicion towards the last formal entry on the programme since it does sound like number sixty one on a Little Bourke Street Saturday yumcha menu, not the literary magazines of Samuel Langer and Jessica Wilkinson. Nor does this particular programme seem to succumb to either obvious tones a contemporary poetics conference or symposium might deploy, of either celebration or suspicion.

No, instead, as might be obvious, the approaches are widely sourced: cosmopolitanism and multiculturalism, ecopoetics, troubadour poetics, literary history, modernism, information technology, Steinian poetics, Badiouian poetics, coterie, biography, process, Cambridge School, New York School, postmodernism, experimentalism, mythopoetics, kinetics, breath, electronic publishing, and indigenous poetics. These are the road signs of what was otherwise a curatorship of papers by devotees, luminaries, appreciators and poets. 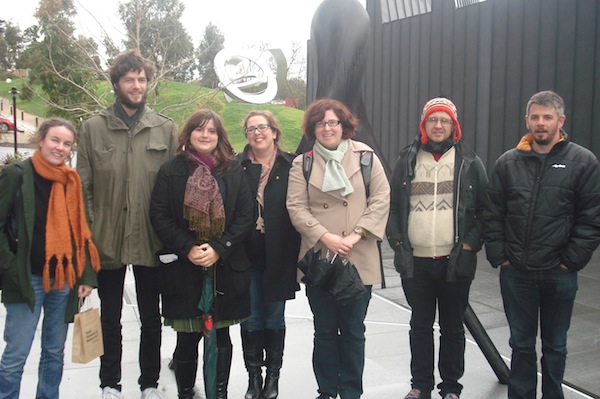 A concerted effort was made to fill the interstices of the critical programme with poetry, a collective recital of the single-line poem ‘I PUT YOUR LETTER IN THE GARBAGE DID YOU GET IT’ by Michael Farrell and a reading of Astrid Lorange’s new chap Eating and Speaking being some of a number of intra-programme events.

Moreover, Melbourne’s poetry embassy, bookstore Collected Works, received a thrum of conference goers for readings by David Herd, Cordite’s own Matt Hall, Ruby Brunton, reading the work of her father Alan Brunton, Martin Edmond, Kate Lilley, reading from her new Vagabond book Round Vienna, and Michele Leggott. Naturally, one must get their passport stamped when entering  Melbourne for poetical purposes, only apt then that a portion of Poetry & the Contemporary take place at Kris Hemensley’s establishment, regaled by interstate, Australasian, and international poets.

On site at the Trades Hall in Carlton, the atmosphere of the conference was not only collegial as all conferences intend, but rather communal. This was aided in part by the single room, single panel-style desk at the front with a generously packed room of listeners on the occasions I attended. For me, it was the first time meeting many poets and critics in attendance: Jill Jones, Siobhan Hodge, Chris Edwards, Martin Harrison, David Herd, Kate Fagan, Lindsay Tuggle, Michelle Cahill, Astrid Lorange, Joel Scott, among others.

The opportunity for those who knew each other already to separate into private circles hardly came about, it seems we all had the opportunity to share our research with at least a handful of strangers. Ann and Michael’s choices in speakers then were canny in another regard, in selecting some of the most devoted and passionate scholars and poets from around the country to spend a few days encountering the poetic passions and curiosities of others, not simply a national caucus where members proffer their latest projects. 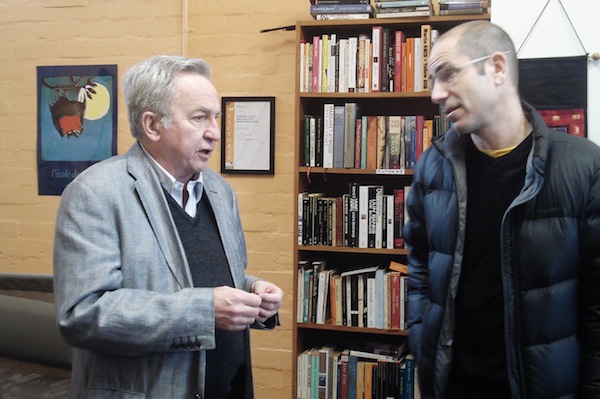 Often, in such an account of a significant literary symposium one wants the critical gist, the tone of a new preoccupation, or a snapshot of today’s poetic horizon. As usual, the best critical material was that which encountered the criticism of others, often unknowingly.

Sam Moginie’s account of John Forbes’ Australianness in poetics as a kind of international entrepot was another way of accounting for Kate Lilley’s celebration of Jacket magazine’s role as an Australian outfit being read for the most part by Americans. Kate Fagan’s account of Chris Edwards’ collage as cipher of material experience might be seen as an example of the Rosetta stone that is Alice Notley’s curse tablets in Linsday Tuggle’s paper on mythopoetics. The use of Lee Edelman’s critique of ‘reproductive futurism’ as a methodology in poetics in Astrid Lorange’s paper could be seen as one precept of the ‘unimproved poetics’ model offered by Bonny Cassidy, Jill Jones, and Claire Gaskin.

Now these are my own associations and undoubtedly readers who had been in attendance as well as the speakers and poets themselves might have difficulty with my personal ascriptions of connective tissue. It is this very contention that proves the worth of such conferences, that the papers remain the same for two people but the lines-through across the scope of the conference be fertile and interminable. It seems Vickery and Farrell plumbed their proposals in aid of this very potential.

The profusion of book and journal launches in the interstices and evenings at the Bella Union Bar upstairs at the Trades Hall upheld the pertinacity of this symposium’s subject, the contemporary, not only in the present, but the instant. Lisa Samuels’ Gender City was a polyvocal spree, Michelle Cahill’s Vishvarūpa was delicately erotic, Astrid Lorange’s hallway reading of Eating and Speaking was goat-filled and glorious, Duncan Hose’s One Under Bacchus (pictured) was a monstrous truffle hound, Liam Ferney’s Career was searching and reminiscent, Benjamin Frater on DVD from the new 6am in the universe was diabolical, and the glossolalia of new cult journal-churchesRabbit and Steamer struck hieratic palms to initiate foreheads.

These are but some of waves of poetry ebbing through a collective madness surely encouraged and not attenuated by the findings of the research fraternities, gangs, cults and itinerants in attendance for the symposium; a sect of Janus. Strays and politicians knocked on the Union bar door demanding to be included, were sat before a brightly lit stage where Pam Brown reminded us of the commandments for sustainable poetics from a cultural and economic point of view. 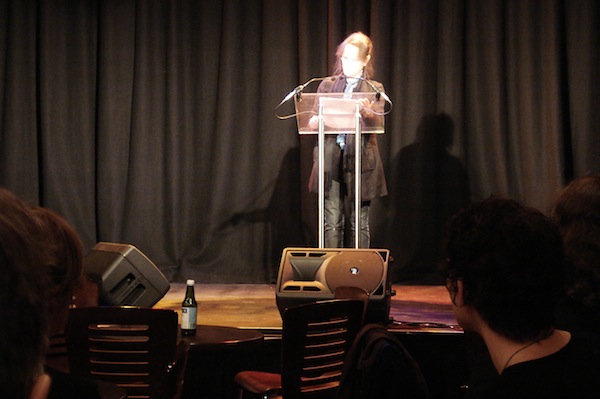 John Tranter continued the Australian Poetry Library conversation with an impromptu speech on stage and may I assure you, reader, as chair for Pam Brown’s paper, not an iota of this was premeditated! John Hawke and Alan Wearne launched the Grand Parade. Gig Ryan (pictured) launched esquires Hose and Ferney and had us in absinthe cackles. Rabbit steamed.

Perhaps the organisers then knew that to stake a claim on the contemporary the symposium  had to be in some manner participating in poetry’s present-tense. This we saw in spades in the secret readings, and then these auspicious launches, with introductions sometimes as dramatic and ecstatic as the books being launched. (Michael Farrell, Jill Jones, Alan Wearne, John Hawke, Gig Ryan: beware! When you launch with such verve every poet will pester you for introductions!) What a spotlight then, to be launching a book in this solar forum.

Sunday was an unofficial day of rhubarb and baked eggs for breakfast, Ern Malley debates, and book buying at Paul Croucher’s shop Red Wheelbarrow Books on Lygon Street in Brunswick, followed by an excursion to the Heide Museum. Born to Concrete, an exhibition of concrete poetry, was the reason for our excursion, its typographical ideas dazzling, with work by Ian Hamilton Finlay, Sweeney Reed, Alex Selenitsch, PiO, and others. Scotland and Melbourne. Early afternoon the skies opened, and the poets and critics dispersed.

Ann Vickery and Michael Farrell should see their Poetry and the Contemporary as a riotous success and responsible for reinvigorating an ebullience for contemporary poetics in its partisan schools, its independents, its exiles, and its present-tense. This symposium succeeded because it was constituted by criticism enamoured of poetry, poetry enamoured of life, and life enamoured of criticism and poetry. To take a line from the late Benjamin Frater’s 6am in the universe, where I take it ‘My forearm’ is the poem:

My forearm forces electricity down the blue throat

and Astrid Lorange’s Eating and Speaking, where I take it ‘nipple’ is the poem: