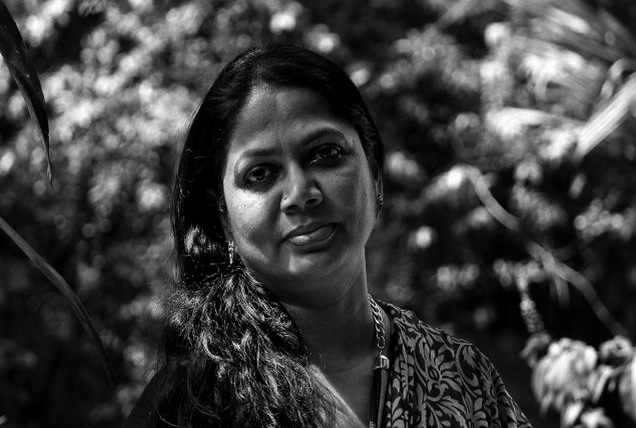 Image courtesy of The Hindu

Rajathi Salma (1982 —) is one of Tamil’s most important contemporary poets. Overcoming orthodoxy, marital violence and imprisonment in her own home, Salma has become an international literary figure and spokesperson for women’s rights. Her work articulates the nuances of repressed desire and sexuality, as well as bringing life to the often invisible domestic space inhabited by many Indian women. With two volumes of poetry, one novel and a collection of short stories, Salma has made her mark as a distinctive Indian literary voice. The late Lakshmi Holmstrom’s English translation of her novel The Hour Past Midnight was shortlisted for the Crossword Book Prize and long-listed for the Man Asian Prize. As well as being a woman of letters, Salma is a committed public servant and activist, running an organization for the promotion of women’s rights and education in rural India. She is the subject of a multi-award winning documentary film, Salma, by British filmmaker Kim Longinotto, and is currently working on a new novel, Toilet, dealing with sanitation issues faced by rural women.

Salma’s language contains a primal boldness that she wishes the many worlds of the marginalised could possess. It is her courage of conviction and starkness of expression that make Salma one of the most influential Indian writers of our time. Her story has inspired women across the world, encouraging her sisters – modern-day Tamil women – to explore a new place of freedom and creative articulation.

As we see in the poem Perspective, Salma’s idiom often breaks with convention, offering a fresh view of everyday things and thus empowering the subject with a multi-dynamic awareness of herself as a presence rather than an absence. Profoundly influenced by the bleak circumstances of her early life, Evil and Tonight present us with the terror and tedium that often limit the possibility of beauty in romantic and sexual relationships. Salma’s poetic voice reveals several hidden worlds of violence and exploitation, beckoning the reader to partake in her dream of creating a world of equality and a future of joy.

Pages: 1 2 3
This entry was posted in TRANSLATIONS and tagged Rajathi Salma, Rizio Yohannan Raj. Bookmark the permalink.
Rizio Yohannan Raj is a writer, educator, translator and political thinker. Her poetry collections, novels, critical volumes and research papers have been published by Harper Collins, Cambridge University Press, Indiana University Press, Kendra Sahitya Akademi, and a number of international journals and magazines. She is the founder and Executive Director of the LILA Foundation for Translocal Initiatives, and currently serves as the Creative Director of ILF Samanvay, the annual Indian Languages Festival of the India Habitat Centre, New Delhi.