The importance of appraisal and valence

For the past few decades the field of evolutionary psychology has been advancing the broad hypothesis that the architecture of human psychology has, like the rest of our biological makeup, been the result of adaptation to ancestral environments under the weight of natural selection.1 As eminent cognitive psychologist Steven Pinker explains:

An explanatory hypothesis for some emotion or cognitive faculty must begin with a theory of how that faculty would, on average, have enhanced the reproductive chances of the bearer of that faculty in an ancestral environment.2

The field is divided on innumerable topics, as one would expect, and even the general premise is not without its critics.3 But I wish to take one general (and generally uncontentious) claim from the field for use here, namely the insight that, by and large, there is a correlation between what we like and what is good for us (or at least, what we like and what was good for our ancestors). To use the most obvious examples, the reason food, sex, water, fresh air, the view of the ocean and open landscapes elicit pleasure in us is because those of our ancestors drawn to them were more successful at survival and reproduction than those that were not. The psychologist Paul Bloom puts the basic point succinctly in How Pleasure Works (2010) as follows:

Animals need water to survive, and so they are motivated to seek it out. Pleasure is the reward for getting it; pain is the punishment for doing without.4

There are two interrelated relationships being raised here. The first is between genetic advantage and appraisal (we generally judge positively those things that are or have been genetically advantageous). The second is between appraisal and valence (we receive pleasure from those things we judge positively). It is this second relationship that I am concerned with here, with an emphasis on the fact that these relationships have an evolutionary heritage and thus can be seen as natural and hardwired (though of course not inflexible).

The relationship between valence and appraisal extends, importantly, to our social as well as our biological and physiological interactions, underpinning the forces of love and empathy, as well as aversion and conflict. In the process of judging someone’s actions, or assessing any social situation, there is a tendency toward experiencing pleasure when judging positively and displeasure when judging negatively, a fact attested to by the language we use to express our emotional experience – ‘disgust’ is both a physiological revulsion and a state of disapproval; ‘desire’ both a feeling of attraction and a state of approval. Crudely put, this general relationship can be expressed as follows: 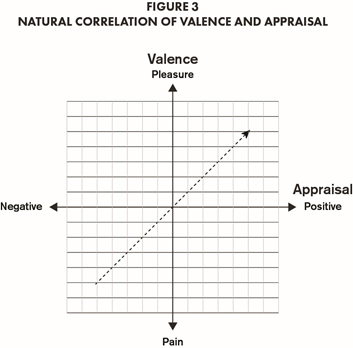 For graphic simplicity, here I am employing a one-dimensional model of valence (a polarity of good / bad, pleasure / pain). As Vera Shuman (et al.) note, ‘one-dimensional valence plays a central role in current emotion theories, such as theories of core affect and the psychological construction of emotion in which valence constitutes, together with arousal, core affect.’5 Nonetheless, a more nuanced view of valence may be desirable, and Shuman (et al.) have made positive steps toward such a view. Shuman (et al.) hypothesise two distinct levels of valence – macro and micro – arguing that valence can be effected on different micro levels (the five studied, though not exhaustive, are pleasantness/beauty, goal conduciveness, power, compatibility with the self (self-congruence), and compatibility with norms (moral goodness).6 An important implication is that ‘not all appraisals may be available at birth (e.g., moral goodness), and they may differ in salience.’ Accordingly, they write, not all micro-valences may be present at every moment in time.’7

Multiple levels of micro-valence will likely be involved when reading poetry, and a consideration of these would further enrich the current study. Here, however, I limit the consideration to the macro level, which entails the ‘integration of complex affective experiences into a common currency.’8 The valence axis in Figure 3 thus presents macro-valence as a summary of micro-valences that are necessarily more complex.

The correlation between valence and appraisal, however, distils a relationship that Barrett calls valenced core affect. Core affect entails the interaction of appraisal (or in Barrett’s terms, valuation, meaning ‘analysis in which something is judged as helpful or harmful in a given instance’) and changes in ‘the homeostatic (core affective) state of the individual.’9 As evolutionary psychology has shown, this relationship has evolutionary underpinnings, but it is also cross-cultural, and manifests in the way we experience and describe emotion. As Barrett writes,

It is possible to say that valence is an invariant part of emotion experience. All individuals focus on valence as an aspect of their experience.10

Indeed, the basic relationship between appraisal and valence appears in various forms within fields as diverse as consumer research (where customers judge positively those companies that elicit certain feelings),12 film (where directors frame the appraisal of particular characters by eliciting physiological responses in an audience)13 and psychological studies on beauty (where, according to one recent article, the apprehension of beauty requires cognitive appraisal).14 In each instance, valence can influence appraisal, and vice versa. In film, for instance, a director can make an audience judge a character negatively by eliciting negative feelings when they are present onscreen. Similarly, if a screenwriter wants an audience to experience negative feelings at a particular point, they can have a character behave in a way that elicits negative judgement. Acclaimed director Sidney Lumet in his seminal Making Movies (1996), for instance, describes using different lenses to shoot particular characters, and one specific lens for a protagonist because he ‘wanted an aura around him of gentility and tenderness.’15 In these ways, while perception can guide feeling, feeling can be manipulated to guide perception. This is a phenomenon Barrett refers to as affective realism: the ability of feelings to influence what we perceive.16

The poetry of Sharon Olds (and indeed the work of many great poets, and other artists) consciously runs against the grain of this evolutionary link between valence and appraisal, effectively inverting the natural tendency of affective realism. As we have already seen in one instance, Olds employs emotionality that consists of conflicting dominant and sub-dominant emotions. The most profound effects of her work, however, operate at the level of meta-emotion. Olds’s work often has us feeling positively while judging negatively (and occasionally feeling negatively while judging positively), such that our experience of the hardwired relationship between appraisal and valence is inverted: 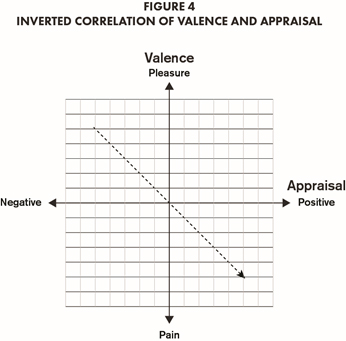