Stag’s Leap recounts the collapse of Olds’s marriage, divided into the four seasons over which it occurred. The opening poem in the collection is rich with emotionality, brimming with contradictions that enact a tension between ecstasy and grief, as the initial steps are taken toward the speaker and her husband’s divorce. In the very first lines (in fact, in the first title), the narrator positions the reader as confidant, tacitly acknowledging their knowledge that the collection is to detail the collapse of her marriage:

‘While He Told Me’ begins by enacting a number of dualities and positioning the reader (with the narrator) in a state of liminality. The title immediately puts the reader in the pivotal moment of the relationship’s decline, omitting all backstory. The reader surmises that what is being told may regard the beginning of a new relationship between the husband and another woman (referred to simply as ‘her’ later in the collection); or, at the very least, what is told is an intention to part. The enormity of the situation emotionally is contrasted with the relative ‘smallness’ of the space: ‘I looked from small thing / to small thing, in our room.’ The omission of a name or descriptor and the resulting starkness of the pronouns in ‘While he told’ (…) in our room’ sets ‘he’ and what is being told (large) against the ‘our’ and ‘I’ looking at small symbols of time passing: the clock, the sepia postcard. Such dualities have an oppressive, depersonalising effect, phrasing the exchange in a way that negates the narrator’s agency: she replies not in words but only in (decisively small) actions.

On the other hand, the lines are ambiguous. We are not given precisely what is told, nor how it is said; rather, we are only given what is occurring during and after the telling takes place. The opening lines are a periphrasis, revealing a large amount of emotional meaning (we immediately understand the hierarchical dynamic of the relationship) from limited semantic content (since we don’t get, here or elsewhere, the details of exactly what is said). From the very first lines in the poem we are drawn into a state of emotional liminality, with enough to understand that the narrator’s relationship is collapsing, without enough to understand why. Indeed, much of Stag’s Leap creates, quite intentionally, this state of liminality, which the title ‘Stag’s Leap’ represents. As Olds explains in a TED reading titled ‘The poetry of the in-between’:

When a stag leaps off a cliff – a low enough cliff, a kerb, maybe – to get away from a hunter, the deer in mid-leap is between danger and hoped-for safety. And a poem is in between its writer or speaker and its hearer or reader. Right now, physically, a poem is going to be in the air, between me and you; from one (me) to the one (of each of you). At the end of a long marriage, it’s in between the old love and troubles and the new… love and troubles.2

Given the above comments, it is fair to say that Olds is quite consciously achieving such liminality in the text. This emotional uncertainty sets the backdrop for the emotional(ity) inversions that occur later in the poem, where we read:

A survey of the metrical patterning here reveals a falling into metrical regularity as the speaker begins to ‘snooze’, then a disintegration of metrical regularity precisely at the moment of her (literal and metaphorical) wakening; the transition from love and affection to distance and parting. While the narrator ‘snoozes’ on her husband the lines comprise two iambs (‘and snoozed on him’), two anapaests (‘while he read, and he laid’) and three iambs (‘an arm across my back’). But before the second line here falls into iambic regularity, we receive the jarring interruption of ‘When I opened’:

The cadence here is diminished, collapsing into the prosody of ordinary speech. This is an instance of emotionality: a point at which there is ‘conflict or contradiction in emotional states, objects or language.’5 Here we have conflict in both emotional states and in the language itself. To begin with, we have happiness peppered with fear, evidenced by the starkly enjambed ‘dreading / bliss’ – which is already contradictory – which then inverts further to melancholy tempered with calm:

The metaphors and iconography here are calming – the flowers in the vase, the religious iconography of the shepherd praying – yet they are decisively melancholy. The tulips (and the homophony on ‘two lips’ here adds another physical dimension to the distance created, particularly given the poem’s first half) ‘stretched / away from each other extreme’ turns a symbol of love into a symbol of the absence of love, while the praying shepherd is ‘imagined’, and paradise ‘make-believe’, turning symbols of hope into symbols of naivety and despair. Emotionality within the text thus confuses a reader’s expected emotional response, by couching ostensibly positive imagery within negative descriptors. Here, then, we have emotionality (as inversion) inverting, underscored by inversion at the level of rhythm.

As the poem progresses, we move from a soothing rhythm conveying a mixture of happiness and fear into a jarring rhythm expressing a melancholic calm. Everything flips (happiness and fear into unhappiness and calm; a soothing rhythm into a jarring rhythm); all contradictions remain in place but are inverted. The result is a disconnect between what we might think of as the dominant mood (happiness / unhappiness), the underlying or sub-dominant mood (fear/calm), and the cadence of expression (rhythmic / arrhythmic). We can visualise this process as follows: 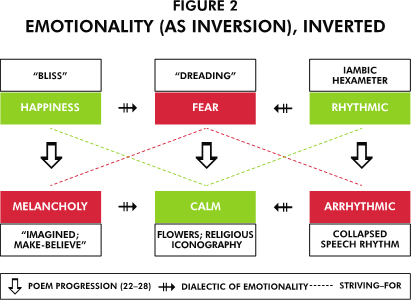 Frustrated reader expectation can be understood as a striving-for (or expectance of) the requisite (or appropriate) sub-dominant mood and cadence, the background expectation against which existing / apparent connections are projected.