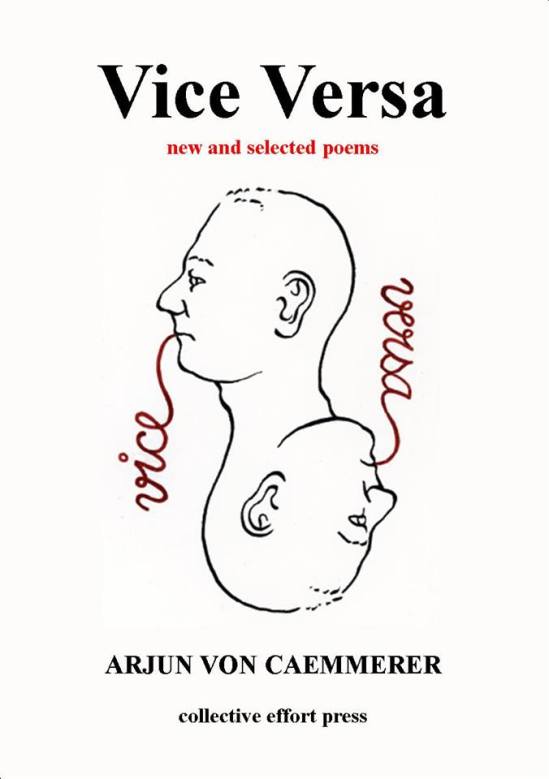 Tasmanian poet Arjun von Caemmerer’s Vice Versa: New and Selected Poems (Collective Effort, 2016) is a chronological selection from an oeuvre that spans publications from Two’s Kisses (1992) to Recombinants (2015). At its best, it’s idiosyncratic and intriguing, characterised by its playfulness, wit, concrete effects, typography, and variety of forms.

Vice Versa’s earliest selections are primarily concrete poems. The poem ‘i-saw’ is an early keystone (and instruction) for the puzzles and riddles that follow: it requires a deliberate reading and re-reading to deliver its simple message, ‘the more you look the more you see’: 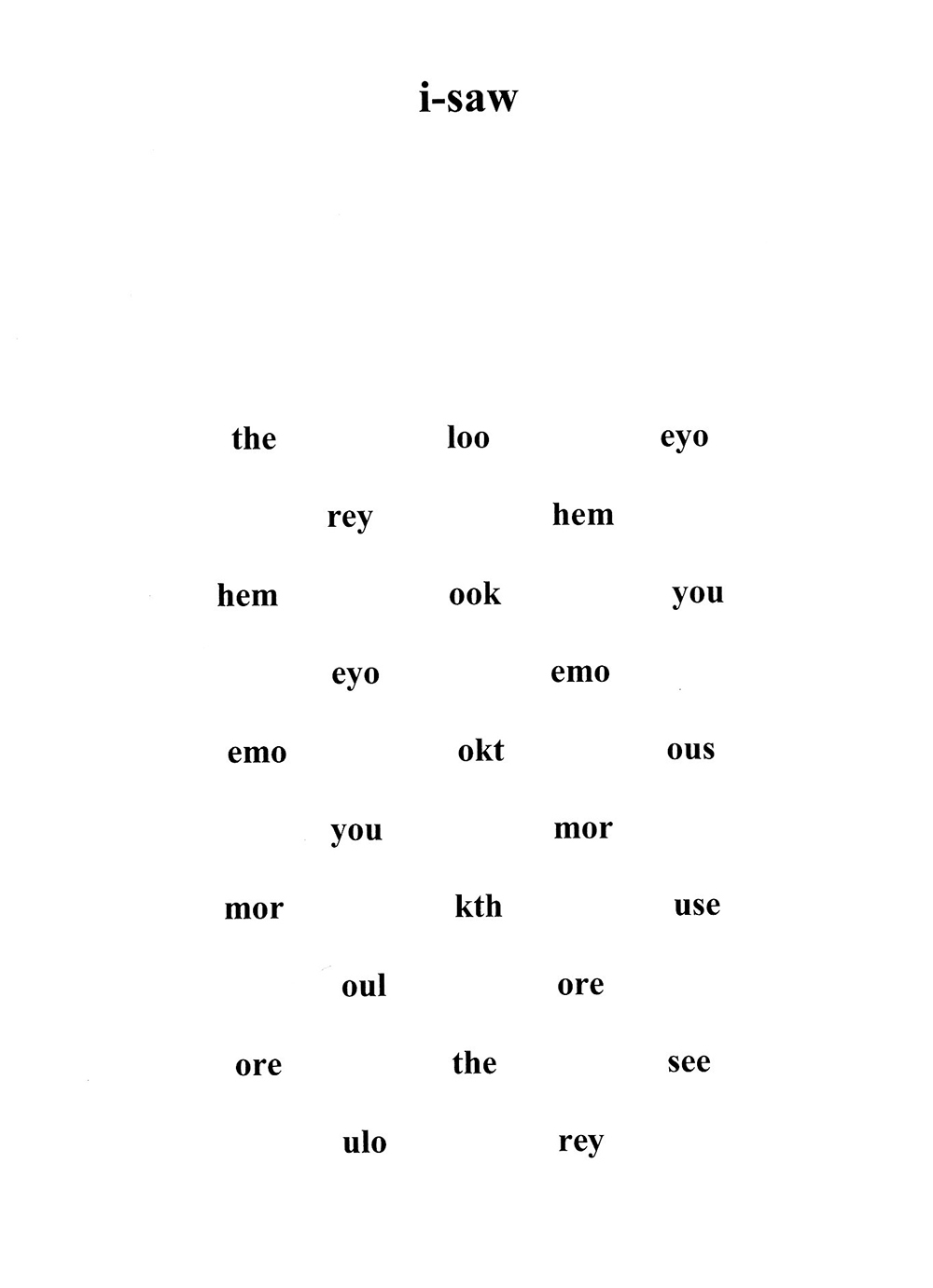 The poem ‘Schrödinger’s Schizophrenia’ is a clever play on the physicist’s famous thought experiment, through a visual arrangement of the word ‘bifurcation’, and the isolation of its parts: 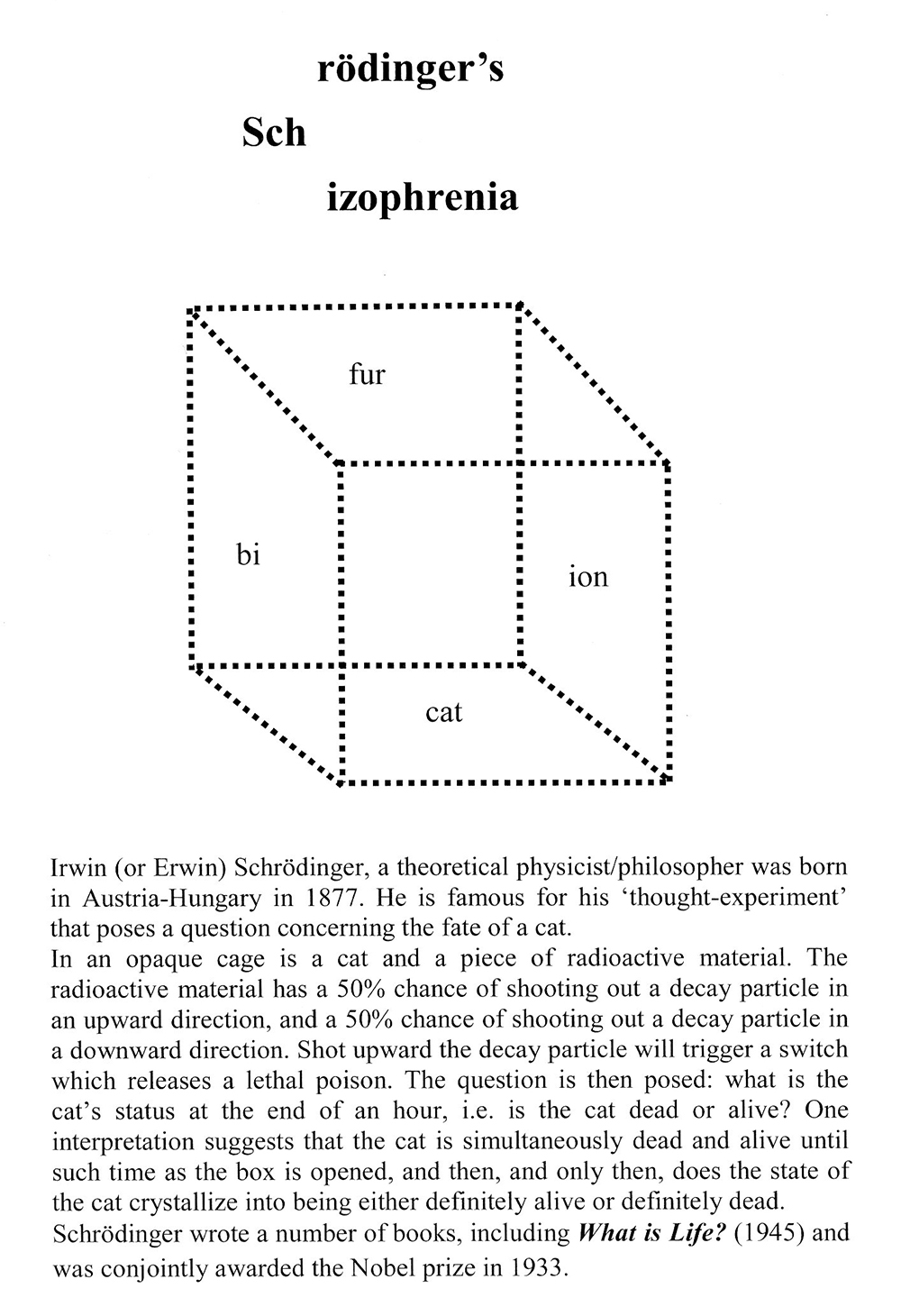 William Carlos Williams famously described poems as machines made of words, and these poems are small, finely-made devices that do a single thing well. At times, the poems resist decryption, but their clevernesses is worth the endeavour: for example, in the somewhat inscrutable poem ‘(J)ousting the Woman of Letters’, responding (as a note tells us) to the Demidenko controversy, we find the understated epigraph ‘(re Frau D.)’.

The book’s centrepiece is 2010’s Lingua Franka: A Concrete Poetry Homage to Frank Zappa, the 56 pages of which are reproduced in colour on glossy paper. The poems are inventive and various in their forms and ruses. The concrete poem ‘FZ 52’ uses the page to mirror the recurring numbers in Zappa’s birth and death dates: 21/12/1940 and 04/12/1993. Another concrete poem, ‘King Klang’ is an arrangement of the titles of songs recorded by Zappa with colour references in them (starting with ‘Black Beauty’ and ‘Merely a Blues in A’), each in the relevant colour. Other poems in the sequence take the form of haikai, anagrams, mirrorings and blank pages. In other poems, the effect is typographic: ‘What Goes Around…’ yields a clockwise reading of ‘karma’ and ‘fate?’: 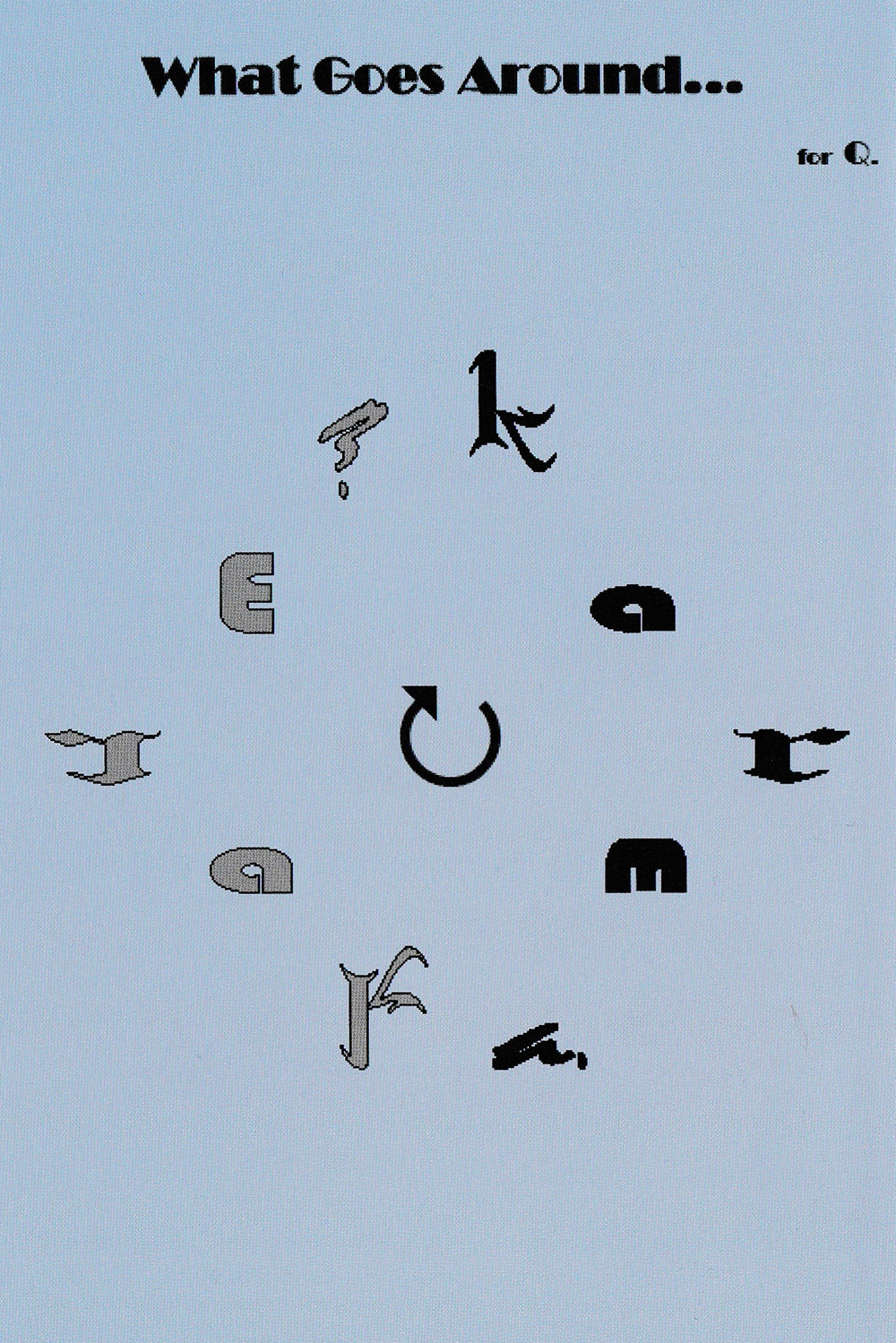 The Lingua Franka poems, and the book’s concrete poems, are among the most interesting and satisfying. They present von Caemmerer’s work at its most idiosyncratic. The satisfaction they offer is in the process of deciphering, as opposed to the ordinary satisfactions of lyric poetry, such as the memorable line, or apt metaphor.

Vice Versa multiplies its explorations of form. ‘a dransfield diction’, a cento comprising 24 pages of short poems, is composed from the index of first lines of Michael Dransfield’s Collected Poems, while ‘Cross-Stitch’ fuses the cento and acrostic, appropriating phrases from the index of first lines of Emily Dickinson’s Collected Poems, and presenting them as acrostics dedicated to Dickinson and her parents. There are also spoonerisms, with specific concrete arrangements, a litany of medical collective nouns (‘A Drift of Sleep Physicians / A Stream of Urologists / A Clot of Vascular Surgeons’), musical clerihews, a sestina, and a parody of Dylan Thomas’ famous villanelle (‘Bold girls, near spent, flushed unwhite / Split the colours of the spectrum / Rouge, rouge with the ardour of their fight.’) Notable among the other explorations of form are the 108 three-line zappai that make up ‘momentoes’ [sic], describing a morning yoga class, and the 20 lipograms of ‘Recombinants’, based on the names of arthropods (mostly insects) featured in The Green Brain, a cycle by Australian pianist and composer Michael Kieran Harvey.

The book’s least satisfying poems are the limericks from A Bunch of Fives (2009) and Geographical Tongue: Odes to Postcodes (2010). The latter is a set of over 130 limericks that take their cue from an alphabetical listing of Australian suburbs, from Abba River to Aranbanga, and a number of other locations. It’s an admirable and obsessive project, but it proves the limerick is essentially a dessert poem, that is, something sugary and intense that’s preferably served in small portions. A smaller, stricter selection would’ve shown the best of them to advantage:

Elsewhere, the limericks suffer from slightness, imprecise rhymes or aberrations in rhythm:

Von Caemmerer’s Vice Versa is engaging and inventive, particularly the concrete poems, which show his work at its most distinctive. Despite weaknesses, the book is evidence of a sustained creative engagement with the serious possibilities of playfulness, form and constraint.

This entry was posted in BOOK REVIEWS and tagged Arjun von Caemmerer, Thom Sullivan. Bookmark the permalink.
Tom Sullivan had a short collection of poems, Airborne, published in New Poets 14 (Wakefield Press) in 2009. His poems have appeared in a range of books and journals, including The Best Australian Poems, Australian Love Poems and Australian Book Review's 2016 States of Poetry anthology.