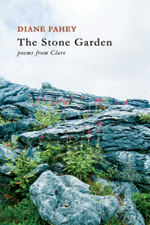 The Stone Garden: Poems from Clare by Diane Fahey
Clouds of Magellan, 2014

A note on the copyright page of The Stone Garden reads: ‘The Stone Garden is written in tanka, the five-line Japanese lyric form, the first and third of its lines having five syllables, the others, seven.’ The book keeps to this syllabic form throughout with two five line poems to a page. These poems from Clare unfold in six sections and Fahey’s craft is evident in the way she can break registers of imagery with engaging shifts and turns.

The first section has the poet settling into the ‘Hill Cottage’ at Ballinruan. Largely descriptive, the poems gently evoke a sense of place and the people who inhabit it. There are moments of sharp perception, for example, where watching the ‘clouds, brute black barges drifting/on ten o’clock light’ becomes ‘Summer gothic’ (p. 9). The language is nonetheless tranquil, the section finishing with ‘the sough of black wings’ (p. 10).

Section II takes the poet into ‘Dromore Wood’ where ‘Each tree [is] a presence’ (p. 13). On a ‘Woodland trail’ the poet is lost but not lost:

At the visitors’ centre, the poet contrasts the tableau to the live animals outside, including:

At Section III the poet arrives in ‘The Stone Garden’ for which the collection is named, and begins by describing ‘Poulnabrone portal tomb’, ‘[u]sed for fewer than 30 burials between 3800 and 3200 BC’:

In this celebration of stone:

and the human becomes witness to the multiplicities of other-than-human lives; their abundance – ‘Every year up to 30,000 pairs of seabirds breed here’ (as an epigraph to ‘At the Cliffs of Moher’ tells, p. 28) – and their loss – ‘Bears died out in Ireland a thousand years ago’ says the epigraph to ‘At Aillwee Cave’ (p. 29). In the latter the poet empathises with the bear:

As the last poem in this section relates, this is ‘storied earth’ (p. 30).

Section IV has the poet ‘In Transit’. While the navigator might ‘misread’ the map, ‘always we end up somewhere’ (p. 35). One place ‘we end up’ is a ‘Bird of prey centre’, where the poet encounters:

In this section a number of poems evoke birds of prey. In ‘Sunset’, ‘A hawk cuts hilltop/oaks from their shadow’ (p. 38). These birds then move us toward ancestral space, and the ‘Fahy Graveyard’ (p. 38), so that the journey becomes an ancestral pilgrimage of sorts, and the evocation of predator and prey is echoed in the memory of the famine (‘At a Famine Graveyard’, p. 39). At the end of the section we come to a church concert in Crusheen where:

The fifth section focuses on encounters with people over breakfast, morning tea, to the closing meeting with a ‘fresh-eyed young man’ outside a tourist office. In simple language, with judicious use of dialogue, the poet evokes a kind of sharing of information and interest that occurs on such a journey, and reference to a lough moves poet and reader into the final section, ‘At Lough Derg’, where ‘[f]rom the pier’ the poet sees the ‘frisson of a lily pad/dry inside its rim of light’ (p. 55). The description of a ‘Tern’ demonstrates once again Fahey’s honed facility with language and imagery:

Gently, the poet shifts the reader’s perception, when she describes nests in the windows of a ‘monastery’s round tower’, from which ‘ravens/have the best view in Ireland’ (p. 58). The collection finishes with a mass of starlings rising at evening and crashing ‘like a tidal wave along/ the horizon’s backlit shore’ (p. 60).

This might be called a lyrical, ‘nature poetry’ in the romantic tradition, inviting the reader to celebrate a world that is more than human and to allow her perceptions to shift, to mourn the losses that inhabit the beauty that persists. If it is a kind of ‘landscape poetry’, then it is also a poetry that situates humans in relation to other humans, and their histories. Whether it is strictly tanka in terms of its uses of imagery, as distinct from the discipline of its syllabic structure, the five line form works well in The Stone Garden. to create its own six part garden.

This entry was posted in BOOK REVIEWS and tagged Anne Elvey, Diane Fahey. Bookmark the permalink.
Anne Elvey is author of White on White (Cordite Books 2018), Kin (Five Islands Press 2014) and This Flesh That You Know (Leaf Press 2015), and with Massimo D’Arcangelo and Helen Moore co-author of Intatto-Intact (La Vita Felice, 2017). She is managing editor of Plumwood Mountain: An Australian Journal of Ecopoetry and Ecopoetics. She holds honorary appointments at Monash University and University of Divinity.