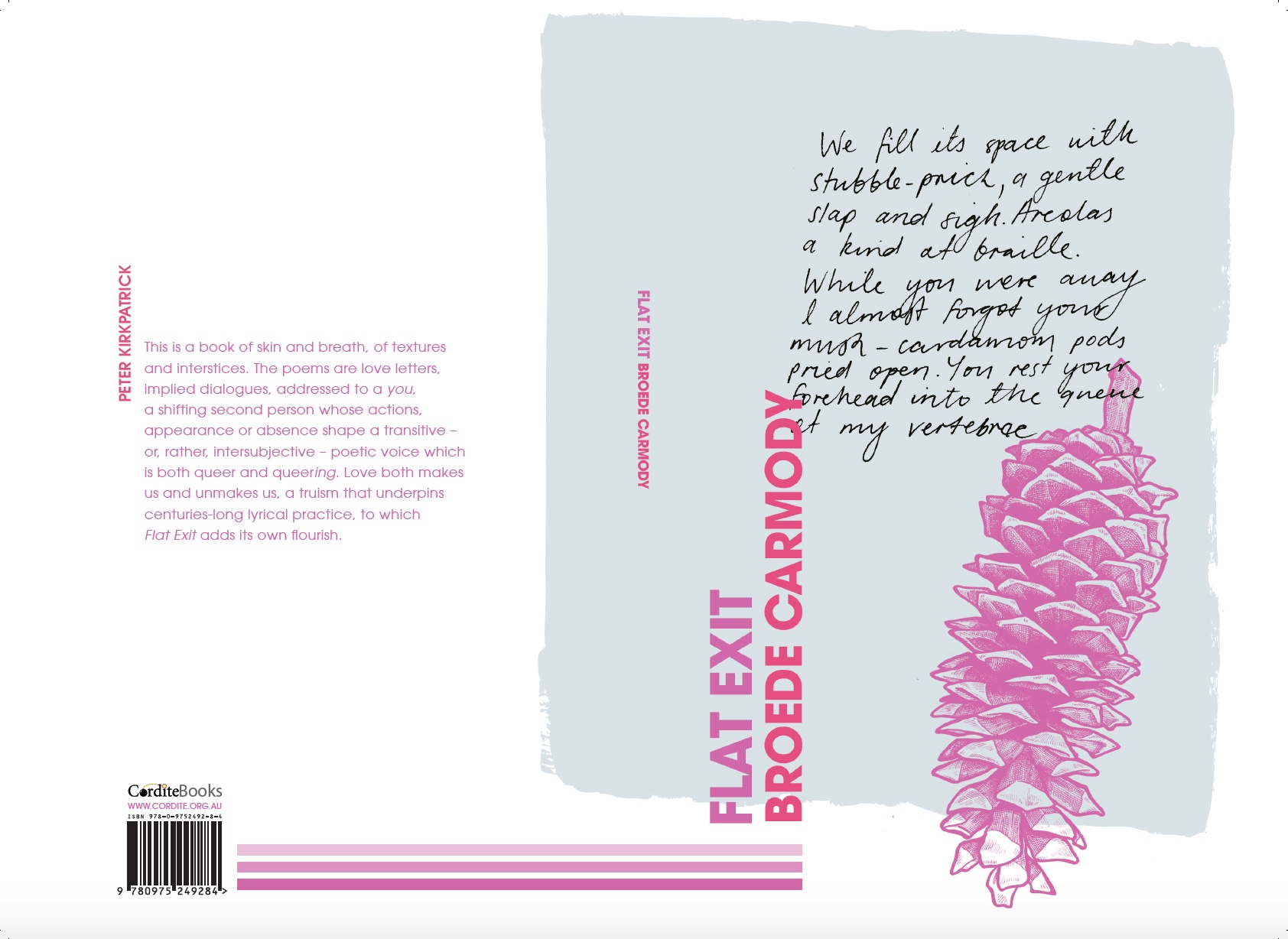 A first book of poems needs no introduction, being its own forerunner. As a consequence, this note merely states the obvious: that Broede Carmody is a young writer with a great lyrical talent.

Flat Exit is a book of skin and breath (its very last word is inhale), of textures and interstices, ‘the space between us thinner than / cigarette paper’. Water and immersion are keynotes – from the first section, ‘Falling into the River’, to the third, ‘Learning to Breathe Again’ – but so too, not unrelatedly, are love and sex and their complicated romantic history. With epigrammatic wit, Carmody writes:

later adding, with greater worldliness, that

That love both makes us and unmakes us, and in doing so can also make poetry, is a truism that underpins centuries-long lyrical practice, to which Flat Exit adds its own flourish. Carmody treats the theme very much in his own manner, not only in the keenness of his lines, but in the way he negotiates contemporary landscapes of identity and desire. These move between country Victoria and inner-city Melbourne, with a surprising sidetrip to Finland, and across these changing environments the poems trace fresh modes of being in which ‘We move through each other, / on to the place we’re going’. So, in Australia,

while, in Scandinavia, ‘We try on each other’s skin’.

In the intimacy of breath – ‘Swerving in and out of love is breathing’ – language itself becomes embodied, inflected by what the poet calls his ‘dingo accent’. This is a world in which areolae are a ‘kind of braille’, and a mango in a lover’s hand peels ‘back the syntax of our skin’; while a trout is killed by inserting two fingers in its gills, ‘the creature’s head / flung back like a comma’. As this suggests, under the skin the poet also discovers death, the ‘flat exit’ of the title: ‘Let me fix another cup of black’, he writes. Elsewhere, in the ‘Language of Dinosaurs’ (a dead language if ever there was one), ‘Your trepid skin is full of mammals, / a palaeontology of sadness’.

Most of the poems of Flat Exit are love letters, implied dialogues, addressed to a you, a shifting second person whose actions, appearance or absence shape a transitive – or, rather, intersubjective – poetic voice which is both queer and queering. Just so, the poet reminds us that the deeper truths of a relationship often lie in its casual details:

Reading these poems is not unlike Carmody’s own description of swimming: they will turn ‘skin to goose flesh / and the world will feel tipped / upside down’. Despite its title, then, Flat Exit is less about departures than arrivals – its own arrival, in fact: ‘An emergence of nude speech / and harrowing sky’. If it needs no introduction, I am nonetheless delighted to have provided one.

This entry was posted in INTRODUCTIONS and tagged Broede Carmody, Peter Kirkpatrick. Bookmark the permalink.
Peter Kirkpatrick has taught across a wide range of English and Australian literature, as well as literary theory, and he is particularly interested in poetry’s use and transformation within popular culture over the last hundred years. Current research projects include The Everyday Life of Poetry in Australia: a history of the public culture/s of poetry, taking in readership, education, performance (elocution), publishing and the mass media, and Sydney Literary Modernism 1890-1970: an exploration of the relationships between modernity, popular culture and "high" literature. He is currently writing a book on literary modernism in Sydney, with chapters on a variety of poets and fiction writers from Henry Lawson to Patrick White. I've published two collections of verse, and am working towards a third.