‘It’s no gift to have this kind of knowledge’: Indigo Perry in conversation with Dani Netherclift 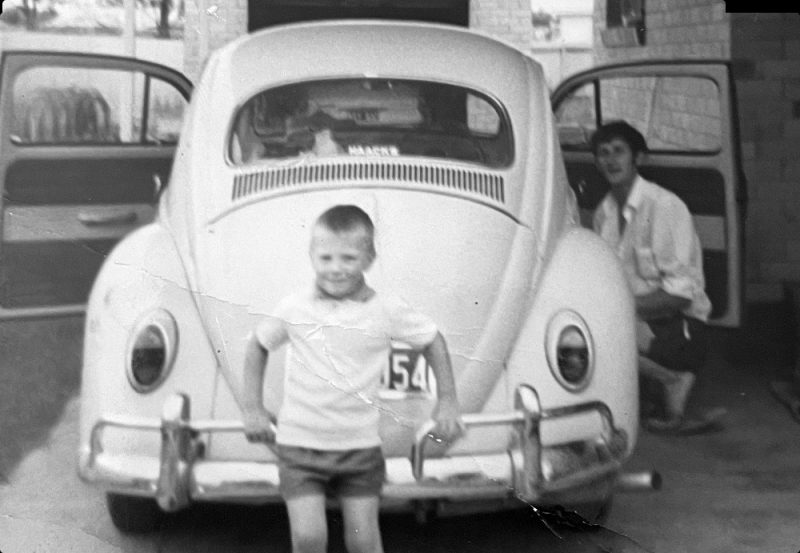 A photograph of Indigo Perry and Dani Netherclift’s brother and father.

Indigo Perry and Dani Netherclift are sisters living and writing in Victoria. Their father and older brother both drowned in an irrigation channel in 1993. Below is a conversation about the ways that this tragedy has shaped their creative practices both singularly and in dialogue with each other’s work. This exchange highlights how the intangibility of grief potently forms an invaluable insight into a how their experiences are forced upon their understanding of writing and poetics. Such an exchange trusts the reader to embrace their account tenderly when considering how to challenge elegiac traditions.

Indigo Perry: After I knew, I kept returning in my mind to the precise moment when they drowned. (But until now, I have not thought this through, that it is unlikely, impossible, truly, that they simultaneously stopped breathing after their lungs filled with water [the ingress]. Even though I have mourned each of them differently and often separately, I have always thought of them as having drowned together, always two of them, but as one. Of course, with their different ages and health, constitutions, shapes – their different matter – our father and brother’s lives would have ended at different times on a clock.)

We have been alike through it all in our desire for detail. Timing. Biology. Physics. The corporeal, yes, but more than that. Reconstruction leading to a kind of reanimation in the slowed, blurred light quality of dream or memory.

There came a moment that afternoon when both were gone, and you were standing on the bank of the channel and having the thought you have described to me, that nobody else knew what had happened yet. At that same moment, I was probably swimming at Brighton Beach. I remember being in the water, not simply that I was in the water; I recall the feeling of being immersed. It was hot and I have never liked hot weather. Being up to my neck in the cold water of the sea was a relief, but even then, the storm that would arrive by evening was beginning to show itself in the choppy waves and in the sand blowing into my face. Still a hard blue, the sky was the kind that my daughter, born many years after that day, would come to describe as noisy. But the storm was incoming. Also incoming was a cascade of knowing. The news of our father and brother’s deaths flowed through you and our cousin at the channel, the fisherman who stopped to help, the police, our uncle, our grandparents, our mother, me, our brother and onwards. Later, I would picture myself, immersed, oblivious, in the cold sea, hard sky blaring, and wonder how I could not have known what was happening. How was it that they – those two – were drowning and

Dani Netherclift: Years later, my soon-to-be mother-in-law was fitting me for my wedding dress in faraway Kiama, New South Wales. She was talking about the wedding of her eldest daughter. This wedding took place on the day that our father and brother died. She said that everyone had been annoyed with my husband for turning up to the wedding with a black eye. Though we had known nothing of each other at the time, when I learned of it, I recognised that sense of a wound that marked space and damage for this day, carving out remembrance for the grief of a future wife. I imagine this black eye in the same light as your sensation of being immersed in water that day, un-knowing.

In one of Michael Ondaatje’s ‘Wells’ poems from Handwriting, he elucidates the location of the soul as being ‘always’ close to the site of a wound [A black-eye, water experienced as pleasure]. The practice of writing or poetics and the ‘practice’ of grief are at times like this seamless.

In the same way, vis-a-vis our talking, letters and writing, our grief and memories have been since the beginning something knitted together of fragments, observations,

Pages: 1 2 3
This entry was posted in INTERVIEWS and tagged Dani Netherclift, Indigo Perry. Bookmark the permalink.
Indigo Perry has written two memoirs, Darkfall (UWAP) and Midnight Water (Picador), shortlisted for the National Biography Award. She has recently published memoir and poetry in Meanjin, Southerly, Australian Poetry Journal. She lives in the inner north of Narrm on unceded Wurundjeri-Woiwurrung Country.


More by Indigo Perry on Cordite Poetry Review →
Dani Netherclift lives on unceded Taungurung Country in north-east Victoria. She has had poems and essays published in Cordite, Westerly, Island, Stilts, Rabbit, Mascara, Plumwood Mountain and others. She was the winner of the 2020 AAWP/The Slow Canoe Creative Nonfiction prize for her essay ‘Incomplete archive of blue’.