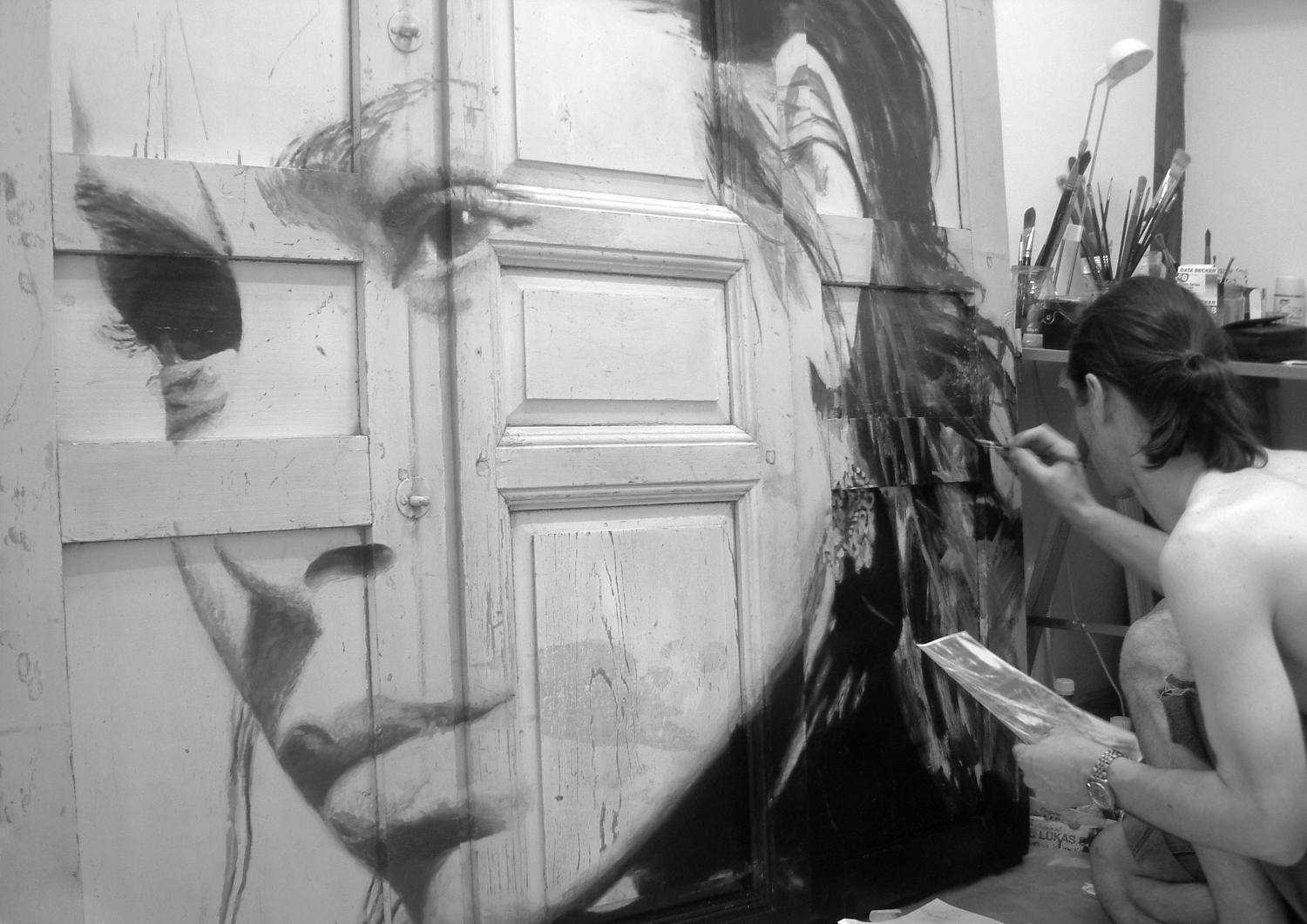 Working on the oil painting La Súndari (2005), which was exhibited in the Saatchi Gallery, London

In those early days and weeks, I lived with a constant feeling of anxiety which oftentimes would increase into a wave of acute panic. On one occasion I went to see an exhibition at the Hayward Gallery and halfway around the exhibition I started to have problems breathing. I began to feel I was suffocating, getting heart palpitations with the world closing in on me, but this was a large spacious gallery and being a week day there were not many visitors. I found a reading room where I could sit and wait for the anxiety to pass but it didn’t go away. I was aware it was a panic attack but I was unable to resolve the disconnect between an activity I enjoyed and the anxiety I felt, which just kept on relentlessly building, and so finally I left the exhibition and only once outside and walking in the cool air by the river did the anxiety slowly begin to pass.

A couple of weeks later while making time before meeting a friend, I picked up a book from a box at the door of a second-hand shop and read the opening line of Denton Welch’s A Voice Through a Cloud:

One Whitsun holiday, when I was an art student in London, I got on my bicycle and left my room on Croom’s Hill for my uncle’s vicarage in Surrey.

Denton Welch wrote the book following a serious bike accident which left him paralysed and he fought unsuccessfully to finish it as his health failed him. This both intrigued and frightened me. I was still living under a cloud of fear and with the list of echoes with my own life in that opening line I could only hope my bike accident and subsequent panic attacks wouldn’t lead to the same end. (I’ve always wanted to write a book with the same opening line, tweaked so it is true for me.) Shortly after the panic attacks began I passed an elderly lady in the street who spoke to me and commented in passing that I had a good year ahead and to make the most of it. In my fear-full mind I interpreted her as saying I only had a year left to live. I was secretly relieved when the year was out and life continued.

Then one day my father, at a loss for how to help me after holding my hand as I tried to sleep one night, asked a colleague from the local hospital to come and see me. She came to talk, listen and to give me a reflexology foot massage. The massage helped me let go of my fear for a moment and that evening although I felt pain in my chest I felt that it was a healing pain, rather than a destructive pain, and I was able to let it be and sleep well for the first time in weeks. She spoke with me about the process the body must go through to heal following a trauma and said it was normal that it would take time. We also spoke about the impact on me of the bike accident the week before the anxiety began. Unlike a previous cycling accident which had put me in hospital for a few days, receiving care and attention, this time I’d just gone home and I hadn’t had any support following the shock of the accident. I had a lot of other worries at the time but it made sense that this could have pushed me over the edge. Maybe the bee or wasp had a hand in that too.

Another book I chanced on much later on in a local charity shop was Teresa Hale’s Breathing Free. Based on the work of Ukrainian doctor Konstantin Buteyko, it introduces a programme of breathing exercises to reduce the tendency to hyperventilate, based on slow shallow breathing. It is very similar to the breathing control needed for scuba diving where the last thing you want to do when you run into problems underwater is panic. I found it very useful in helping me return to a regular unconscious breathing pattern that had been knocked out of kilter by the anxiety. We take breathing for granted but the urge to breathe deeply and hyperventilate when afraid, although useful when in flight or fight mode, is not helpful when the cause of the fear is fear itself.