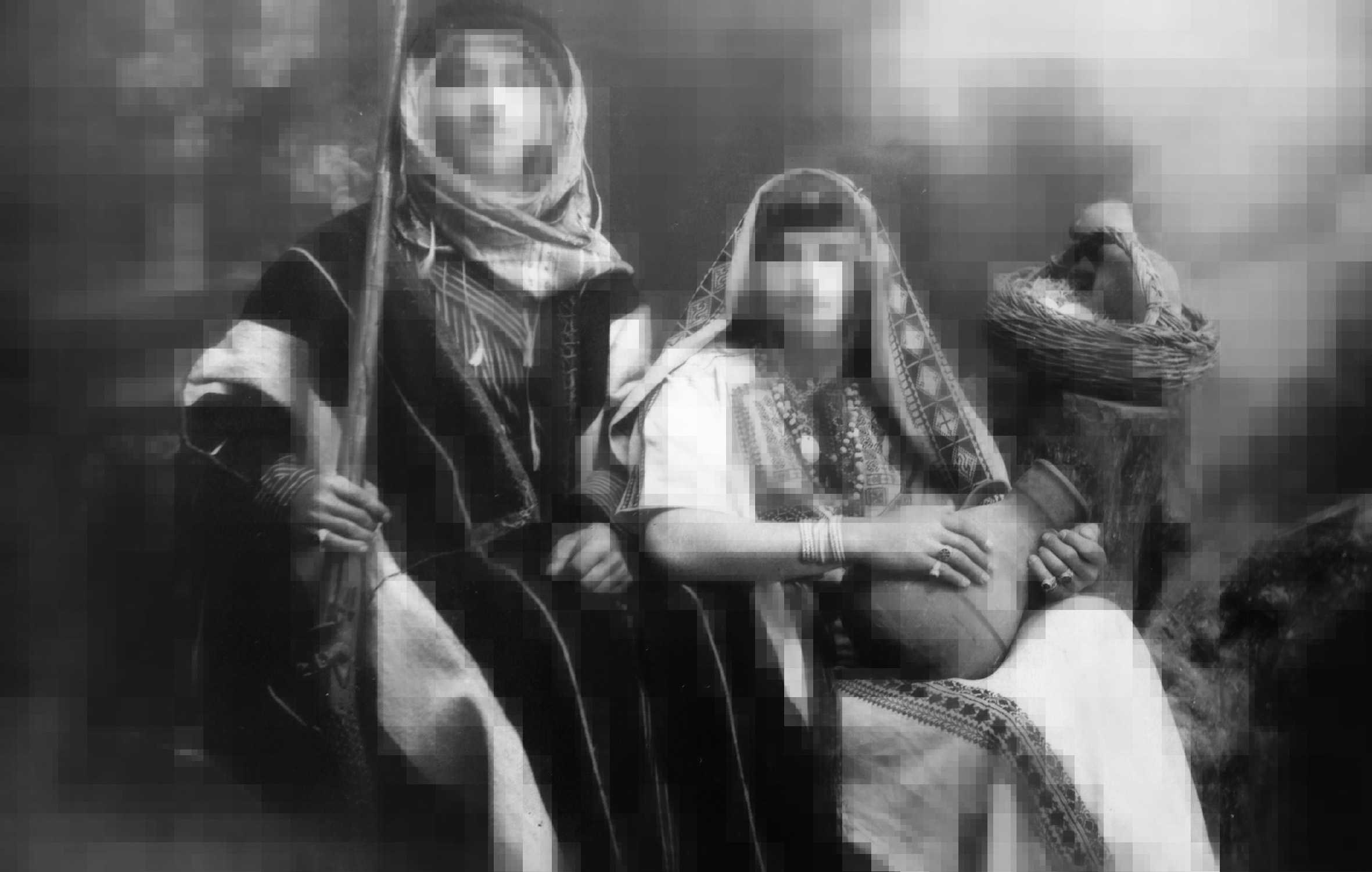 From around the late 19th century a number of studio photographers in Jerusalem, Jaffa and other cities began to offer portraits in what was couched as ‘traditional’ costumes, provided by the studio. The phenomenon has been described as ‘cultural cross dressing’ and analysed primarily as an Orientalist phenomenon targeted at Western tourists and visitors to the region. Significantly less attention has been paid to participation in the practice by local Arab and Armenian populations.

The act of donning ‘traditional’ clothing for urban Palestinians was in fact a transgressive act, not so much culturally as with their western counterparts, but rather in terms of class. The misconstrual of such images today as authentic documents speaks to the lack of understanding of the modern urban middle classes who commissioned such photos. Indeed, a matrix of class and modernity distanced these urban middle class Palestinians from such costumes that – by this period – were seen as the purvey of the rural or the working classes.

Working with images drawn from Palestinian family photo albums, this series explores questions of identity and authenticity in images of ‘cultural cross dressing’. What emerges in these photos is the ways in which urban Palestinians related to their rural compatriots, the perceived authenticity of fellah identity, and a very modern process of reconstructing the past in line with the nationalism of the Nahda.

The pixilation of figures in this series disrupts the act of spectatorship, obscuring faces and bodies, but also intentionally references mosaics. With the growth of archaeological institutes in the region in the late 19th and early 20th century, a series of debates arose about the re-laying of Byzantine mosaics in churches in the West Bank and Jordan to remove human figures with the beginning of Umayyad rule. Western scholars argued that churches were forced to remove human figures in deference to Islamic proscription. Such theses were later debunked given that much of Umayyad visual culture included human figures. More recent scholarship has argued that the re-laid mosaics are likely an outcome of cultural syncretism as process of conversion took place in the early Islamic period. By conjuring the mosaics through pixilation, this series attempts to draw longitudinal correlation between Palestinian bodies, their effacement and periods of rapid cultural change.

Pages: 1 2 3 4 5 6 7 8 9 10 11 12 13 14 15 16 17
This entry was posted in ARTWORKS and tagged Auguste Salzmann, Frank Scholten, Kazimir Malevich, Kerry Leonard, Maartje Alders, Sary Zananiri. Bookmark the permalink.
Sary Zananiri is an artist and cultural historian. He completed a PhD in Fine Arts at Monash University in 2014 looking at Western biblified imaging of the Palestinian landscape. His research interests sit at the intersection of nationalism, colonialism, indigeneity, religious narrative and visual culture, with a particular focus on photography. He has undertaken numerous residencies in recent years including at the Camargo Foundation, France (2022), Al Mamal Foundation, Jerusalem (2019 and 2020) and the Australian Archaeological Institute in Athens (2019). He has co-edited two books with Karène Sanchez Summerer Imaging and Imagining Palestine: Photography, Modernity and the Biblical Lens (Brill, 2021) and European Cultural Diplomacy and Arab Christians in Palestine: Between Contention and Connection. He is currently a Postdoctoral Researcher on the NWO funded project CrossRoads: European Cultural Diplomacy and Arab Christians in Palestine 1918-1948 and the Netherlands Institute for the Near East at Leiden University, and an Honorary Research Fellow of the Australian Archaeological Institute in Athens.