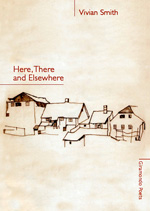 Here, There and Everywhere by Vivian Smith
Giramondo, 2012

It’s a long time since I’ve read Gaston Bachelard’s The Poetics of Space, but I find myself lifting it off the shelf again and flicking through the contents page. I’ve been reading Vivian Smith’s new book, Here, There and Elsewhere, a reflective collection that is mostly linked by notions of memory, age and time, enduring themes that Smith handles with dignity and sleight of hand. But space is interestingly also central to this collection, in subject as well as craft. In Bachelardian fashion, Smith, in many of these works ‘explores the significance of the various kinds of space that attract and concentrate the poetic imagination’ (The Poetics of Space. Beacon Press, 1964). It’s not surprising therefore, that almost all of the poems in this book are sonnets, the poetic form which to my mind makes the most adroit demands on space.

The collection opens with ten poems written from the point of view of Ern Malley who is notably dislocated and outside of any defined space or place. While much has been written about this notorious literary hoax, Smith offers us something new here (Peter Carey’s more oblique angle in My Life As A Hoax not withstanding). Ironically, given that he was born of reactionism, this new avatar selects the traditional form of the sonnet, mostly Shakespearean, in which to further the fiction. Smith’s Malley character is complex. He identifies, like Nolan and Tucker, with parrots, their sagacity and defiant refusal to fit in:

Ambiguously ‘obsessed with passing youth’ (‘I lived with those’), Smith’s Malley is one ‘whom labels didn’t fit’.

The sequence finishes with a deft, sardonic undercut in the final couplet of ‘Sydney’s portrait’. These poems are well worth reading.

The second group, Diary without Dates, contains mostly memories and reflections. These poems are more typical of Smith’s tone and oeuvre: elegant, deceptively simple, drawing on a long life of friendships, literature and travel. Rhythmically they are impeccable. Smith’s characteristic quiet modulation and understatement (with the single exception of ‘Train to Leura’) that evoke the conscious moment with crystalline clarity can take one by surprise with their sardonic force. This is particularly so in the more personal poems, and most so in those about time and growing older:

The three poems that make up the final section of poetry are about spaces that attract the artistic imagination. Each one is named after a house of cultural significance on Capri – Rilke’s Villa Discopoli, Zum Kater Hiddigeigei, the first literary coffee bar on the island and Casa Malaparte that starred in Jean-Luc Godard’s Contempt.

Their theme continues but in prose rather than verse. The second half of this book is comprised of two essays, one of which is a virtual tour through three of Pablo Neruda’s houses in Chile, now all national monuments. This meandering and thoughtful homage to Neruda, his political and literary history, is evocative in its physical detail and interesting as a study of one author’s curiosity about another. Like the Capri poems, this reflection on domestic space resonates back to earlier poems in the collection that depict interiors or filmic exteriors like Cocteau unveiling Picasso’s Muse’s Head in a small square in St Germain.

The other essay is set in the Tasmanian Museum and Art Gallery in 1953. It tells the story of ‘the most important exhibition of paintings to come to Australia after the Second World War’, a large collection of modern French art, which almost ended up at the bottom of Wineglass Bay when the freighter which was carrying the paintings ran aground. This is elegantly written and a nice sliver of Australian cultural history.

Inherent through all the pages of Here, There and Elsewhere is the clarity and timbre of Vivian Smith’s unhurried, urbane voice. The writing is both musical and highly visual in its detail and positioning of elements. A number of the poems as well as the essays reference artworks and artists. One has a sense that these works have evolved out of a lifetime’s love of visual as much as literary art.

This entry was posted in BOOK REVIEWS and tagged Sarah Day, Vivian Smith. Bookmark the permalink.
Sarah Day’s most recent book is Tempo (Puncher & Wattmann, 2013); it was shortlisted for the Prime Minister’s Literary Awards and won the University of Melbourne Wesley Michelle Wright Prize. She lives in Hobart where she teaches Year 12 Creative Writing. Her poems have been widely anthologised in Australia and overseas.